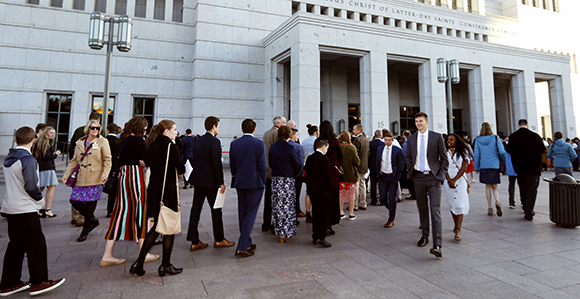 People enter the Conference Center for the Sunday morning session of the 189th Semiannual General Conference of The Church of Jesus Christ of Latter-day Saints in Salt Lake City on Sunday, October 6, 2019. Photo by Laura Seitz, Deseret News.

The First Presidency has announced a session change to the upcoming April 2020 general conference, with the Saturday evening session available for all members of the Church, ages 11 and up.

In a letter dated November 22, the First Presidency said, “Rather than having the priesthood session or the general women’s session, the Saturday evening session will be held for all members of the Young Women and Relief Society, and all holders of the Aaronic Priesthood and the Melchizedek Priesthood.

“We look forward to commemorating with members of the Church the 200th anniversary of the Restoration of the gospel of Jesus Christ at this historic conference and throughout the year 2020.”

“In the next six months, I hope that every member and every family will prepare for a unique conference that will commemorate the very foundations of the restored gospel,” he said.

“We are confident this change will be a blessing in the lives of members throughout the Church,” the October 2017 First Presidency letter stated.

General conference has been established as a two-day, weekend event since 1977, with two general sessions each day and a priesthood meeting Saturday evening. In 1986, annual general Relief Society meetings were added and held the Saturday before general conference, according to a Church News article.

Then, in November 2013, the First Presidency announced that a semiannual women’s session—now part of general conference—would replace both the general Relief Society and general Young Women meetings. The first-ever women’s session for women, young women, and girls ages 8 and older was held on March 29, 2014.