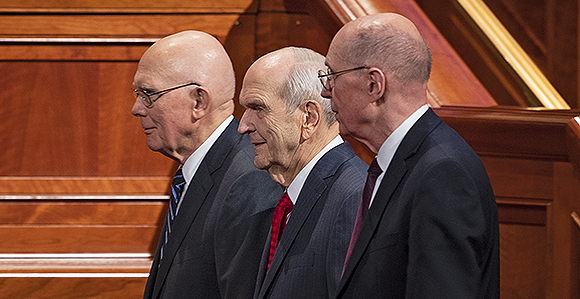 President Russell M. Nelson of The Church of Jesus Christ of Latter-day Saints and his counselors, President Dallin H. Oaks (left) and President Henry B. Eyring (right), enter the Conference Center in Salt Lake City, Utah, for a session of the April 2019 general conference.

The First Presidency has announced changes in the Church’s area leadership assignments, which will become effective on August 1, 2019.

All members of Area Presidencies are General Authority Seventies or Area Seventies.

The First Presidency also announced that seven areas in the United States and Canada will be combined into three areas.