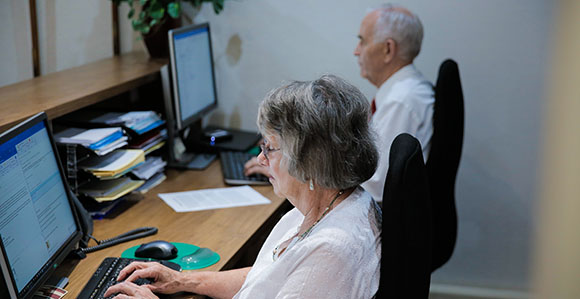 Senior missionaries are working all around the world to preserve records digitally so people can find their family histories.

“We really, incredibly feel the Spirit when we are gathering the records so people can find their family.” —Sister Raelynn Klafke, records preservation senior missionary

Editor’s note: The following is the first article in a new series titled “Finding Your Senior Mission” that explores various service opportunities open to senior missionaries.

James and Rosalie Taylor knew they wanted to serve a mission. But they hesitated, knowing that the only way they could serve would be if they took their adult son with disabilities with them.

“When we started looking for senior missionary opportunities, we were specifically looking for something that he could do with us,” Sister Taylor said. “And he has really great computer skills.”

After exploring service opportunities on the senior missionary service website, the Taylors submitted their mission papers and were called to the Indiana Indianapolis Mission. They worked with several other senior companionships to scan genealogical books for FamilySearch in Fort Wayne at the Allen County Public Library.

Russell, the Taylors’ 24-year-old son with Down syndrome, served with them.

Sister Taylor said serving with Russell was “very meaningful, because even as we shopped at the store, people would approach us or approach him with his missionary badge and interact with us. They were interested in what he was doing and why he was here. And members of the Church that had disabled children would come up to us and be so excited to see that it was possible for them to serve a mission with their child.”

Craig and Renae Hawker served a more traditional records preservation mission working at the Clayton Library of Genealogical Research in Houston, Texas. Elder Hawker scanned the books that Sister Hawker brought to him from the library.

“I think what I liked best was the fact that my husband and I could spend so much time together,” said Sister Hawker. “We have never been able to serve and be together so much because of work and whatever. It was wonderful to spend that time together.”

They also enjoyed getting to know and care about the people that were in the mission working alongside them.

Records preservation is all about family history

As senior missionaries work to scan valuable records, it’s not uncommon for them to find records with names of their own family or of others in the mission.

“As you picked up a book and turned pages, you would find your own family names,” said Sister Taylor. “But you also would read stories about families that just touched your heart, and you knew that these people wanted to be sealed.”

One day while attending a local farmers market, the Taylors recognized the name of one of the vendors they were speaking to. To the man’s surprise and delight, Elder Taylor was able to pull up a page online from a book he had recently scanned with some of the vendor’s family history. From then on, the vendor made sure to say hello every time the Taylors visited the farmers market. “We built up a relationship with him,” said Sister Taylor. “Those relationships are meaningful to us.”

Sister Klafke and Sister Rife both testified of the Spirit of their work in records preservation as an important part of family history.

“All the work of the Lord is important, and I truly feel that. But we really, incredibly feel the Spirit when we are gathering the records so people can find their family,” said Sister Klafke.

The friends’ experiences have taught them the essence of a records preservation mission: “Don’t have any preconceived ideas, and be prepared to be sensitive to the Spirit. Each records preservation location is different. There are never any two experiences that are just exactly the same,” said Sister Rife. “You will go where it’ll become personal for you.”

The senior missionaries have come across family names several times in their years of service and have learned stories of their own families. Sister Klafke found the name of a family member when they were serving in Australia even though she had not known her family had connections to the country. The experience confirmed to her that she was called to Australia for a reason.

The work is not always easy and requires physical dedication to digitizing the records.

“It’s a physically demanding job,” Sister Klafke. “In the first three months, you’ll be more tired than you ever thought you could possibly be. And then one day you’ll wake up and it’ll all be better. And you think, ‘I’m just standing and clicking a camera.’ But there’s 100 things to think about with every single picture and it tires you out.”

Even though the mission can be difficult, the rewards outweigh the costs.

Senior missionaries Elder and Sister Hawker felt the impact they made as they served at the Clayton Library of Genealogical Research.

“The library has 100,000 books in it, and they are all connected to genealogy in some way or another,” said Sister Hawker.

The Taylors and the other missionaries serving in the library together scanned well over 5,000 books—close to 1.8 million pages. For every page, there are an average of 10 names, dates, and places concerning individuals, says Elder Taylor. “That’s roughly 18 million names of people that are now available for temple work to be done or stories to be known about family history.”

“Russell alone did over 1,500 books himself and almost 230,000 pages of work,” said Sister Taylor. “Sometimes the work is monotonous and tedious, but when you think of the amount of information that’s being made available for everyone, anywhere in the world, it becomes pretty incredible.”

Elder Taylor added, “On one occasion while visiting the Indiana Temple, it became very clear to me that this is why we’re doing what we’re doing. Because but for someone doing this monotonous, tedious scanning and making these names available, some of these names would never ever show up on the temple records.”

Despite differences in each type and location of records preservation missions, experienced senior missionaries had similar advice: “Get really involved with the young missionaries. It helps you get the while feeling of missionary work, and the young people are amazing,” said Sister Hawker.

Sister Taylor said, “I would recommend that anyone going out get as involved as you can with the missionaries. It was a great thing to be involved with their work.”

Elder Taylor found that he and his companion were even able to help young missionaries through hard trials.

“Some missionaries struggle with emotional issues and things like that, and as grandparent-age people, we can help counsel and strengthen and encourage them,” said Elder Taylor.

Sister Klafke and Sister Rife find more time to work with the missionaries than many other records preservation missionaries because time is limited at the Spanish archive.

“We end up spending a lot of time with our young missionaries working with them on FamilySearch or participating in district meetings. We also work with their investigators or new members on FamilySearch so that the first time they go to the temple, they can take their own family names,” said Sister Klafke.

Elder Taylor encourages anyone considering serving a senior mission to “just go. Heavenly Father wants us to serve.” As far as worrying about children and family at home, Elder Taylor said, “[God] will take care of everybody. Our kids thrived. It was a great example for our kids.” The Taylors said they are glad they did not wait to serve because of the blessings their family experienced and the good health they enjoyed.

“Records preservation is so important,” said Sister Hawker. “And I think it is amazing that the Church is making this available for people who may want to do something kind of different.” 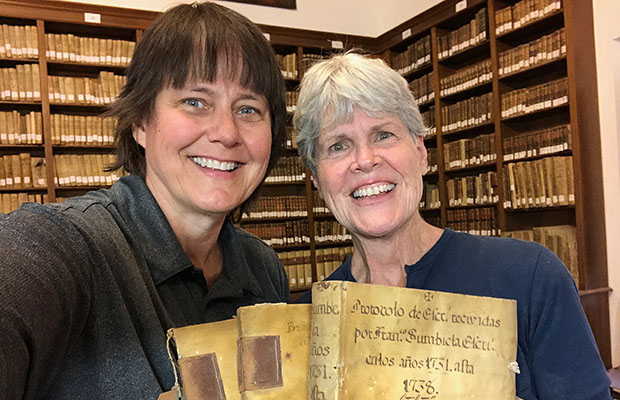 Senior missionaries Sister Klafke and Sister Rife hold the last three books from the 18th-century selection of the archive. The two friends are currently serving a records preservation mission in Spain. Photo courtesy of Raelynn Klafke. 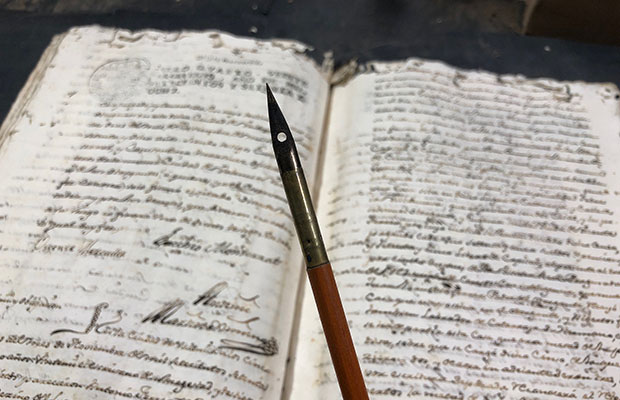 A pen found in a book from the 1700s. Senior missionaries Sister Rife and Sister Klafke are currently serving in Spain on a records preservation mission. Photo courtesy of Raelynn Klafke. 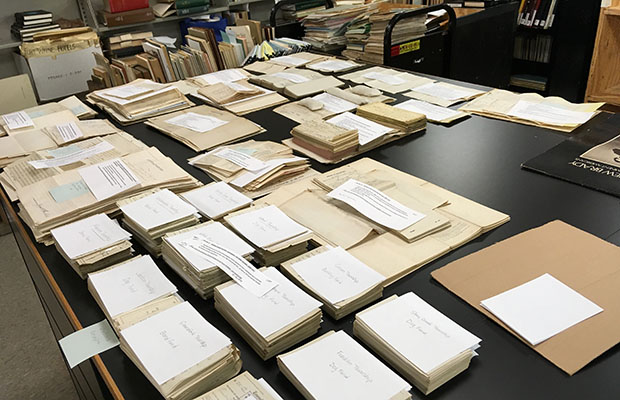 Piles of documents are ready to be scanned at the Allen County Public Library in Fort Wayne, Indiana. The Taylors served a records preservation with their disabled adult son in the Indianapolis Indiana Mission. Photo courtesy of Rosalie Taylor.