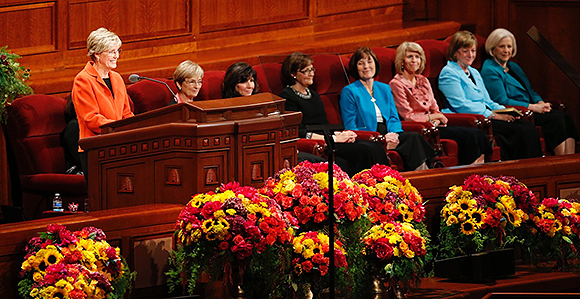 “[God] loves you not only for who you are this very day, but also for the person of glory and light you have the potential and the desire to become.” —President Dieter F. Uchtdorf of the First Presidency

Speaking during the general women’s meeting, President Uchtdorf, Second Counselor in the First Presidency, said he hopes women worldwide will experience a renewed and an expanded measure of the love of God in their lives—“that you will find the faith, determination, and commitment to learn God’s commandments, treasure them in your hearts, and live the gospel joyful. I promise that as you do so, you will discover your best self—your real self.”

Thousands forged heavy rain and filled the Conference Center in downtown Salt Lake City for the meeting, which was translated in to 55 languages and sent to millions around the world via television, radio, and the Internet.

President Thomas S. Monson presided at the broadcast, which was also attended by President Henry B. Eyring, First Counselor in the First Presidency; other Church leaders; and members of the Relief Society, Young Women, and Primary general presidencies and boards. The meeting also marked the first time all the members of the Young Women general board—which includes several members who live and serve outside of Utah—were present in the Conference Center.

The First Presidency announced last November that the semiannual general women’s meeting would replace the general Relief Society and general Young Women meetings. All women, young women, and girls eight years of age and older were invited to participate in the combined meeting—the second of its kind.

During his remarks, President Uchtdorf said that pondering the truth that they are children of heavenly parents will fill women with a sense of origin, purpose, and destiny.

The promised blessings of God to the faithful are glorious and inspiring, he said. “And it takes more than a spiritual birth certificate or a child of God membership card to qualify for these incomprehensible blessings.”

For this reason, he said, he would speak on walking the path of discipleship and of obedience to God’s commandments.

President Uchtdorf said if Church members truly believe the great mission of their Heavenly Father is to exalt and glorify His children and that He knows best how to do it, doesn’t it make sense for them to embrace and follow His commandments?

“We need to accept that the commandments of God aren’t just a long list of good ideas. They aren’t ‘life hacks’ from an Internet blog or motivational quotes from a Pinterest board. They are divine counsel, based on eternal truths.”

President Uchtdorf said once people understand the true nature of God and His commandments, they will also better understand themselves and the divine purpose of their existence. He promised the women that the Lord knows of their successes and cherishes them.

“Do you suppose it matters to our Heavenly Father whether your makeup, clothes, hair, and nails are perfect? Do you think your value to him changes based on how many followers you have on Instagram or Pinterest? Do you think He wants you to worry or get depressed if some un-friend or un-follow you on Facebook or Twitter? Do you think outward attractiveness, your dress size, or popularity make the slightest difference in your worth to the one who created the universe? He loves you not only for who you are this very day but also for the person of glory and light you have the potential and the desire to become.”

During her remarks, Sister Burton said as LDS women prepare themselves to worthily enter the temple and are faithful to temple covenants, the Lord will bestow “a multiplicity of blessings” upon them.

“It is my prayer that for us, going to the temple will be much more than a one-time event,” she said. “May we prepare to worthily receive saving ordinances drop by drop and keep the associated covenants wholeheartedly. As we do so, I know we will qualify to receive the promised blessings of a fulness of the Holy Ghost and the power of the Lord in our homes and individual lives.”

Sister Marriott said as faithful women give voice to truth and share their light they are able to push back the darkness of the world.

“Do you know how important you are? Every one of you—right now—is valuable and essential in Heavenly Father’s plan of salvation,” she said. “We have a work to do. We know the truth of the restored gospel. Are we ready to defend that truth? We need to live it; we need to share it. We must stand firm in our faith and lift our voices to proclaim true doctrine.”

Sister Stevens spoke of the importance of making and keeping covenants.

“Covenants with God help us to know who we really are,” she said. “They connect us to Him in a personal way where we come to feel our value in His sight and our place in His kingdom. In a way we can’t fully comprehend, we are known and loved individually by Him. Just think of it—each of us holds such a place in His heart. His desire is that we will choose the path that will bring us home to Him.”