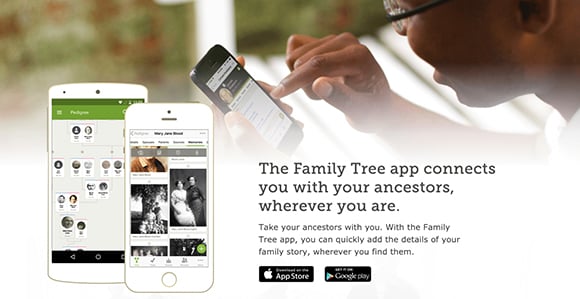 “I had not done any family history previous to this. … It’s brought a peace into my life that never would have been there otherwise. … I feel like it’s a miracle and such a blessing to be alive during this age.” —Amy Miles, FamilySearch Tree app user

Amy Miles could talk for hours about how the FamilySearch Tree mobile app has enriched her life.

For the past year, the 42-year-old wife and mother of four has opened the app on her smartphone whenever she has time—waiting for kids in the carpool line at school, showing Relief Society sisters how to use one of the features, and when interacting with her children during fun family home evening activities.

Engaging the app also helped Miles to find comfort and healing when her husband suffered a brain aneurysm.

“I had not done any family history previous to this. … It’s brought a peace into my life that never would have been there otherwise,” Miles said. “I feel like it’s a miracle and such a blessing to be alive during this age. Yes, there are things that are scary. But Heavenly Father has accounted for that. He’s given us tools that are actually stronger than what the adversary can throw at us. We just need to use them. This is definitely one of those tools. I feel it’s underutilized.”

Since its launch in July 2014, more than 4 million users have downloaded the free FamilySearch Tree mobile app. It averages 700,000 monthly users, most of which fall in the 20–45 age range. The mobile app can also do 90 percent of the functions a user can find using the web on a desktop or laptop computer, according to FamilySearch.

“I think the app brings people to family history who otherwise wouldn’t have come to family history,” said Wendy Smedley, FamilySearch marketing manager. “You can do many of the same things on the mobile app as you can on a desktop computer or laptop. The app feels less intimidating. It’s a simplified experience. It’s intended for people who want to do something quickly.”

FamilySearch is planning some additional app developments for 2019, including simpler ways to review and attach sources and new discovery features that designers hope will enhance the overall user experience. Users can expect to learn more about new app developments while attending RootsTech, February 27 through March 2, in Salt Lake City.

In recent years the FamilySearch Tree mobile app has become a nifty way for members of The Church of Jesus Christ of Latter-day Saints to learn about ancestors as well as find and prepare names to take to the temple.

“It’s allowing people to engage in family history when they have just a couple of minutes, on the go,” Powell said. “It’s the relative ease and availability of having the app with them at any time they want.”

One of the two more popular features is called “Relatives Around Me.” When a group of people log into the app, they hit the “scan” button and see how they are related to others within a 100-foot radius.

This turned out to be an exciting activity for Garland, Utah, resident Carla Jeppesen and others at a recent Relief Society activity. She joked that it would be fun to try at stake conference, although the Wi-Fi would likely crash.

“It was fun to see who was related. Granted, they were eighth and ninth cousins, but it was still fun to see the connection. It gets you to go one step further and start looking in your family tree,” Jeppesen said. “One sister said she was a convert and didn’t have any relations. She was a little discouraged. We helped her do it and she found a couple of people that were related. She was excited.”

A second popular feature is “Ordinances Ready,” which makes it simple for Latter-day Saints to find and prepare an ancestor’s name for a trip to the temple.

“The experience really lends itself to the mobile app and allows you to do it [find and prepare names] quickly,” Smedley said. “We hope this becomes the norm for members.”

A third feature is “Map My Ancestors.” Using GPS technology, users can log in and access a map to discover where ancestors lived and died, including cemeteries where they are buried, depending on their location.

On a road trip to Arizona last summer, Powell used this app feature to locate the burial spots of a great-great-grandfather and children who were great-aunts and uncles, he said.

“It was a really neat experience for us,” Powell said.

Then there’s the main feature people like to use, Powell said, which for Miles is her “absolute most favorite” feature on the FamilySearch Tree app. It’s called “Tasks,” a check-mark symbol at the bottom of the screen. This feature allows users to view new ancestor hints or prepare ancestral ordinances for the temple.

With much of her ancestors’ temple work already done, Miles started becoming familiar with her family lines by attaching documents, like a birth or death certificate. Much to her delight, in the process of doing this, Miles discovered more than 300 family names needing temple ordinances, she said.

Miles “dove into family history work” after her husband was diagnosed with what she described as a “complex” brain aneurysm. In performing this sacred work she felt the power of words spoken by Elder Dale G. Renlund of the Quorum of the Twelve Apostles in April 2018: “Family history and temple work provided the power to heal that which needed healing” (“Family History and Temple Work: Sealing and Healing”).

“Everyone could use a bit of heaven’s help,” Miles said.

Smedley felt the same heavenly support while facing a difficult personal struggle. At a time when she felt particularly alone and isolated, Smedley was using the tree app and found an ancestor who had experienced the very same challenge. The discovery forged a strong spiritual bond that has helped her to keep going, she said.

“It stayed with me … and I knew it would be OK,” Smedley said. “I had a profound sense of not being alone. I think that’s why people love the temple and doing family history work, because it deepens and builds your family connections. It builds love, and you feel less alone.”