FamilySearch Donates 400 Years of Digitized Catholic Records in the Philippines 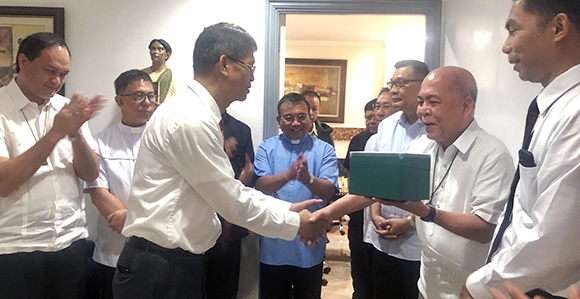 Elder Aretemio Maligon, Area Seventy, shakes the hand of Archbishop Romulo Valles, president of the Catholic Bishops’ Conference of the Philippines (CBCP). Felvir Ordinario (extreme right), family history manager, and other Catholic archbishops look on during the handover of the digitized records on September 18 at CBCP headquarters.

A collection of more than 14 million digital images spanning over 400 years of Filipino historical records was turned over to the Catholic Bishops’ Conference of the Philippines (CBCP) by FamilySearch.

The preservation project, which took more than four decades to complete, was a collaboration between FamilySearch, the Catholic church, the Archives of the University of Santo Tomas (AUST), and historical demographers.

“FamilySearch wants to help all people find joy in discovering their ancestors, and we hope that providing a digitized copy of these records to the Catholic church will facilitate better accessibility to the collection for more people,” said Ann Harrison, FamilySearch regional manager for the Asia Pacific Area.

“We also hope that more archives will become aware of and take advantage of FamilySearch records preservation services.”

The digital collection features records ranging from 1614 to 2014 gathered from dioceses and parishes around the Philippines. Records such as birth, marriage, and death certificates and other parish records, decrees, and inventories of church items are included.

Felvir Ordinario, FamilySearch manager in the Philippines, said microfilming began in the 1970s until about 2009, when records were then captured natively in a digital format.

Hard drives containing the digitized records were presented during a hand-over event at the CBCP headquarters in Intramuros in the city of Manila on September 18. Ordinario represented FamilySearch at the event.

The event was also attended by Elder Aretemio C. Maligon, an Area Seventy of The Church of Jesus Christ of Latter-day Saints; Archbishop Romulo Valles of the CBCP, and members of its permanent council; Professor Regalado Trota-Jose of the AUST; and Haidi Fajardo, Church Public Affairs director in the Philippines.

“We are very grateful to FamilySearch and the Church of Jesus Christ for these records,” Valles told BusinessMirror, a media outlet in the Philippines. “I’m sure this will be a great help to us and for the coming years.”

The coordinated preservation project has dispelled a lot of misconceptions about the Church, Ordinario said.

“When they finally understand that we’re doing it because of our regard for the family and the nature of the family, they have a greater sense of appreciation for our Church in general,” he said. “I think that goes a long way as well in terms of public perception, that we do treat everyone with kindness and we do acts of service.”

Many local archives struggle with record preservation due to a lack of funding and resources. When they find out that FamilySearch can help digitize, store, and publish their records, “it really surprises them and makes them very thankful,” Ordinario said.

Harrison said FamilySearch has been collecting and preserving genealogical records around the world for decades.

“If disaster hits an archive, destroying their records, FamilySearch can restore digital copies of these records if we’ve collected them prior,” she said. “We’ve seen this situation in the Philippines. We hope that more archives will take advantage of FamilySearch’s preservation services as a safeguard.”

The year 2021 will mark the quincentennial of the coming of the Spaniards and Christianity to the Philippines. Many institutions in the country are gearing up for this commemoration, Ordinario said.

“This donation builds up to that celebration and will hopefully emphasize the importance of keeping records and preserving them properly so that we can recount our history well,” he said.

Ordinario said FamilySearch is now planning for a donation to the National Archives of the Philippines—and it is expected to be an even bigger volume than the collection given to the CBCP. 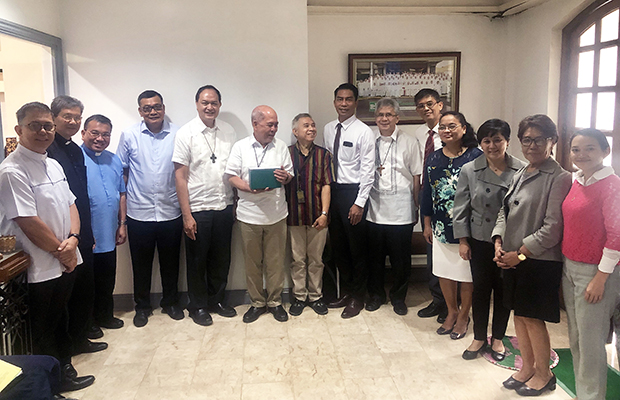 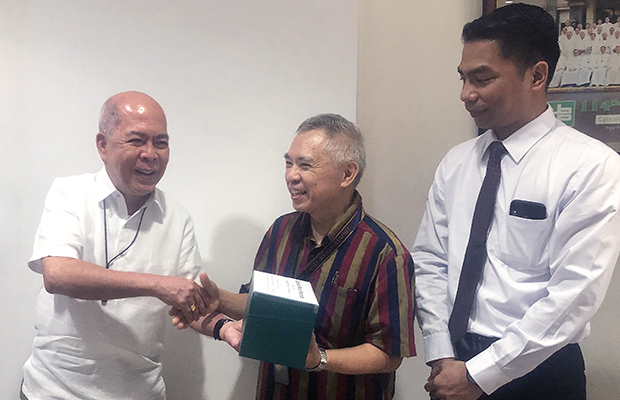 His Excellency Archbishop Romulo Valles turns over hard drives containing a collection of 14 million images to archivist Professor Regalado Trota Jose of the Archives of the University of Santo Tomas (AUST), where the records will be stored.