“I think people were drawn to him because he didn’t have a hidden agenda. He was just out to build the Church. … He was selfless in that respect.” —Lee Tom Perry, son

Ask Sister Barbara Taylor Dayton Perry about how she met her late husband, Elder L. Tom Perry, and her face lights up with a big smile.

In January 1976, Barbara was 43 years old and a member of BYU’s Nursing School faculty. A few months earlier she had asked her father for a blessing and was told she would have a “glorious year.” Then a cousin approached her about the idea of having a dinner date with Elder Perry, a member of the Quorum of Twelve Apostles.

The thought scared her, but how could she pass on such an opportunity?

Elder Perry’s wife, Sister Virginia Perry, died of cancer in December 1974. A little over a year later, President Spencer W. Kimball counseled the 53-year-old Apostle to begin looking for a new wife. During his conversation with the prophet, Elder Perry asked, “How exactly does an Apostle date?”

Then Elder Perry was approached by Barbara’s cousin about meeting her. When he saw how nervous the cousin was about the subject, the Church leader couldn’t decline the invitation.

After a pleasant evening with easy conversation on January 22, 1976, Elder Perry promised to call again. She was skeptical.

“Yes, I’ve heard that before,” she thought.

Not only did Elder Perry call back, but within a few weeks he surprised Barbara with a less-than-romantic proposal.

“This is right, that’s all there is to it,” he told her as they sat together in a car. “Please don’t say anything to anybody until I talk to your folks.”

They were married in the Salt Lake Temple by President Ezra Taft Benson on April 28, 1976, in a “brief but beautiful” ceremony with several General Authorities in attendance. Within a few weeks, Sister Barbara Perry had a new passport and traveled with her new husband on a Church assignment to Brazil, the first of many such trips over the next four decades.

“He was always so good to me,” she said, dabbing tears with a tissue. “I’ll be forever grateful.”

The account of the Perrys’ short courtship and marriage is found in the opening pages of his recently released biography, L. Tom Perry, an Uncommon Life, Vol. 2: Years of Hastening the Work of Salvation.

Volume 2 recounts the apostolic ministry of Elder Perry from 1976 to his death in 2015 and is the sequel to L. Tom Perry, an Uncommon Life, Vol. 1: Years of Preparation, 1922-1976, which was published in 2013. Both books were authored by the Apostle's son, Lee Tom Perry, who recently stepped down as the dean of BYU's Marriott School of Business.

“He was larger than life, even to us,” Lee Perry said. “We’re delighted to have this book.”

Sister Perry, who celebrated her 87th birthday on October 11, was equally thrilled to see the second half of the biography published. Copies of both volumes sit on an end table in her apartment, not far from a large portrait on the wall depicting Elder Perry as a newly called Apostle. In another room, she keeps two bottles that used to sit on her husband’s desk in the Church Administration Building—one with sand from a beach in Saipan and the other with coral from Iwo Jima.

The family still marvels at how fast their husband and father went from being a healthy and robust 92-year-old to a terminal cancer diagnosis and death in a matter of months. The series of events leading up to his death are described in “Years of Hastening the Work of Salvation.”

“For him I think it was a blessing,” said Sister Perry, who still enjoys good health herself. “He wouldn’t have done well with a prolonged illness. He wanted to be up and doing.”

Lee Perry recalled his father having hip replacement surgery and recovering in time to speak at a family member’s funeral within two weeks.

“We thought he was immortal at that point,” Lee Perry said. “He had amazing health and vitality. I think a lot of it stems from the fact that he just wouldn’t allow himself to grow old. He was enthusiastic, loved life, and felt a big responsibility.”

Before he died, Elder Perry was able to review 17 of the second volume’s 22 chapters, which made the experience of writing these books extra special for his son.

“For me, the joyful part of this whole experience was showing it to my father,” Lee Perry said. “It was clearly worth the effort just to have him see his uncommon life.”

There was plenty of material to draw from for the book. In addition to his Church assignments, general conference talks, and family life, people have shared numerous “Elder Perry stories” over the years, Lee Perry said.

While shaking hands outside the Salt Lake Tabernacle before a session of general conference, Elder Perry noticed a man in a wheelchair in a long line. Elder Perry found a place for the man inside the already packed venue. The man was so grateful he wrote to Lee Perry about it after Elder Perry died.

“There’s just hundreds of stories about him reaching out,” Lee Perry said.

One photo in the book shows Elder and Sister Perry greeting a family outside the Salt Lake Tabernacle before the Saturday morning session of general conference in April 1990. The six-foot-four Apostle was that friendly wherever he went.

“He loved his freedom to be able to go and mingle with members of the Church,” Sister Perry said. “Tom was so good with people.”

People were drawn to his father, Lee Perry said.

“I think people were drawn to him because he didn’t have a hidden agenda,” he said. “He was just out to build the Church. … He was selfless in that respect.”

As readers dig into the 365-page book, they will learn about Elder Perry’s relationship with the late President Boyd K. Packer, who served as President of the Quorum of Twelve Apostles before his death on July 3, 2015.

“They had an amazing partnership,” Lee Perry said. “I think my dad needed President Packer as much as President Packer needed my dad. It was just this wonderful counterbalance because they were different men but united in their purpose. It was profound what they were able to accomplish together.”

Latter-day Saints might be interested to read about Elder Perry’s “surprise” service as President of the Europe Central Area at age 82. While fellow quorum members Elder Dallin H. Oaks and Elder Jeffrey R. Holland received similar assignments in the Philippines and Chile, President Gordon B. Hinckley’s invitation came as “sort of a bombshell” to Elder Perry, his wife said.

“He wanted to say, ‘President Hinckley, Do you know how old ... ?,” said Lee Perry, his pause mimicking that of his father as the Apostle realized President Hinckley was about 10 years older. “I think that’s the human side of him. But with the Lord’s help, he was willing to expand out and knew he had the Lord’s blessing, so he could do anything.”

Another assignment Elder Perry wasn’t expecting was his appointment to be the chairman of Church’s Public Affairs Department.

“He would get an assignment that was out of his comfort zone. He was a modest and humble enough man to know what he was naturally good at,” Lee Perry said. “It sometimes took him a day or two to wrap his mind around it, then he just charged ahead. That was the pattern I saw time and time again, and public affairs is probably the best example.”

Elder Perry sometimes arranged meetings and outreach activities on his rare weekends off. He would meet with stake presidents, help them establish goals, and follow up with them months later to see how they were doing. His phone calls often shocked the stake presidents, Lee Perry said.

“Some of them weren’t used to that. But it’s the ‘return and report’ that he was so good at,” Lee Perry said. “I’m glad he didn’t follow up with his son on as many things as he did with the stake presidents.”

Elder Perry’s final general conference address in April 2015 was special moment for his family, especially considering the events that would soon follow. The family was worried about him getting through it without coughing and was relieved when he delivered his remarks, “Why Marriage and Family Matter—Everywhere in the World,” so well. His closing testimony was especially powerful.

“Let me close by bearing witness—and my nine decades on this earth fully qualify me to say this—that the older I get, the more I realize that family is the center of life and is the key to eternal happiness” (“Why Marriage and Family Matter—Everywhere in the World”), Elder Perry said.

“It was a tender moment for all of us, especially given the sequence of events that began shortly afterward,” Lee Perry said. “[His words] touched me deeply when he said them, and they continue to lift me. … Perhaps it’s fair to say that his words have meant even more to us in retrospect.”

Instead of reading back through his conference talks, Lee Perry prefers to watch the videos.

“Some days when I need a lift, it’s a blessing to be able to see and hear him,” he said. “I love that I can access them whenever I want.”

Sister Perry and Lee Perry hope this second volume not only gives readers an inside look at his Church service but helps them to remember the smile and warmth of this Apostle.

“He was my best friend. He had a better friend in Barbara,” Lee Perry said. “Traveling with him, seeing him in action for so many years from this front row seat, I count it as one of the greatest blessings of my life.” 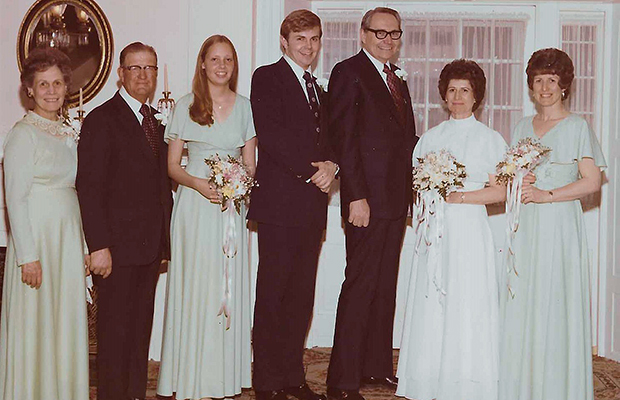 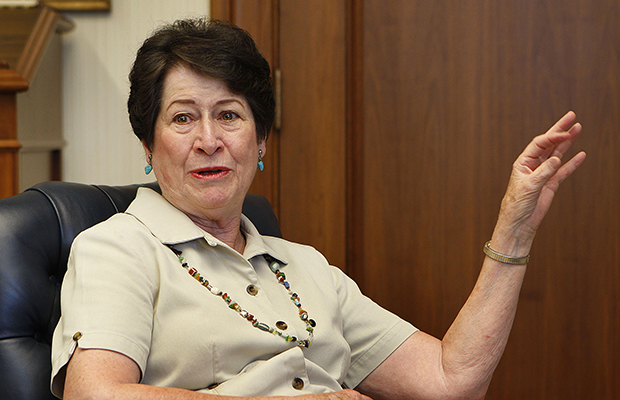 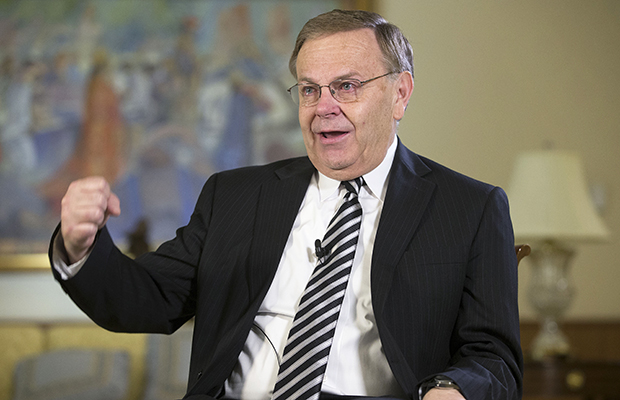 Lee Perry tells of an experience with his father as he talks on Sunday, May 31, 2015, of the passing of Elder L. Tom Perry of the Quorum of the Twelve Apostles during a sit-down talk in the Relief Society auxiliary building in Salt Lake City. Photo by Scott G. Winterton, Deseret News. 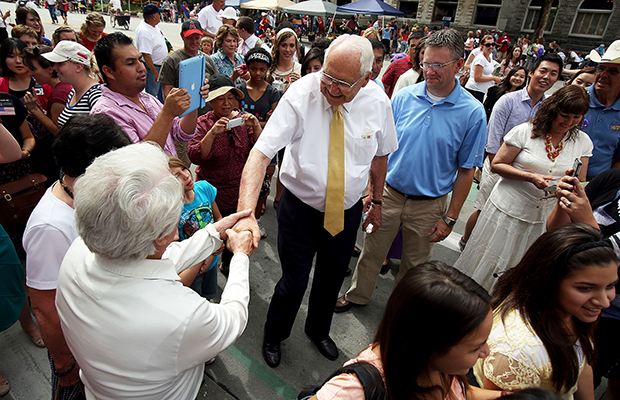 Elder L. Tom Perry is surrounded by people who want to talk to him as he leaves the Days of ’47 Parade in Salt Lake City on Wednesday, July 24, 2013. Photo by Kristin Murphy, Deseret News.