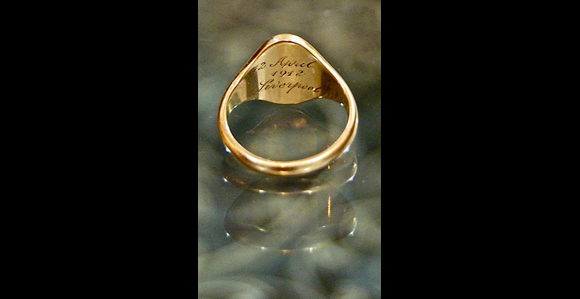 In 1912, days before he was to sail to the United States aboard the Titanic, Elder Alma Sonne—who would later become an assistant to the Quorum of the Twelve Apostles—purchased a ring to commemorate the conclusion of his mission to England. Today, the keepsake reminds Alma’s family of the faith of their ancestor. Photo by David Evans.

This week, people everywhere will remember the voyagers aboard the ill-fated RMS Titanic, the ship that, on its maiden voyage from Southampton, England to New York City, United States, disastrously struck an iceberg on April 14, 1912, and sank early the next morning, resulting in the deaths of more than 1,500 of its passengers.

As the world marks the 100thanniversary of that tragic event, the descendants of Alma Sonne—a former assistant to the Quorum of the Twelve Apostles—will also remember the legacy of faith that their progenitor left behind in notbeing aboard the Titanic.

Elder Quentin L. Cook of the Quorum of the Twelve Apostles—who lived in the Logan, Utah, stake in which Alma Sonne later served as stake president—told Alma’s story this way in the October 2011 general conference:

“When Alma was a young man, he had a friend named Fred who was less active in the Church. They had numerous discussions about serving a mission, and eventually Alma Sonne convinced Fred to prepare and serve. They were both called to the British Mission. At the conclusion of their missions, Elder Sonne, the mission secretary, made the travel arrangements for their return to the United States. He booked passage on the Titanic for himself, Fred, and four other missionaries who had also completed their missions.

“When it came time to travel, for some reason Fred was delayed. Elder Sonne canceled all six bookings to sail on the new luxury liner on its maiden voyage and booked passage on a ship that sailed the next day. The four missionaries, who were excited about traveling on the Titanic, expressed their disappointment. Elder Sonne’s answer paraphrased the account of Joseph and his brothers in Egypt recorded in Genesis:‘How can we return to our families and the lad be not with us?’ He explained to his companions that they all came to England together and they all should return home together. Elder Sonne subsequently learned of the Titanic’s sinking and gratefully said to his friend Fred, ‘You saved my life.’ Fred replied, ‘No, by getting me on this mission, you saved my life.’ All of the missionaries thanked the Lord for preserving them.”

Elder Cook continued: “Sometimes, as was the case with Elder Sonne and his missionary associates, great blessings come to those who are faithful. We should be grateful for all the tender mercies that come into our lives.”

One of Alma’s grandchildren, Scott Sonne of California, said he has learned an important lesson about such tender mercies from the Titanic story that he has heard told in his family since his early teens.

“One thing I associate with [my grandfather’s story] is the principle that what seems bad may turn out to be good, and that from our mortal perspective we should be slow to consider a particular event a misfortune,” he said. “This is the message of Genesis 50:20, where Joseph described his brothers’ mistreatment by saying, ‘Ye thought evil against me; but God meant it unto good.’

“I’m sure that at the time Grandpa Sonne might have thought that missing the Titanicvoyage was a misfortune, only to learn that in fact it was intended for his good.”

Scott’s brother Alan Sonne, also of California, recognizes that his existence today is a result the Lord’s tender mercies and his grandfather’s faith.

“I don’t know how long Alma Sonne spent deliberating on his choice to cancel the Titanictickets,” Alan said. “It must have been no more than a matter of hours, maybe even minutes, because the Titanic was to sail the next day.

“But the power of that small decision affected the lives, the very existence, of about 100 descendants,” he continued. “No decision, no us.” (That number, Brother Sonne notes, increases significantly when the posterity of Alma’s friends is also considered.)

“Despite all the wonders of the Titanic, the saving qualities for Elder Sonne and his friends were interpersonal and matters of character and spirit, just like they are today,” Alan said. “This cautions me to regard the outcome of even small acts and words that affect others (and myself). Small decisions may not have small consequences.”

A Reminder of a Faithful Ancestor

The lessons stemming from the story of Alma became even more concrete to Alan four years ago when he received a small package in the mail from an uncle, Alma Sonne, Jr. The package contained a gold ring with the initials AS engraved on the outside and the words “12 April 1912 Liverpool” on the inside. With it was a typewritten explanation, which Alan confirmed with relatives.

He learned that before Alma and his companions left England passing up passage on theTitanic, Alma had purchased and engraved the ring to commemorate finishing his mission. Thereafter, Alan said, it became a symbol to him of listening to promptings, devotion to friends, and his faith.

Alan reports that Alma’s children never saw him without it on his finger until his death in 1977. His son, Alma Sonne, Jr. wore it for the next 30 years and then sent it to Alan, Alma’s only grandchild who shared the AS initials. Alan feels humbled, he said, to be the one wearing it today.

To him, it is much more than an interesting artifact. “Rings are symbols of promise, vows, and gratitude,” he said, “so on my finger is a daily reminder of being a link in bonded generations of faithful ancestors and Saints.”

Alan has shared the story of the ring in church but has also showed it to work colleagues and others because it is connected to a story of general interest. In doing so, he has had opportunity to open the door to discussions about the Church and the principles that Alma honored—principles that he and his family try to follow today.

“I have no special quality that caused me to deserve this memento,” he said. “It also fills me with humility and gratitude to have something to remind me of the gospel, which has given me and my family all that is good and wonderful in our lives.”

“A Thousand Stories out There”

Although the story of her grandfather and the Titanic has fascinated Jackie Shelline, whose father was Alma Sonne, Jr., since childhood, she said that at this stage in her life, she’s coming to appreciate family history as more than stories that capture the imagination.

“I’m finding that I’m becoming more interested in having all of our family histories organized and accessible,” she said. “That’s key to later generations understanding what these people were like. I want future generations to remember Grandpa Sonne—not only theTitanic story but also other experiences he had. For instance, he was heavily involved with reconstruction in Germany and the revitalization of the Church in Europe following World War II. Those are the kinds of things all of us—descendants or not—can appreciate—that is, knowing what great work people did and how much their lives influence what we enjoy today.”

She also points out that such experiences need not be prominent in order to be powerful.

“Every single family has a connection to many stories—there are a thousand stories out there,” she said. “Some might be more famous than others, but there are many that are poignant in their own right. There’s something about being connected to a person by blood that makes the story especially powerful, and through studying family history, we can find great meaning in their stories for our lives.”