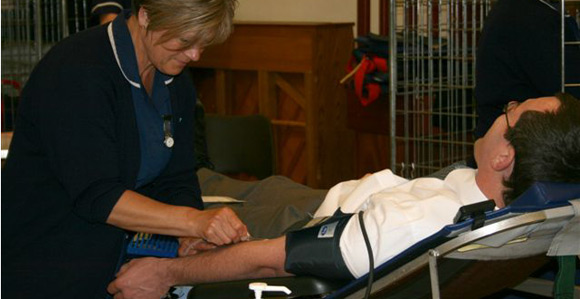 “When I think about it, it wasn’t just my life that was saved. When I recovered, my husband and I went on to have a fourth child. And now we have 10 grandchildren. What would we all have done without the gift of blood?”—Sandra Whitaker, a member of the Church in England who survived a car accident and received life-saving blood transfusions 33 years ago.

During April 2011’s general conference, President Henry B. Eyring, First Counselor in the First Presidency, extended an invitation to Church members worldwide to “lift the people they serve higher” by participating in a day of service.

Members in several countries participated in blood drives, most of which were organized under the Mormon Helping Hands umbrella, between President Eyring’s invitation in April and the end of the year. Latter-day Saints in Spain held a blood drive in June, while Italian members of the Church participated in a national day of service in November. Members in Switzerland held two blood drives, one in October and another in December. Portugal also held a blood drive in December, while the United Kingdom had ongoing drives at six Church meetinghouses throughout the year.

Portugal’s blood drives were set up in five central locations covering six stakes, while Church members living in smaller cities donated directly at local hospitals. Approximately 600 members and friends of the Church across Portugal participated, donating some 360 units of blood and 1,300 volunteer hours, which made the country’s day of service the biggest service activity ever organized by the Church in Portugal.

Spain’s national blood drive collected 2,206 units of blood, and the program was so successful that other countries across the Europe Area are using it as a model for their own drives.

Church members in Switzerland participated in blood drives across four different days and were able to collect 259 units of blood.

According to the Portuguese Institute of Blood, a governmental institution that partnered with the Church at the drives in the country, each unit of blood can save three people’s lives. Portugal’s blood drive saved 1,080 lives, and Church members plan to double the number next year.

In total, the drives held among Church members resulted in a collection of 18,975 units of blood, which saved some 56,925 lives.

Sandra Whitaker, a member of the Church in England, knows firsthand how meaningful the generosity of others in giving blood can be.

In December 1979, a car hit Sister Whitaker, then a 29-year-old mother with three young children, as she walked to a bus stop with them after church.

Her injuries were extensive. During an emergency surgery, which she was not expected to survive, she was given blood transfusions. She received priesthood blessings, and the members of her stake held a fast for her.

Now, more than 30 years later, Sister Whitaker is a mother of four and a grandmother of 10.

“There are a lot of individuals who are alive because of other people’s generous donation of blood—and I am one of them,” Sister Whitaker said “But when I think about it, it wasn’t just my life that was saved. When I recovered, my husband and I went on to have a fourth child. And now we have 10 grandchildren. What would we all have done without the gift of blood?”

Preaching the Gospel through Service Projects

Of course, the blood drives were just one of many ways that members of the Church around the world seek to improve their communities—to, as President Eyring said in April, “lift the people they serve higher.”

Brother Elvidge has seen the fruits of such efforts.

“It is so encouraging in the United Kingdom to see many stakes now fully embracing Mormon Helping Hands, which is aimed to provide community service and disaster relief to those in need,” he said. “It is a program that provides priesthood leaders with service opportunities for Church members and helps establish the name and reputation of the Church. It is a proven means of helping dispel stereotypes often held about the Church, showing that Latter-day Saints are Christians who contribute to the good of their communities.”