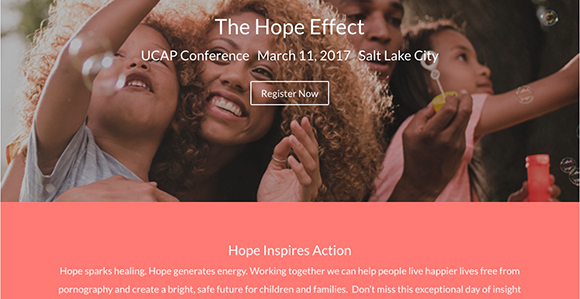 “A person’s rightful due is to be treated as an object of love, not as an object of use. We were made by love to love and for love.” —Matt Fradd, conference keynote speaker

Despite the negative consequences of pornography—addiction, marital breakdown, sexual violence—it’s crucial to see pornography as wrong in and of itself because of the way it objectifies human beings, said the keynote speaker at the Utah Coalition Against Pornography conference March 11.

“Whenever we subordinate the goodness of a human being to whatever end we’re trying to obtain, that’s not good,” said Matt Fradd, director of Youth and Young Adult Outreach of Integrity Restored. Pornography “is very much like this. It treats people as two-dimensional objects to be consumed, without recognizing them as persons to be cherished.”

Mr. Fradd called the human body precious and said it is due honor and reverence.

Some 2,800 people attended the day-long conference, titled “The Hope Effect” and held at the Salt Palace in downtown Salt Lake City. The largest of its kind in the nation, the conference is now in its 15th year.

Pamela Atkinson, chair for the Utah Coalition Against Pornography Board, said an important part of the organization’s mission is to inform, educate, and provide tools to help in preventing or recovering from pornography. “We all need to take responsibility to spread the word about the dangers of pornography and how dangerous it is and how it destroys relationships,” she said.

It is important to work together in this fight against pornography as we all learn from one another about successes as well as new ideas, research, and opinions, she said.