Elders Holland and Cook Reflect on Missionary Service Together in England 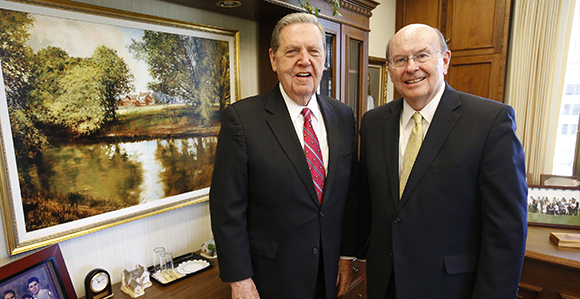 Elders Jeffrey R. Holland and Quentin L. Cook, members of the Quorum of the Twelve Apostles and former mission companions in England in the early 1960s, pose at the Church Administration Building in Salt Lake City on June 23, 2017.

In early 1961, two young LDS missionaries, one from St. George and one from Logan, first shook hands and became acquainted while touring Church history sites in England. They forged an immediate bond and later served together as companions. It was the beginning of a lifelong friendship.

Little did Elder Jeffrey R. Holland and Elder Quentin L. Cook know that several decades later they would reunite in full-time gospel service as members of the Quorum of the Twelve Apostles of The Church of Jesus Christ of Latter-day Saints.

“There is something that happens with missionary companions, and most of the time it’s remarkable,” Elder Cook said. “I am so grateful for the bond of love, appreciation, and gratitude for all these many years that we have been dear friends.”

“If it hadn’t been for the Quentin Cooks of the world (of whom there’s only one!), I don’t know that my mission would have been what it was,” Elder Holland said. “I had wonderful missionary companions, and I love them to this day.”

The two Apostles recently reflected on their missionary experiences while discussing the 180th anniversary of the Church opening missionary work in Great Britain. Seated side by side in an office of the Church Administration Building, the two senior Church leaders recalled memories that prompted moments of good-hearted laughter, friendly pats on the back, and genuine smiles of satisfaction. 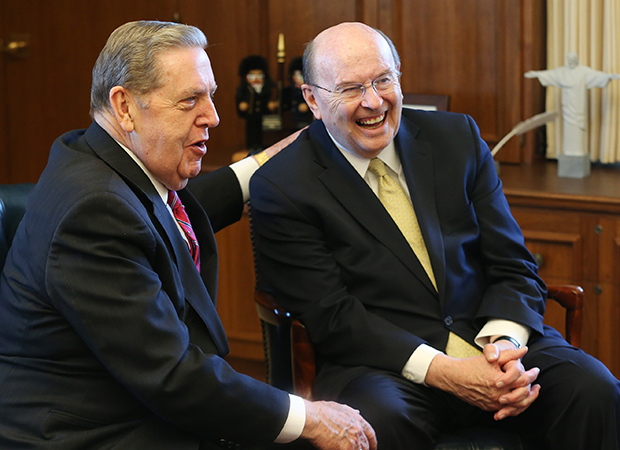 Elder Cook arrived in the mission field in September 1960. The LDS Church had just dropped the missionary age for young men to 19. The Cache Valley native was one of the last 20-year-old missionaries. Elder Holland arrived a few weeks later as one of the first 19-year-old missionaries. At that time, there were only two missions in all of the United Kingdom. When the two missionaries went home, there were seven missions, Elder Holland said.

Elder Cook and Elder Holland spent most of their missions in the greater London area and the south of England. Looking back, both Apostles remember visiting the London Temple, a mission home on Exhibition Road, holding baptismal services in the Hyde Park Chapel, and learning from their mission presidents, one of which was Elder Marion D. Hanks, who served as a General Authority Seventy and in the Presidency of the Seventy.

Their years of missionary service came about 15 years after the conclusion of World War II. With camaraderie that existed between former allies still fresh in peoples’ minds, the American missionaries were “fairly successful” in their work, Elder Cook said.

“Because of the war, a lot of them had lost their faith, but others had become quite introspective about their lives,” Elder Cook said. “I feel like we were blessed.”

Because London is a primary stop for traffic entering Europe, the mission often received visits from General Authorities. The missionaries didn’t always get to meet with them, but they knew when visitors like President Henry D. Moyle (then a member of the First Presidency), future Church Presidents Spencer W. Kimball and Gordon B. Hinckley, and Apostle Richard L. Evans were in London. 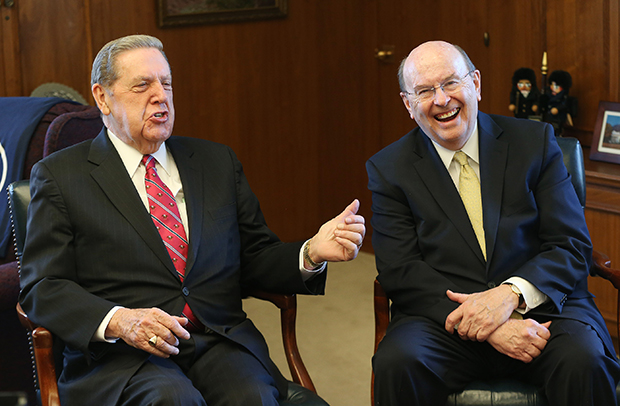 “I can still picture him getting out of the car on Exhibition Road,” Elder Holland said, “Then he presided over a wonderful dedicatory service in the chapel. Those were great missionary memories.”

Elder Cook missed President McKay in London but saw him when he visited his mother’s home in Wales on the same trip.

“He went into his mother’s tiny home, and when he came out he just wept and talked about his precious mother,” Elder Cook said. “I will never forget that.”

Later on, Elder Holland and Elder Cook served together in senior leadership positions and as a companionship. Elder Cook recalled one instance when the duo had a conversation with a woman who figured out they both had faithful, active mothers and less-active fathers.

“Have I got this straight? Neither of your fathers were active in the Church?” the woman asked.

“Yes, it’s true,” Elder Holland told her. “I was 13 years old before I realized that a white shirt didn’t come with a pack of cigarettes in it.”

Even then, Elder Cook knew his companion had an interesting way of saying things, he said.

During their time together, Elder Cook said he recognized in Elder Holland a “fabulous” talent for teaching the gospel, along with “enormous spiritual depth.”

“He was extremely good then, and there is nobody better in the Church at teaching,” Elder Cook said. “I have loved Elder Holland since those early days and sustain him as my senior now.”

Elder Holland deflected the praise back on Elder Cook, calling him “the best missionary of our generation.”

“There was no harder-working missionary ever. He was conscientious, no-nonsense, knew what he was there to do. … When he was on that mission, it was get up and go to work. As a result, he had tremendous success, even legendary success.”

Elder Holland recalled a time when Elder Cook received a new missionary on a rainy night. It would have been easy to let the travel-weary elder eat a meal and go to bed, but Elder Cook saw something special in the young man and took the bleary-eyed elder out to work. When asked about it later by President Hanks, Elder Cook said, “He wanted to start him off right and let him know how we do things over here,” Elder Holland said.

Companions like Elder Cook left a great impression on Elder Holland, who came to the mission field without a family missionary tradition, Elder Holland said.

“I didn’t know anything about a mission. … Elder Cook was more firmly established in the gospel, had a vision, and was a better missionary,” Elder Holland said. “I have gone all over the world since saying my mission changed my life forever, but it was because of really good missionaries like Quentin Cook who taught me what a mission was to be. And of course we all loved our mission president and his wife.”

Last October—more than 50 years after they were companions in England—the pair of Apostles teamed up for a trip to Jerusalem to commemorate the 175th anniversary of Elder Orson Hyde dedicating the land as a gathering place for the Jewish people. (See related story.) Working side by side again in that sacred place gave added meaning to their missionary and apostolic labors, they said.

“Over the years we have both used the word seminal to describe our missions,” Elder Cook said. “That’s about the only word that really describes what it is. It’s really that important.” 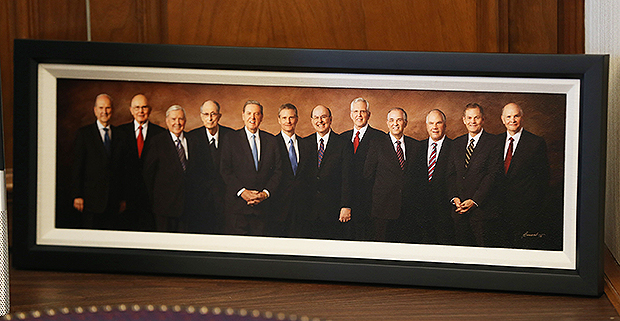 Photo of the current members of the Quorum of the Twelve Apostles that is displayed in the office of Elder Jeffrey R. Holland on June 23, 2017. Photo by Jeffrey D. Allred, Deseret News.