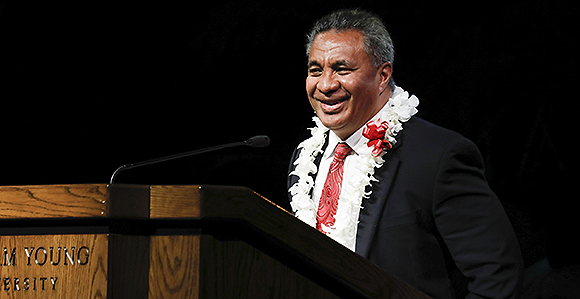 Elder Vai Sikahema speaks during the first campus devotional of the new year at BYU–Hawaii on Tuesday, January 14, 2020.

Latter-day Saints have a “religious obligation” to pursue an education and obtain knowledge, said Elder Vai Sikahema during the first BYU–Hawaii campus devotional of the new year and semester. But pursuing an education is not always easy or affordable for everyone.

Although the Church now provides BYU–Pathway Worldwide, IWORK, the Perpetual Education Fund, and a number of other programs to help young Latter-day Saints in their educational pursuits, Elder Sikahema expressed a desire to help future students who share a similar background to him and his family.

During the devotional on Tuesday, January 14, Elder Sikahema, an Area Seventy for the Church and a former NFL player who has a long-established career in journalism, announced he is in the process of establishing two new scholarships for students at BYU–Hawaii. The scholarships, he explained, will be named in honor of his mother and his mother-in-law—the Ruby Sikahema and Dorothy Heder scholarships—and, once funded, will in perpetuity pay tuition for worthy students from Tonga and Hawaii.

Some 50 years ago, after moving to Hawaii to pursue a teaching certificate at BYU–Hawaii, Ruby Sikahema encountered a dilemma that changed the course of her life, Elder Sikahema explained. The dilemma she faced was choosing between her children and her education. And although he is grateful for his mother’s decision to choose her three young children, he regrets that it came at the cost of giving up her dream of attaining a teaching certificate from the university.

“I hope none of you ever have to face the dilemma of choosing an education or your children,” Elder Sikahema said, acknowledging the difficult circumstances many students from varying countries may experience as they sacrifice to attend the Church-owned university.

“I am keenly aware that some of you are here under similar circumstances,” he said. “I know there are many enrolled this semester whose families are living in poverty back home in Vava‘u or Ha‘apai, Samoa, Fiji, Vanuatu, Cook Islands, Guam, Philippines, Cambodia, Thailand, or perhaps Vietnam. Maybe you came here alone, or perhaps you’re newly married with young kids. Maybe you had to leave your children back home with family while you came to pursue your education.”

Such was the case for his mother and father when they first moved to Hawaii from Tonga in 1969. Ruby and Loni Sikahema moved to Laie for Ruby to pursue her degree with a scholarship she had earned from the Church-owned Liahona High School in Tongatapu, Elder Sikahema explained. With only enough money for a one-way ticket each, his parents left their three small children behind in Tonga in the care of their grandparents.

“They naively assumed it would take only a few months to earn enough to send for all three of us,” he said. And even though they both worked and saved all of their spare change, his parents had little more than enough to cover their basic needs in Hawaii.

As Elder Sikahema explained, although his mother’s dream was to get her degree and return to Tonga and teach at the Liahona High School, his father had other ideas that he believed would give their children greater opportunities in life.

“[My father] wanted to stay in the States and pursue the American Dream,” Elder Sikahema said. “He prevailed on my mother to drop out of school, apply for resident alien cards, otherwise known as ‘green cards,’ immigrate to the mainland, and work to bring my younger siblings from Tonga.”

With their limited means, the young couple moved to Arizona—where they had family—and began working full-time to bring their children to live with them while applying for permanent U.S. residency. It took a couple of years, Elder Sikahema said, but it happened.

“Our piecemeal immigration took 3.5 years for us to be reunited as a family,” he said. And without college degrees, his parents relegated themselves to working menial jobs for the rest of their lives as they supported their children and encouraged them to pursue educations of their own. In retrospect, Elder Sikahema continued, there were probably ways his parents could have accomplished bringing their family together while not sacrificing their educations, but at the time, they just didn’t know how.

“Though she never regretted her decision, my angel mother was nevertheless haunted by the fact she was so close to a university degree, yet it was just out of reach,” he said. “So, since a college degree wasn’t in the cards, Mom would make it her life mission to provide her children with the tools to be educated, with very limited resources. She didn’t have any savings, but she paid her tithing faithfully, and she attended the temple weekly, and she pleaded with the Lord to help her find a way, and the Lord blessed her and us in miraculous ways.” 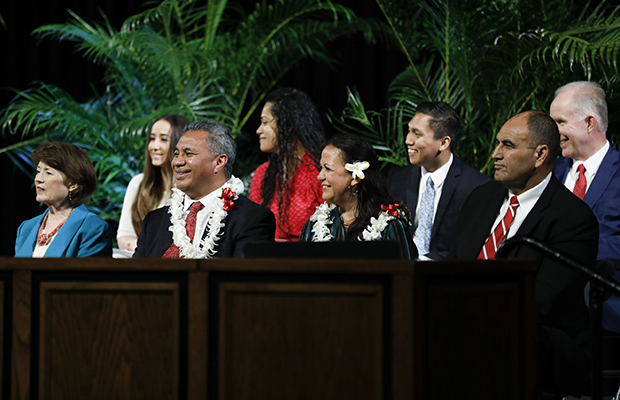 Elder Vai Sikahema sits on the stand during the first campus devotional of the new year at BYU–Hawaii on Tuesday, January 14, 2020. Photo by Monique Saenz, BYU–Hawaii.

Among the miraculous blessings brought about by his mother’s prayers were three individuals who helped change Elder Sikahema’s life for the better, he said.

Barbara Nielsen was one such blessing.

Although Vai Sikahema was a star athlete on the football team in high school and was approached regularly by college recruiters looking to sponsor him with full-ride scholarships, getting grades and test scores good enough to attend top-tier universities was a major concern, Elder Sikahema explained, noting he was a solid C and D student.

Not knowing how to help her son, his mother did the one thing she knew—she turned to the Lord for help.

“Because my angel mother didn’t know how to navigate the American college system, she prayed, and the Lord sent her Barbara Nielsen,” Elder Sikahema said. “I mean, what are the chances that my huge public high school’s best English teacher and faculty adviser of the school newspaper would be in my ward? I believe Ruby Sikahema’s prayers made it so.”

While Vai Sikahema was still a teen, his father, Loni Sikahema, drifted into inactivity in the Church for a time. During that period, two individuals, Ned Brimely and Marty Klein, both of whom were members in the same ward as the Sikahemas, became big influences in Vai Sikahema’s life. Both men taught him important lessons that would help guide him in his life and in his dedication to Church callings, he explained.

“I was an adult before I fully appreciated how many incredible teachers were in my ward,” he said. “We had meager resources, and yet my mother’s faith opened the windows of heaven.”

He continued, “My parents couldn’t afford private schools or even private tutoring. Yet Barbara Nielsen, Ned Brimley, Marty Klein, and a host of others answered my mother’s prayers that her children would be educated.”

And the extraordinary thing is that all of them have become well educated, Elder Sikahema said.

His younger siblings Lynette and Kap both have college degrees and have even gone on to achieve postgraduate degrees as well, he said. Additionally, all of his parents’ grandchildren also either have graduated from college or are currently in the process.

And although his mother passed away seven years ago, he shared his hope that the scholarships in his mother’s and mother-in-law’s names will please them and honor the legacies they left behind.

As Keala Sikahema—Elder Sikahema’s wife, who introduced him at the devotional—explained, their mothers, Ruby Sikahema and Dorothy Heder, were old friends who had known each other during the time the Sikahemas lived in Hawaii some 50 years ago. “They had a sweet relationship,” Keala Sikahema said. “So it is fitting their legacies will benefit the future education of others who share their heritage and history.” 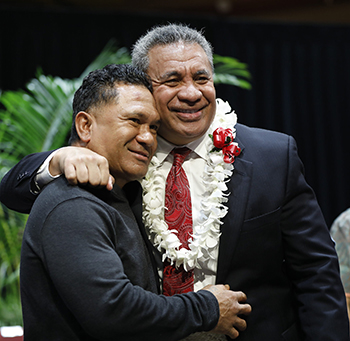 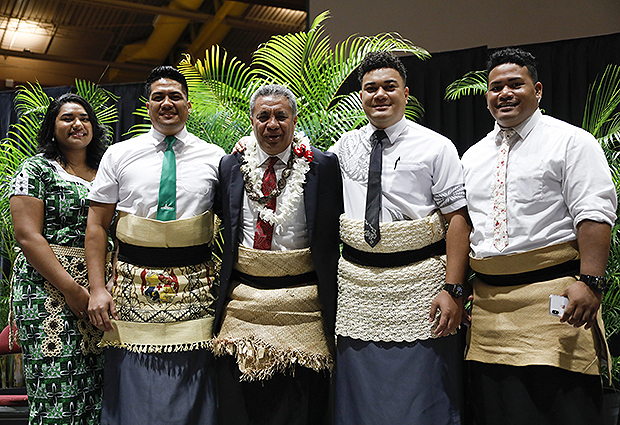 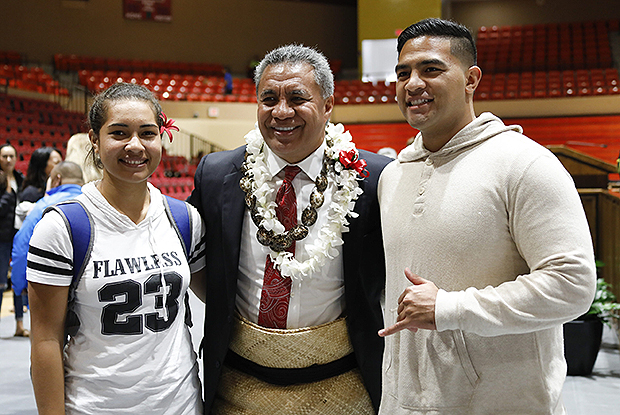 Elder Vai Sikahema, center, poses for a photo with attendees at a special luncheon following a campus devotional at BYU–Hawaii on Tuesday, January 14, 2020. Photo by Monique Saenz, BYU–Hawaii.