“No matter how crippled we feel, no matter how broken, no matter how alone, please know this: you are known and loved by your Heavenly Father. He cherishes you as His child. You are not forgotten.” —Elder Dieter F. Uchtdorf

People sometimes ask Elder Dieter F. Uchtdorf if he ever tired of traveling during his career as an airline captain.

He never did. The former Lufthansa pilot “loved visiting different areas” and learning about the cultures and histories of each country he visited. Each of his sojourns enriched his life—especially when he made new friends and met new people.

As a member of the Quorum of the Twelve Apostles, “I love traveling even more,” said Elder Uchtdorf during a Sunday, February 16, member meeting that was broadcast across Chile.

The country-wide gathering marked the conclusion of 10 days of travel in two South American nations—Uruguay and Chile—for the well-traveled Church leader and his wife, Sister Harriet Uchtdorf.

Their time in South America was defined by the sort of highlights Elder Uchtdorf came to love as a pilot flying to all corners of the globe: They made new friends. They worshipped alongside fellow Latter-day Saints. They taught others about the restored gospel. And, finally, they returned home with their own spirits soaring and uplifted.

Both Elder and Sister Uchtdorf shared messages of friendship and hope during Sunday’s Chilean broadcast.

Elder Uchtdorf called the Chilean Latter-day Saints an “inspiration” and “a joy.”

“Your faithfulness to sacred covenants and to the ordinances of the gospel of Jesus Christ has an influence on the growth of the worldwide Church,” he said. “It brings strength to your local communities and is a great blessing to your families and to individual lives.

“I count it a great joy to be with you in the wonderful country of Chile.”

God Watches Over You

Elder Uchtdorf anchored his message Sunday to a Biblical verse from King Solomon: “Trust in the Lord with all thine heart; and lean not unto thine own understanding. In all thy ways acknowledge him, and he shall direct thy paths” (Proverbs 3:5-6).

A person’s outlook on life changes by choosing to follow the king’s wise, timeless counsel.

“Of course, this does not mean that disciples of Jesus Christ will be free from suffering, heartache, or disappointment,” he said. “Unfortunately, if we live long enough, we all must drink from the bitter cup of disappointment, loneliness, and grief.

“Nevertheless, while moments of heartache are inevitable, even in the midst of those difficult times, God watches over you.” 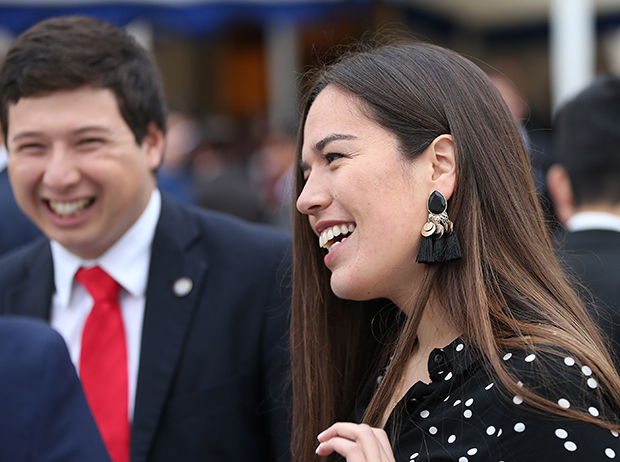 Daniella Figueroa laughs with friends during the dedication of the Concepción Chile Temple in Concepción, Chile, on Sunday, October 28, 2018. Photo by Jeffrey D. Allred, Deseret News.

The Apostle shared the New Testament account of David, the boy shepherd who would become a great king.

The prophet Samuel was guided by the Lord to anoint young David to one day become the king of Israel. Then David returned to his fields and tended his family’s sheep. Years passed, and the prophesied king continued with his humble shepherding duties and practicing his harp.

But the Lord, said Elder Uchtdorf, had not forgotten David.

When King Saul needed a talented musician, he chose David. When the Philistine giant Goliath challenged Israel, he was defeated by David.

And when a jealous King Saul sought to kill his young subject, David fled into the wilderness.

But even in his most difficult days, David never doubted the Lord. He trusted Him.

And, of course, the prophesied day eventually arrived when David became king of Israel.

“One of the reasons why David was so successful as a king,” taught Elder Uchtdorf, “is that he included the relationship with God into the very life of the people.”

The story of David is thousands of years old—but its lessons remain as relevant as ever.

“But what we fail to understand is that we are sons and daughters of royalty. We are children of Almighty God.”

God’s love for His children is infinite—and He does not forget them. He demonstrated His “boundless love” by sending His only Begotten Son into the world to save His children.

And that, declared Elder Uchtdorf, is the gospel’s joyful news.

“Because of His infinite Atonement, our limitations, weaknesses, and inadequacies are cast aside. Our sins can be washed away and remembered no more.

“No matter how crippled we feel, no matter how broken, no matter how alone, please know this: you are known and loved by your Heavenly Father. He cherishes you as His child. You are not forgotten.” 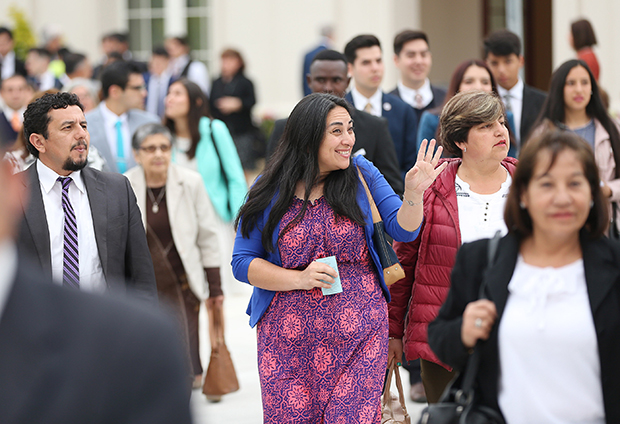 Elder Uchtdorf then shared the account of a Chilean family who, almost a half century ago, learned about the Church and invited the missionaries to their home. They accepted the restored gospel and happily joined the Church.

But it was a difficult time for many in Chile, defined by political turmoil.

Around that same time in Chile, a missionary and his companion received permission to visit inmates at a prison. Many were likely political detainees. There they spoke to over 100 prisoners and testified of Christ. They told them God knew them and loved them.

The missionary and his companion then shook the inmates’ hands and departed. He could not have imagined much good would come from their visit.

But one of the inmates was touched by the missionaries’ visit and their Christ-centered message. He decided that if he ever left prison alive, he would find out more about the church they represented.

Later, he indeed found the Church, was baptized, and accepted his own full-time mission call. When the former inmate returned from his mission, he met a fellow convert. They fell in love and married.

Years later, the couple was discussing their unique conversion stories. The young wife pulled out a photograph of the missionary who had taught her family.

“Her husband could not believe it,” said Elder Uchtdorf. “The image on the photograph was the same missionary who had come to the prison and spoken to the inmates.”

The couple would become “a pillar of the Church” in Chile, blessing many lives.

The missionary would only learn of his shared connection with the couple decades later.

“For him, it was an example of our Heavenly Father reaching out to two of His beloved children to bring about His own purposes.”

The Lord cared enough about the husband and wife to bring them together in a way that neither could have anticipated. They mattered to Him. 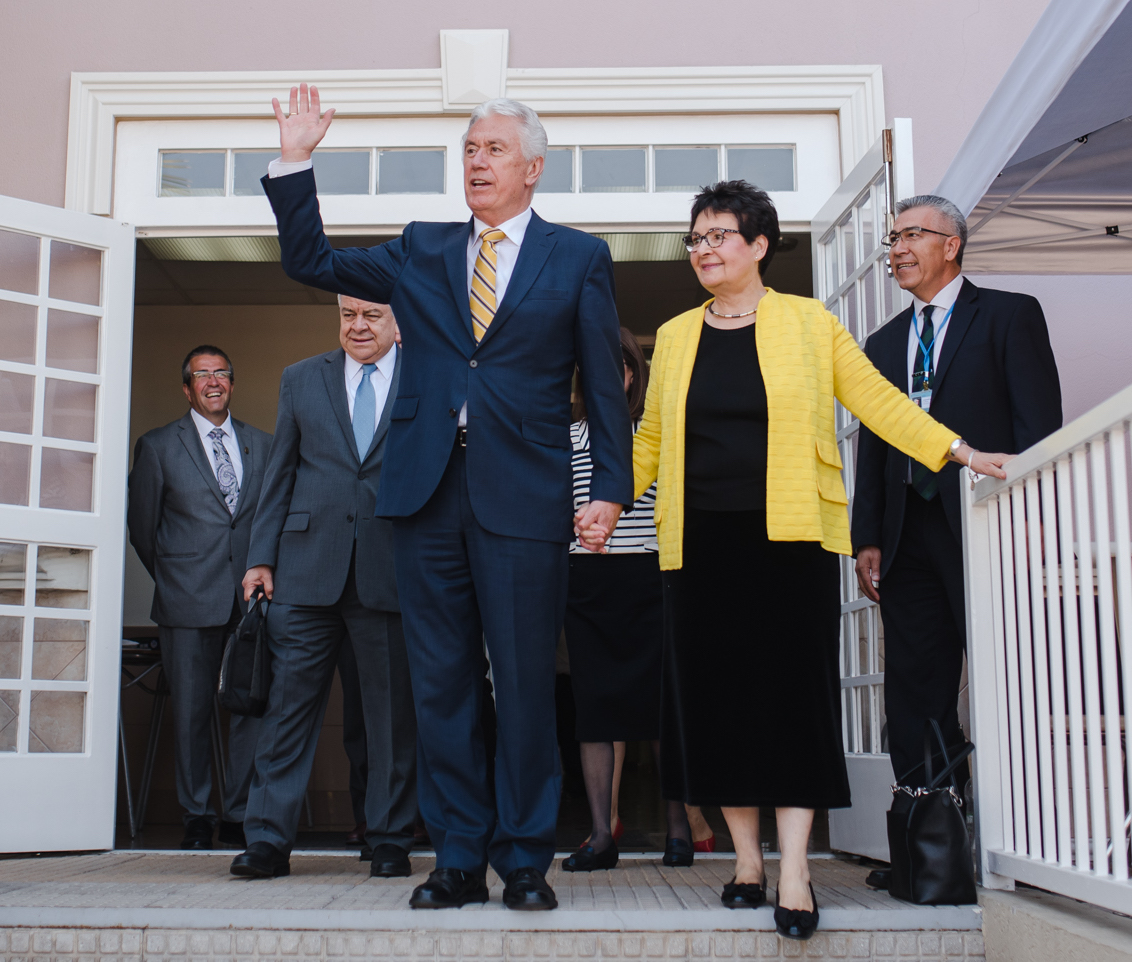 Never Be Ashamed of Being a Latter-day Saint

Perhaps, said Elder Uchtdorf, some in Sunday’s audience feel they are different from David or the Chilean couple. They may feel God has forgotten them.

“My beloved friends, my witness to you is that you are infinitely important. God does know you.

“He loves you. He yearns to bless and guide you, to lift you from where you are and place you upon thrones of glory. For you are His child. You are royalty. You are not forgotten.” 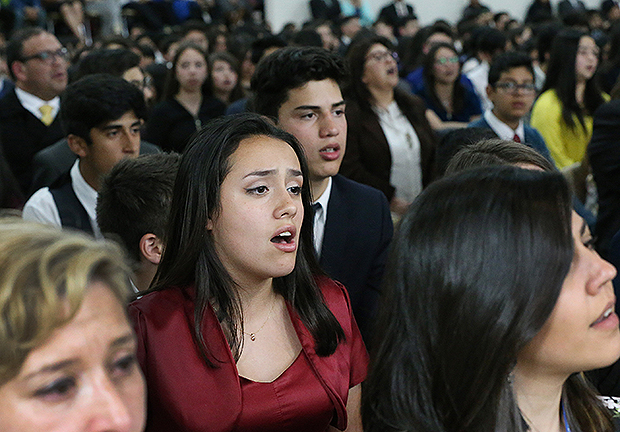 With trademark warmth, Sister Harriet Uchtdorf called it a joy to be “with you amazing and beautiful people of Chile.”

Like her husband, Sister Uchtdorf is a seasoned traveler. But wherever she meets with Latter-day Saints, she feels she is home.

“And being with you today,” she said, “feels like a huge family reunion.”

Sister Uchtdorf acknowledged that many gathered Sunday were experiencing difficulties. Demonstrations and civil unrest have staggered much of the nation in recent months.

But Heavenly Father and His Son Jesus Christ will never abandon Their Chilean people, she promised.

“Focus on living the gospel and being true to your covenants. This will lead you out of any challenging circumstances in a very special way.”

Sister Uchtdorf said she learned early in her life that one of the keys to happiness was embracing God’s teachings and following Christ’s example.

When she was a little girl growing up in Germany, young Harriet Reich’s kind and talented father became very sick with cancer. For two years he suffered. He was in great pain, leaving his daughter feeling helpless.

“And when my father finally passed away, my mother, my sister, and I felt consumed by a terrible and overwhelming sadness. My mother fell into a deep depression. She could not find comfort.”

Harriet’s small, heartbroken family wondered if they would ever know another day of happiness.

Then one day an unexpected knock came at the door of their apartment. Two young Latter-day Saint missionaries greeted them, saying they had an important message they wanted to share.

The missionaries taught Harriet and her mother and sister about the plan of salvation. Their message marked a miracle for the grieving family. 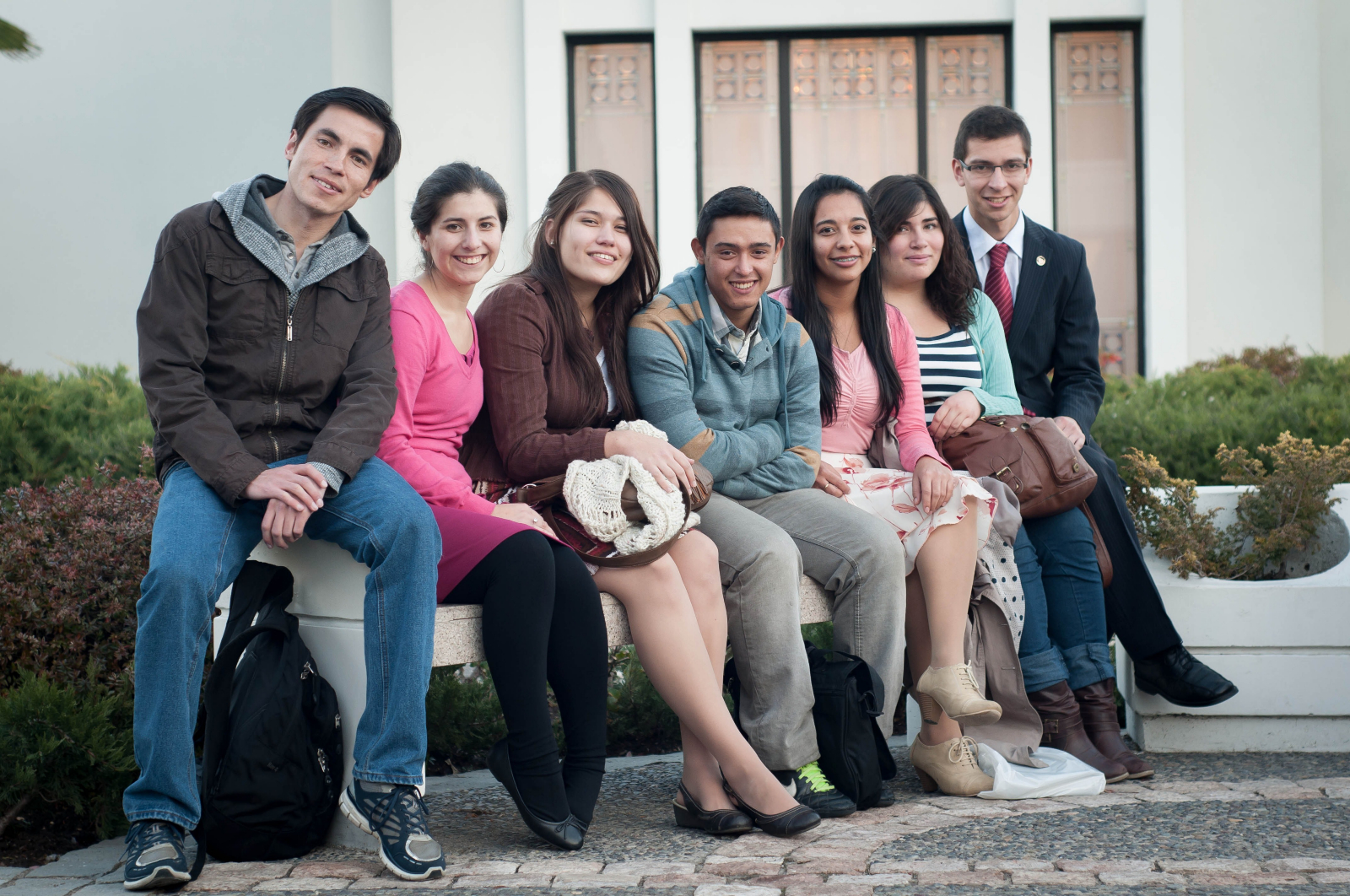 Youth from Chile participate in an Especially for Youth session. Photo courtesy of Deseret News Archives.

Our eyes and hearts were opened to truths we had never known,” she said. “And yet everything they said sounded so familiar—as though we had known and believed them all along. We learned about the purpose of life, where we came from, why we were here, and what will happen after we depart from this existence.”

And death, she learned, did not signal an end to families. She would see her father again.

“The darkness in our home gave way to a sublime and joyous light. We felt the healing presence of the Spirit. It was as if angels had been sent to us. The two missionaries who came to our door seemed to be angels indeed—angels who brought us a cherished and priceless gift—the message of the master teacher, the restored gospel of Jesus Christ.”

The Reich family accepted the gospel and were all baptized. They soon found new friends in their Latter-day Saint family.

Decades have passed, and the Uchtdorfs have sent their own children and grandchildren on missions. They have worked hard, knowing perhaps that behind the next door they knock on is another family suffering and needing hope.

“I look back on that young girl who stood at the window praying for her father many years ago,” she said. “How I would love to go back, put my arms around her, and tell her that her Heavenly Father had not forgotten her, that He knows her, that He loves her, and that all would be all right.

“I would tell her that hope is not lost. And though the future may look frightening and dark, it is filled with light and glory.” 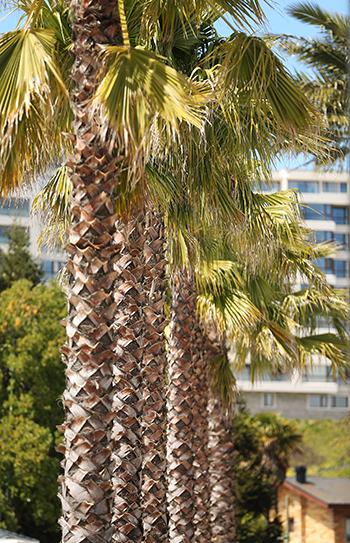 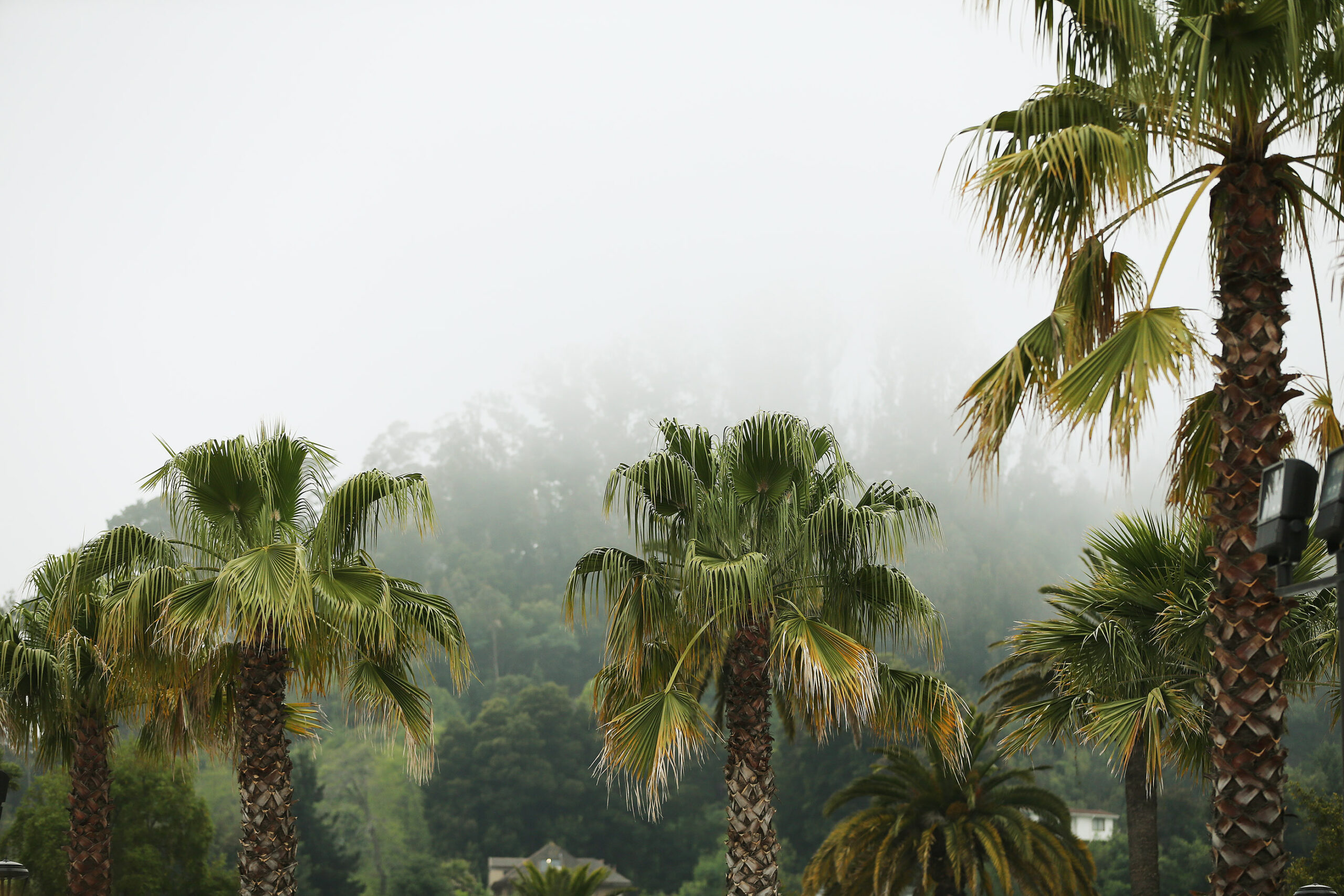