“Imagine that—the most powerful being in the universe—the being who formed stars, nebulae, and galaxies has your eternal happiness as His greatest priority.” —Elder Dieter F. Uchtdorf

Happiness is what the great philosopher Aristotle said individuals seek for above everything else. And 2,400 years later, the pursuit of happiness is still happening today.

“But how successful are we in finding it?” Elder Dieter F. Uchtdorf of the Quorum of the Twelve Apostles asked young adults during a multiregional devotional in Palo Alto, California, on October 27.

Despite the advancements of living conditions, transportation, health care, technology, and entertainment since Aristotle’s time, new studies are released every year about the unhappiness and despair of the modern day.

“Too often, people today confuse happiness with experiencing pleasure. We post Potemkin Village images of our lives on social media offering carefree impressions of an idyllic existence of never-ending sunshine, laughter, and euphoric bliss,” said Elder Uchtdorf, referencing his talk about being genuine from the April 2015 general conference (see “On Being Genuine” Ensign or Liahona, May 2015, 80–83).

Thousands of young adults gathered on October 27 in the Stanford Memorial Church for the meeting, sponsored by the Latter-day Saint Student Association at Stanford University. In 1981, Elder Uchtdorf served on a presidential task force that took him to the area. “It was nice to come back in a different way and to be in the historic Stanford Memorial Church, with its beautiful architecture and golden mosaic that shines in the evening light,” he said.

In addition to Elder Uchtdorf, Margaret Ivory and Alejandra Aldridge, both of the Latter-day Saint Student Association, spoke.

During the devotional, Elder Uchtdorf spoke of discovering the true happiness that comes by walking the path of discipleship and sharing experiences as followers of Jesus Christ.

Contrary to the counterfeit happiness found on social media today, Aristotle described happiness by using the term eudaemonia, which means “human flourishing.” This definition implies that happiness comes from “daily striving to become the best version of ourselves” rather than moments of pleasure, he said.

Heavenly Father has also offered wisdom on how to find joy. He cares about the happiness of each of His children. Why? “Because you are His child. He knows you. He hears you. He wants you to succeed. He wants you to know what it means to fill your soul with the incomprehensible light of eternal glory.

“If you truly understand and internalize this, you will never be the same,” Elder Uchtdorf said.

He quoted God’s “mission statement” found in Moses 1:39 about His work and glory to bring about the immortality and eternal life of His sons and daughters.

“Imagine that: the most powerful being in the universe—the being who formed stars, nebulae, and galaxies—has your eternal happiness as His greatest priority,” said Elder Uchtdorf.

To help bring His children safely home, Heavenly Father has prepared a plan of happiness—a plan based on agency that allows His children to reach their potential as “beings of light and glory.”

Part of this plan includes making mistakes and learning from them. “We don’t want to make mistakes. But when we do, because of our Savior’s eternal sacrifice, we can be forgiven and given a fresh start again,” he said.

“But that is not all,” Elder Uchtdorf said.

The Savior’s commandment to “Go ye therefore, and teach all nations” (Matthew 28:19) was not intended for His original Apostles only. “The Great Commission of Jesus Christ applies to us in our day,” he said.

Coming to know Heavenly Father and understanding the Atonement of Jesus Christ will bring a greater desire to share the gospel.

While talking about the Church may be easy for some, Elder Uchtdorf said to those who may struggle: “All is not lost. [They] can still play a necessary and critical role in fulfilling the Great Commission of Jesus Christ” by using everyday conversation to talk about what is happening in their lives as members of the Church.

Some acquaintances will want to learn more, and others will not. “That is between them and God,” Elder Uchtdorf said.

“Allow your Heavenly Father to work His miracles. He can take a simple post on social media or a brief comment to a friend and transform it into a light that burns within someone else’s soul.”

Ministering to and lifting others counts as success, not just when someone joins the Church. Success comes through simple acts of goodness and friendship.

Elder Uchtdorf also emphasized the power of three invitations: “come and see,” “come and help,” and “come and stay.” The gospel of Jesus Christ is the world’s greatest hope for a better, more peaceful world—a world where people incline their hearts to God and serve their neighbor.

“As disciples of our Lord and Savior, Jesus Christ, you are needed to play your part in transforming this dream into reality. You are God’s agents, His representatives to all with whom you come in contact. You are examples of the joy and fulfillment the gospel brings.

“Your charge is to first make these changes within your own hearts and then be an example and a servant to others as you help them do the same,” he said.

Follow the guidance found in For the Strength of Youth. Make the decision to always hold a current temple recommend. Internalize the principles in Come, Follow Me by using it as a daily guide. Pray to Heavenly Father every day, and trust Him.

“Do these things every day and you will see exciting, practical, spiritual, and emotional fruits in your life,” he said.

God will use every effort to share the gospel to work His miracles. “With every act of kindness, every word of testimony, every prayer you offer, this world becomes a better, purer, and more peaceful place.”

Elder Uchtdorf closed his devotional address by extending an apostolic blessing and urging young adults to allow the Spirit to work in their hearts and to share that light with others. “As you do so, you will be on the path to discovering true meaning, peace, and happiness in this great adventure and in the life to come.” 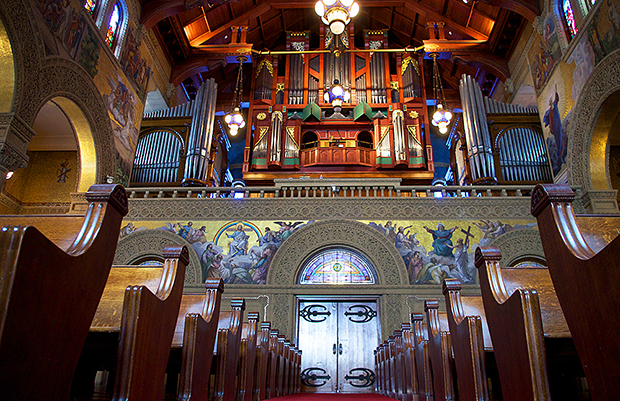 Inside the Stanford Memorial Church on October 27, 2019. 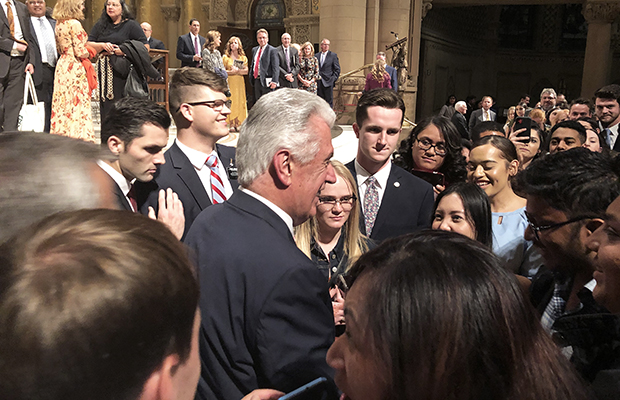