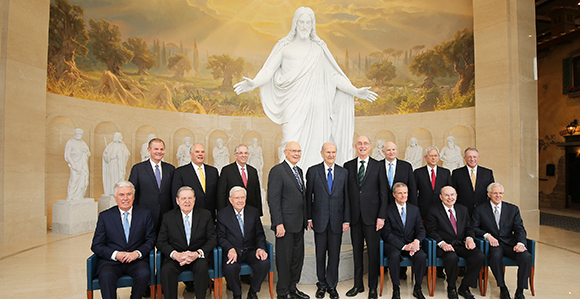 The First Presidency and the Quorum of the Twelve Apostles gather for a photo in front of the Christus statue and statues of the original Apostles in the Rome Italy Temple Visitors’ Center on March 11, 2019. Photo by Jeffrey D. Allred, Deseret News.

“Once we have crossed the line of doubt and come to know that the doctrinal teachings of the Church are true, . . . we can accept them as the will of God and move forward in a positive, constructive way.” —Elder Tad R. Callister

While serving on assignment in the Pacific, a mission president contacted me about meeting with a missionary who wanted to go home early. Evidently, the missionary had read some anti-Church literature and felt he no longer had a sufficient testimony to teach the gospel. I met with the missionary and asked if I might ask him a few questions. He consented. The questioning went essentially as follows:

In all, about 10 to 12 questions were discussed. I then asked this fine young missionary, “Can you think of any church that teaches one, let alone all, of these doctrinal principles?”

I will never forget his response: “I hadn’t thought of that before.”

In truth, this Church ruins any other church for its members, because, like this missionary, they know too much. If people leave this Church, they will usually end up traveling down one of two paths—either they will become a church unto themselves (because they will never find another church that has more truth than they already have), or they will head down the road of agnosticism. Recognizing this, I asked the missionary, “Are you willing to give up all this doctrine you know to be true, to throw it all away, because you have a few questions you can’t answer.”

It reminds one of the observation, “Don’t lose faith in the many things you know because of a few things you don’t know.”

Someone can’t very well embrace the doctrine of the Church on one hand and then reject the prophets and scriptures through which it came on the other any more than someone can claim that good fruit comes from a bad tree. If the fruit is good, the Savior taught, the tree is good. Accordingly, if the doctrine is true, then the prophets through whom it came are true.

Once we have crossed the line of doubt and come to know that the doctrinal teachings of the Church are true, then we don’t have to agonize over and dissect every statement of the prophets. We don’t have to weigh them against our finite standards of justice or our limited understanding of eternity—instead we can accept them as the will of God and move forward in a positive, constructive way. The profound doctrinal teachings of the Church are a powerful witness that our prophets are inspired and, thus, we can trust their counsel.