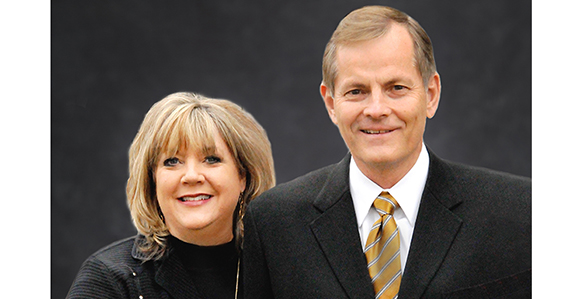 Sister Lesa Jean Higley Stevenson and Elder Gary E. Stevenson, who was sustained as a member of the Quorum of the Twelve Apostles on October 3, 2015.

“I sincerely pray that the natural fruit of my divine call as a special witness of Jesus Christ, in word and in deed, will lead me to a fuller measure of caring for the poor and needy.” —Elder Gary E. Stevenson of the Quorum of the Twelve

Walking through what was once a thriving coastal community in Higashi Matsushima, Japan, in the summer of 2011, Elder Gary E. Stevenson examined individual items—a cup, a pot, a blanket—in a massive pile of rubble.

The individual pieces of the rubble were somber remnants of the homes that once dominated the desolate landscape and the people who lived in them; each item told an individual story. They were stories of devastation and of resilience.

Elder Stevenson, then of the Seventy and President of the Church’s Asia North Area, had visited the disaster zone many times before, doing his best to relieve some of the suffering caused by the March 11, 2011, earthquake and tsunami that changed the landscape of northern Japan.

“The emotions you find here as we go about meeting people are from one end of the spectrum to the other,” said Elder Stevenson. “At once you are feeling emotions of hope and restoration, yet at the same time they are mixed with emotions of tragedy and loss.”

The disaster in Japan—a 9.0-magnitude earthquake and powerful tsunami that left more than 20,000 people dead, displaced thousands, and destroyed more than 551,000 homes throughout Japan—became a powerful and visual classroom for Elder Stevenson.

A year after the earthquake struck Japan, Elder Stevenson would take the lessons he had learned during the Japanese catastrophe and apply them as he served as Presiding Bishop—overseeing the Church’s humanitarian efforts across the globe.

Now, as a new member of the Quorum of the Twelve Apostles, he will apply those lessons again.

Elder Stevenson said the memories of the earthquake and tsunami in Japan are overshadowed only by the Church’s welfare principles.

“I bear a living testimony of all that we so easily call welfare,” he said, noting that as the Church stepped forward after the disaster, it was like a “healing balm applied by the Lord” descended as dew on those impacted.

As Presiding Bishop, he managed a broad network that delivered both welfare assistance and emergency response to Heavenly Father’s children throughout the world.

As a member of the Quorum of the Twelve Apostles, he will take on a greater ecclesiastical role yet fulfill “a responsibility that is very similar in caring for the poor and needy,” Elder Stevenson said. “There is a scriptural charge that says that we succor the weak, we lift up the hands that hang down, and we strengthen the feeble knees” (see D&C 81:5).

Elder Stevenson said his calling as an Apostle is humbling and has prompted his focus “on not what I can’t do but on what I can do.”

“I can be a special witness of Jesus Christ,” he said. “One of the divinely appointed responsibilities of the Church, as identified by the First Presidency, is caring for the poor and needy. Although we often think of this in terms of temporal needs, its application is equally important in ministering to the spiritual needs as well. This is ‘pure religion.’ I sincerely pray that the natural fruit of my divine call as a special witness of Jesus Christ, in word and in deed, will lead me to a fuller measure of caring for the poor and needy.”

Elder Stevenson was born August 6, 1955, in Cache Valley, Utah, to Evan Noel and Jean Hall Stevenson. After returning from full-time service in the Japan Fukuoka Mission, he met Lesa Jean Higley, an Idaho native, at Utah State University. The couple married August 20, 1979, in the Idaho Falls Idaho Temple and raised four sons in northern Utah, the same area where Elder Stevenson grew up.

Elder Stevenson was cofounder and president of Icon Health & Fitness, Inc.—a business in the health and fitness industry that would take him to the corners of the world.

“Interestingly, ours is a multicultural family in many ways, as we raised our children in both the USA and Asia,” said Sister Stevenson. “Elder Stevenson and I, and our children’s families, have learned from and grown to love members, friends, and associates from diverse cultures, nationalities, and ethnicities around the world.”

She too has learned valuable lessons from Church members and friends she has met across the globe.

“One can read daily news reports and become deeply discouraged with the state of humanity and its treatment one to another, and then when thrown into a situation, like the disaster in Japan, observe the outreach, compassionate service, and love demonstrated in the midst of human tragedy,” Sister Stevenson said. “This was truly heartwarming. We observed Christlike service everywhere. This is the good Samaritan in all of us.”

During one of his visits to the disaster zone in Japan in the summer of 2011, Elder Stevenson reflected on all the Church had done to help since the disaster. In addition to sending water, food, blankets, and fuel to refugee centers in the weeks after the disaster, the Church undertook efforts that helped the community rebuild. The Church sponsored numerous education, employment, and agriculture initiatives.

But, Elder Stevenson said, perhaps the greatest Latter-day Saint relief in the area came with the thousands of volunteers who donned Mormon Helping Hands T-shirts and gave hundreds of thousands of hours of service.

It was a phenomenon he would see again and again during his service as a General Authority and as Presiding Bishop. This interaction with members around the world—coupled with the mentoring and training from other Church leaders—prepared Elder Stevenson for his call to the apostleship.

“As a Seventy and as the Presiding Bishop, my interface with the First Presidency and the Twelve in my various assignments at Church headquarters and around the world was both a great blessing and important training,” he said. “Beginning with President Monson, I observed in each of them an abiding love and concern for individual members and families throughout the world. Their humble approach as servants of the Lord and of the people truly framed up for me the definition of Christlike service.”