In giving the final keynote address at the annual BYU Women’s Conference Friday, May 5, Elder Gary E. Stevenson encouraged listeners to utilize the “new and exciting channels of technology” to share “knowledge of the Savior.”

To illustrate the “idealized reality and debilitating comparisons” resulting from social media, Elder Gary E. Stevenson shared the story behind one of his family photos.

To someone seeing it for the first time, his family may look like “a family of four lovely, well-behaved boys, color coordinated, enjoying a harmonious family photo opportunity together.”

However, what that person doesn’t realize is that the Stevensons turned around their 2-year-old’s white turtleneck to hide a bloodstain resulting from a bloodied nose, they placed their oldest son’s arm to strategically cover a grass stain on his knee, they waited 20 minutes so their third son’s eyes were no longer red from crying, and they arranged their second son’s hands to cover his white athletic socks because he failed to wear his “scratchy” dress socks.

“So when you see this beautiful picture—of our family, anyway—and lament, ‘Why can’t I get things together and be a picture-perfect family like theirs?’ You all know better!” Elder Stevenson told women gathered in the Marriott Center for BYU Women’s Conference.

“The world usually is just not as bright as it appears on social media. Nevertheless, there is much good that has, and will, come through these new communication platforms,” Elder Stevenson said.

In giving the final keynote address at the annual conference Friday, May 5, Elder Stevenson encouraged listeners to utilize the “new and exciting channels of technology” to share “the knowledge of a Savior.”

“May each of you have the courage to blog, pin, like, share, post, friend, tweet, snap, and swipe up in a way that will glorify, honor, and respect the will of our loving Heavenly Father and bring a knowledge of a Savior to your family, loved ones, and friends,” he said.

As a member of the Quorum of the Twelve Apostles called as a special witness of the name of Christ in all the world, Elder Stevenson said he is able to focus on the fulfillment of the prophecy given by the Book of Mormon prophet King Benjamin—“that ‘the knowledge of a Savior’ is spread throughout the world”—using the latest technology available.

“The opening of the dispensation of the fulness of times in 1820 brought an enlightenment upon all mankind and a waterfall of technological advancements,” Elder Stevenson said. “It brought with it the industrial age and communication tools allowing the prophecy of King Benjamin to be fulfilled.”

He quoted Church President David O. McKay, who said that “scientific discoveries that ‘stagger the imagination’ would make possible the preaching of the gospel to every kindred, tongue, and people. And further: ‘Discoveries latent with such potent power, either for the blessing or the destruction of human beings, as to make man’s responsibility in controlling them the most gigantic ever placed in human hands. … This age is fraught with limitless perils, as well as untold possibilities.’”

President Spencer W. Kimball similarly prophesied, “I believe that the Lord is anxious to put into our hands inventions of which we laymen have hardly a glimpse.”

Advances in communication and media seem to be a “literal fulfillment of the prophecies of King Benjamin, President McKay, and President Kimball,” Elder Stevenson said.

He then shared examples of how technology is being used to build the Lord’s kingdom on earth. “In 1996, the Church officially began use of the web as a messaging and communication vehicle. Since then, an estimated 260 Church-sponsored websites have been introduced, including sites available in nearly every country where members of the Church live, in their local language.”

Church apps such as Gospel Library, Mormon Channel, LDS Tools, LDS Music, and Family Tree are being used millions of times each week by millions of users, he said.

Since 2010, the Church has also been adopting social media including Facebook, Instagram, Pinterest, Twitter, and Snapchat to accomplish “spreading the knowledge of a Savior,” he continued. “Institutionally, we are using these social media sites in a powerful way.”

For example, a video segment of a “tender” message on depression given by Elder Jeffrey R. Holland of the Quorum of the Twelve Apostles during general conference has received more than 2 million views on Facebook alone, with many thousands of likes, shares, and positive comments.

In addition, the Church posted a video on Instagram highlighting a speech at the United Nations by Sister Jean B. Bingham, Relief Society General President. The video received more than 102,000 views in the first three days.

But while new technologies hold many virtues when used appropriately, there are also many risks, Elder Stevenson warned. “We should be very aware of the time that can be consumed in social media or in the use of mobile apps,” he said. “The use of social media also carries a risk of reducing face-to-face interaction, which may be stifling the development of the social skills of many young people.

“The hazards associated with inappropriate content cannot be understated. There is an increasing epidemic of pornography addiction in society, which is negatively affecting and victimizing even Church members and families,” the Apostle said.

Elder Stevenson said as he pondered and prayed about his message, he woke early in the morning with the lyrics of a song on his mind: “How lovely are the messengers who preach us the gospel of peace.”

“Ours is the message of peace, and you are the lovely messengers that preach it,” he said. “We live in a unique world, in the fulness of times, with the ability to preach the gospel of peace literally at our fingertips.” 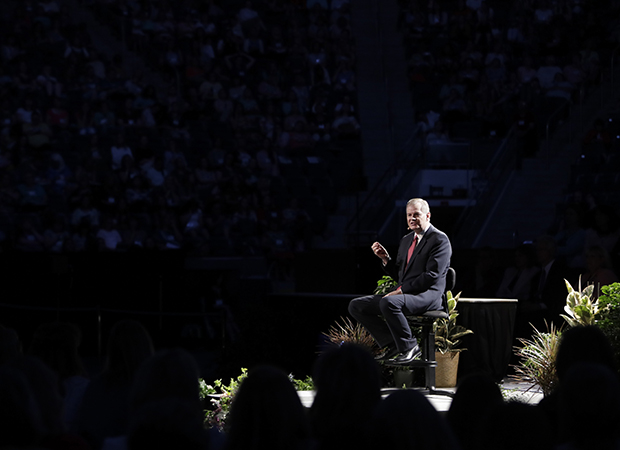 Elder Gary E. Stevenson of the Quorum of the Twelve Apostles speaks during the closing session of the annual BYU Women’s Conference held May 4–5 in Provo, Utah.