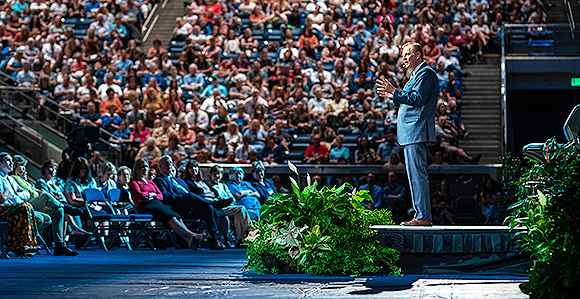 Elder Stevenson speaks at a devotional during BYU Education Week in the Marriott Center on August 20, 2019. Photo by Jaren Wilkey/BYU.

“The Book of Mormon is the engine that powers conversion and a change of heart, leading us closer to Jesus Christ.” —Elder Gary E. Stevenson

Highlighting key moments of the ongoing Restoration of the gospel of Jesus Christ, Elder Gary E. Stevenson shared his firm testimony on August 20 of the “heavenly events” that have occurred in the Lord’s true and living Church since the early 1800s.

“It fills me with unspeakable joy to know that Jesus Christ stands at the head of this Church, that the Book of Mormon was translated by the gift and power of God, and is the word of God, and that Joseph Smith was the Prophet of this, the final dispensation,” said the member of the Quorum of the Twelve Apostles.

Speaking during the annual BYU Education Week devotional to thousands gathered in the Marriott Center in Provo, Utah, Elder Stevenson presented a “time travel” expedition—focusing on key moments in the history of BYU, Education Week, and The Church of Jesus Christ of Latter-day Saints.

Elder Stevenson shared a video clip from the tour where the Church president testifies of the ongoing Restoration: “If you think the Church has been fully restored, you are just seeing the beginning,” said President Nelson. “There’s much more to come. Wait until next year… and then the next year. Eat your vitamin pills. Get your rest. It’s going to be exciting!”

For Elder Stevenson, listening to President Nelson speak and testify of the dynamic Restoration was thrilling. “We are blessed to have a prophet in our day who continues the Lord’s work that began almost 200 years ago in Upstate New York.”

Quoting from Preach My Gospel, Elder Stevenson shared a statement about missionary work: “Whatever your initial approach, refer quickly and simply to the Restoration of the Gospel, for this is our unique message to the world.”

Elder Stevenson then embarked on additional “time travel,” visiting the beginning moments of the Restoration. Almost 200 years ago, the 14-year-old Joseph Smith experienced the First Vision. In 1823, the Angel Moroni appeared to Joseph and described a record on gold plates “that Joseph would translate and later become a steward.” Later, under Moroni’s direction, Joseph Smith took possession of the plates and began the work of translation, which was completed in June of 1829.

It’s not fully known how the translation of the Book of Mormon was accomplished.

“What we do know is what was done is an absolute miracle, even in today’s standard with modern tools of electronic dictionaries, word processing, (and) machine learning in translation, the pace and subsequent work product are almost unthinkable.”

Yet even during the 85 days that Joseph Smith and his scribe, Oliver Cowdery, worked together on the translation, many other monumental elements of the Restoration took place—including the restoration of both the Aaronic Priesthood and Melchizedek Priesthood and several revelations that are now sections of the Doctrine and Covenants.

Elder Stevenson asked his vast audience to consider that miraculous period of translation and restoration.

“Imagine accomplishing the complete translation of the Book of Mormon, and all the additional events just described, in about two weeks less time than a typical semester at BYU.

“That is what Joseph Smith did.”

The translation and publication of the Book of Mormon was truly miraculous—but the miracles don’t end there.

“Each and every day, miracles surrounding the Book of Mormon continue,” he said.

Quoting President Nelson, Elder Stevenson said, “The power of the Book of Mormon is most evident in the mighty change that comes into the lives of those who read it ‘with a sincere heart, with real intent, having faith in Christ.’

“I believe this is why the Prophet Joseph Smith defined it as ‘the keystone of our religion.’ The Book of Mormon is the engine that powers conversion and a change of heart, leading us closer to Jesus Christ,” said Elder Stevenson.

The Book of Mormon, he added, is a miracle that brings forth other miracles of happiness and lasting joy.

Concluding, Elder Stevenson asked a question of his audience: How does one make the Book of Mormon the keystone to one’s personal testimony?

“We start by becoming personally familiar with it. By reading, pondering, and praying about its truthfulness.

“We could think about the devotion of the Prophet Joseph Smith to get the book to us. Perhaps resolve to spend more time reading it. It is so simple for us. We all have it with us almost continually.

Elder Stevenson encouraged listeners to take some of their “precious screen time” and give the Book of Mormon. “It really is simple.”

He concluded by sharing the testimony of his fifth great-grandfather, Edward Stevenson, who as a 13-year-old boy in 1833 listened to the Prophet Joseph Smith when he came to his community in Pontiac, Michigan, and spoke in the old log schoolhouse. Edward Stevenson recorded these words in his own journal: “O how these words thrilled my entire system and filled me with joy unspeakable to behold one who, like Paul the apostle of olden time, could with boldness testify that he had been in the presence of Jesus Christ.” 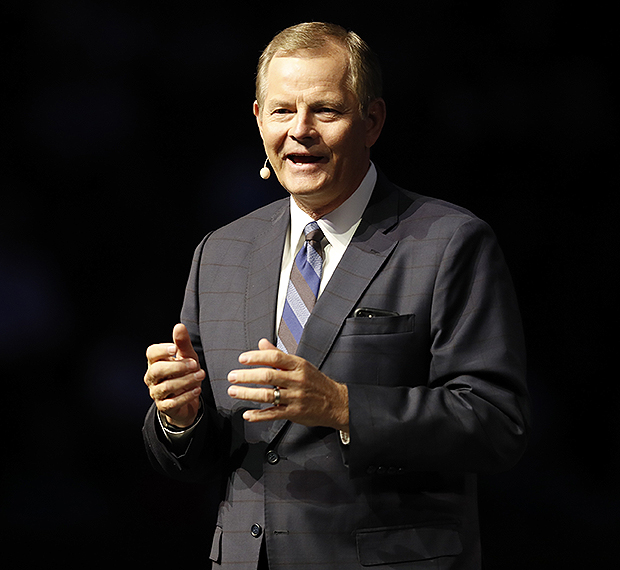 Elder Stevenson speaks at a devotional during BYU Education Week in the Marriott Center on August 20, 2019. Photo by Jaren Wilkey/BYU.

Thousands are again participating, ranging in all ages. Sixty-five percent of the classes focus on religious issues, with the remaining courses centered on education and personal development. More than half of BYU Education Week’s presenters are from outside BYU or Church Education System faculties.

BYU Education Week has been “a great tradition” for 97 years, beginning in 1922 in what was originally called “Leadership Week,” he said.  For the first three decades, it was held in the winter to accommodate farmers in rural areas.

While the 2019 iteration of Education Week includes timely instruction on family and marriage relationships, finance, and technology, its original course topics included farming and homemaking.

“My mother was a faithful attendee every year,” he said. “I have not forgotten the three or four days every summer when she was away in Provo, and immediately upon her return, being the recipient of all the gospel principles shared with her at Education Week, as well as others, including job charts, trying to make us better children.” 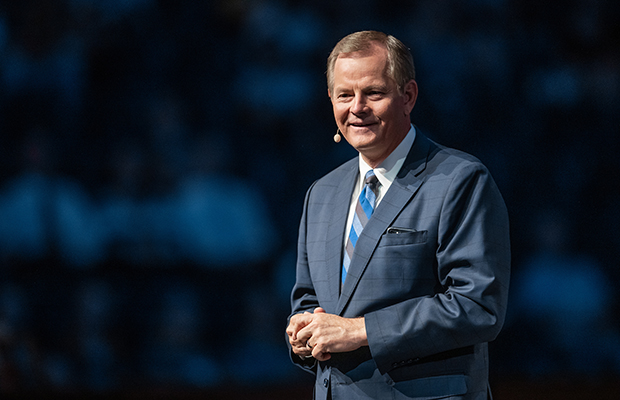 Elder Gary E. Stevenson of the Quorum of the Twelve Apostles speaks at a devotional during BYU Education Week in the Marriott Center on August 20, 2019. Photo by Jaren Wilkey/BYU.

World War II forced the cancellation of Education Week for several years. But the resilient event returned, drawing larger and larger crowds with each passing decade. By the 1980s, Education Week registration had entered the computer era.

Today, millions have access to BYU Education Week and other events at the Church-owned school via BYUtv and through a host of cable carriers and streaming services.

“In a typical week, there are over 2 million views on these channels,” said Elder Stevenson. “Isn’t this an astounding difference in just under 100 years since this all began with around 3,000 registered to view then ‘Leadership Week’ in person?”

The global reach of BYU Education Week reflects the ongoing restoration of the gospel. 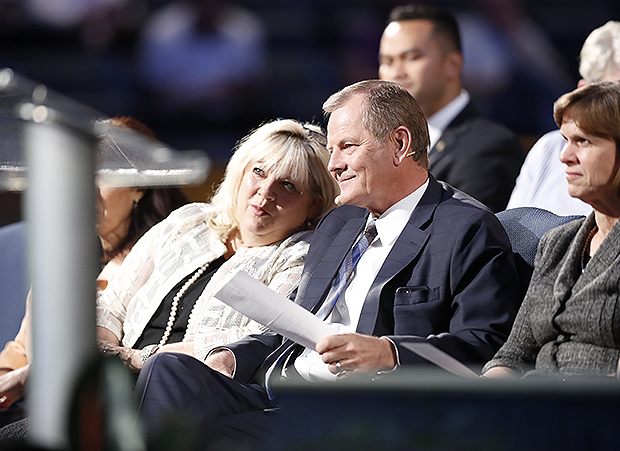 Elder Gary E. Stevenson of the Quorum of the Twelve Apostles and his wife, Sister Lesa Stevenson, sit on the stand prior to Elder Stevenson speaking at a devotional during BYU Education Week in the Marriott Center on August 20, 2019. Photo by Jaren Wilkey/BYU. 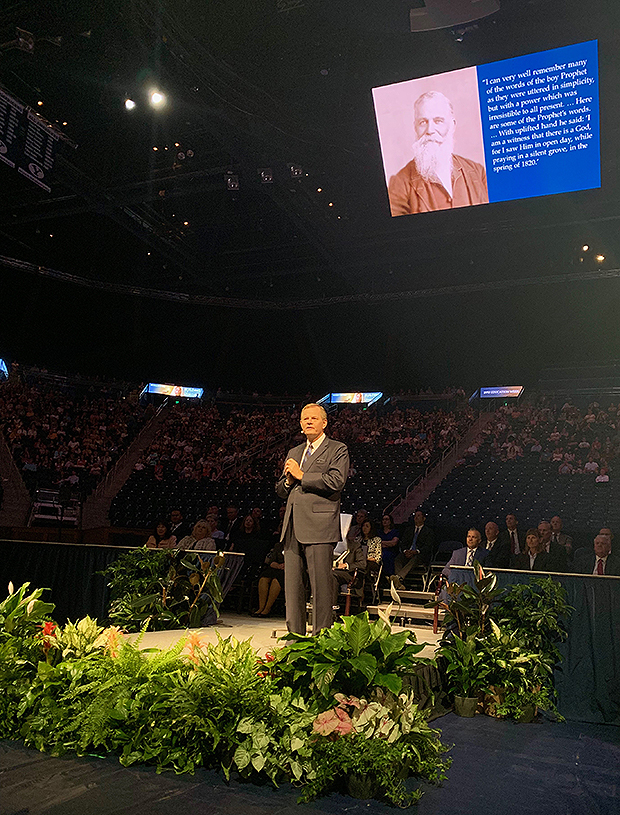 Elder Gary E. Stevenson of the Quorum of the Twelve Apostles speaks at a devotional during BYU Education Week in the Marriott Center on August 20, 2019. Photo by Jaren Wilkey/BYU. 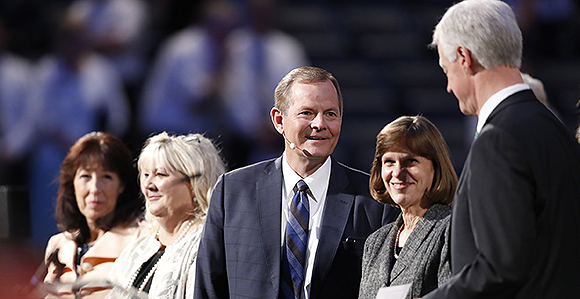 Elder Gary E. Stevenson of the Quorum of the Twelve Apostles, center, and his wife, Sister Lesa Stevenson, left, on the stand with BYU President Kevin J Worthen and his wife, Sister Peggy Worthen, prior to Elder Stevenson speaking at a devotional during BYU Education Week in the Marriott Center on August 20, 2019. Photo by Jaren Wilkey/BYU.