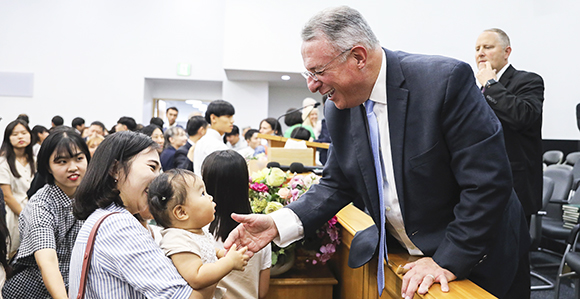 Elder Ulisses Soares of the Quorum of the Twelve Apostles of The Church of Jesus Christ of Latter-day Saints greets members after a nationwide member broadcast in Seoul, South Korea, on Sunday, August 25, 2019.

“We came away feeling there is great hope for these countries in the rising generation. They want to stay on the covenant path.” —Elder Ulisses Soares

The future of the Church in Japan and South Korea relies on the inspired principle of members inviting others to enjoy the blessings of The Church of Jesus Christ of Latter-day Saints, said Elder Ulisses Soares after his first visit to the Asian countries.

“There are promises made by prophets about the growth of the Church in the area,” said Elder Soares of the Quorum of the Twelve Apostles. “It was wonderful to be there, see promises of growth being fulfilled, and learn of their culture.”

In countries where great pressure is placed on secular education and professional success, there is also great spiritual orientation, he said.

The majority of today’s Latter-day Saint leaders in South Korea and Japan joined the Church in their youth. The respect shown one another in Japan and South Korea “is a beautiful thing,” said Elder Soares. “There is a great history of conversion that comes from inviting one another.”

During the trip Elder Soares and Elder Vinson and their wives, Sister Rosana Soares and Sister Kay Anne Vinson, participated in a nationwide young single adult broadcast and member devotional in South Korea, an interview with a daily newspaper reporter in Seoul, South Korea, and a special devotional for Portuguese speakers in Nagoya, Japan. 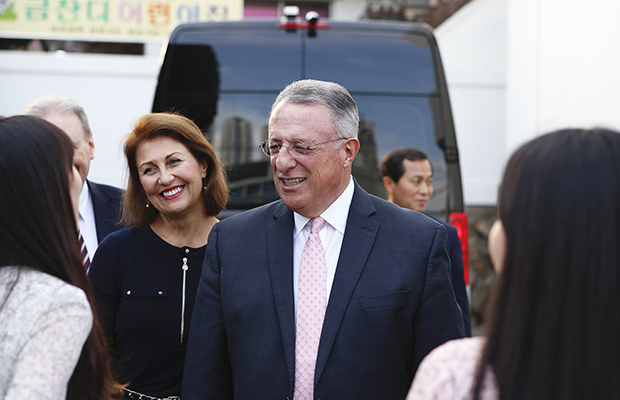 Elder Ulisses Soares of the Quorum of the Twelve Apostles and Sister Rosana Soares arrive at a young single adult devotional in Seoul, South Korea.

Elder Soares and Elder Vinson also met with the Asia North Area presidency in Tokyo, Japan, conducting an area review on August 27 and August 28 and participating in a devotional with Church employees.

They discussed how parents and families can help youth enjoy gospel living. Both Elder Soares and Elder Vinson praised the efforts of the Area Presidency.

A highlight of the visit for the leaders was a journey to the main sanctuary of the Meiji Shrine in Tokyo, Japan, to renew 20 years of friendship between leaders of the Shinto religion and the Church. “It was a special experience,” said Elder Soares.

Priest Moriyasu Ito led the journey to the shrine, describing its origins and purpose. Gifts were exchanged with Priest Seitaro Nakajima and Priest Nakajima Guuji.

Speaking of common ground and some similarities between the two religions, Elder Soares added, “I felt a connection because of the truths we share.” 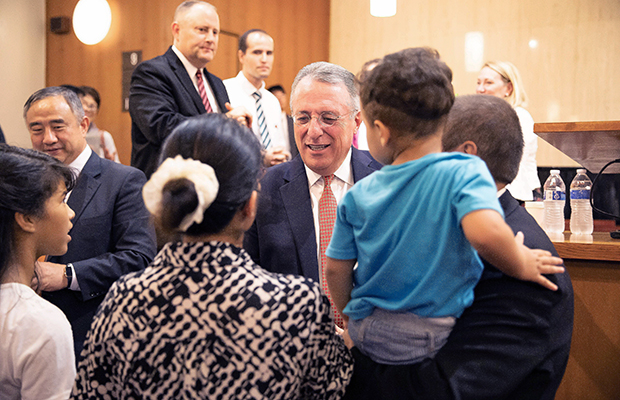 Elder Ulisses Soares of the Quorum of the Twelve Apostles and Area leaders greet members during a visit to South Korea and Japan August 21 through September 1, 2019.

Another highlight included a special Portuguese devotional held in the Fukutoku Ward in Japan. Some 100 Portuguese-speaking members in the Tokai area attended the devotional and were taught by Elder and Sister Soares. “We can always be happy through our own choices even though we are living far way from our native country and having difficulties in the local language,” said Sister Soares.

Elder Soares promised that the Lord would bless them as they obey Him and keep His commandments. He encouraged members to hold a valid temple recommend. “The temple is the most sacred place on earth,” he said. “President [Russell M.] Nelson has recently announced 27 new temples, including temples in Okinawa, Japan; Guam; and Brazil.”

Sometimes missionaries think because they are serving in Japan or South Korea, it will be hard to share the gospel, said Elder Vinson. This is simply not true. Missionary work is progressing “very well in Japan and [South] Korea.”

“Every person has the light of Christ in them,” said Elder Vinson. Once they receive an invitation, “they will feel and recognize and like what they are taught.” 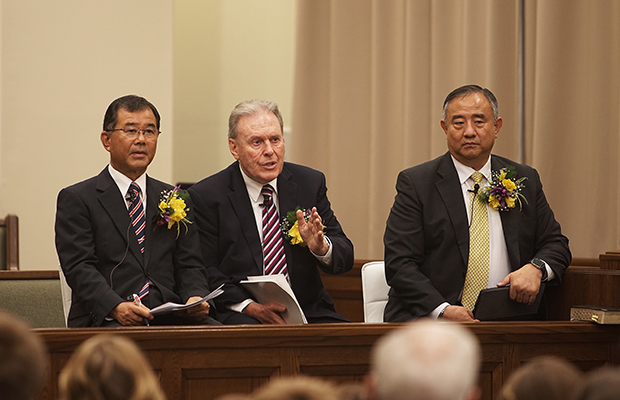 He said Church members and missionaries in both Japan and South Korea were wonderful and full of faith. “We came away feeling there is great hope for these countries in the rising generation. They want to stay on the covenant path.”

They were touched by Elder Soares’s visit. “You could see the emotion in their faces and the love they felt from him.”

Elder Soares said Latter-day Saints in Asia are very spiritual. “When you mingle with them you feel how loving they are, how concerned with family they are.” 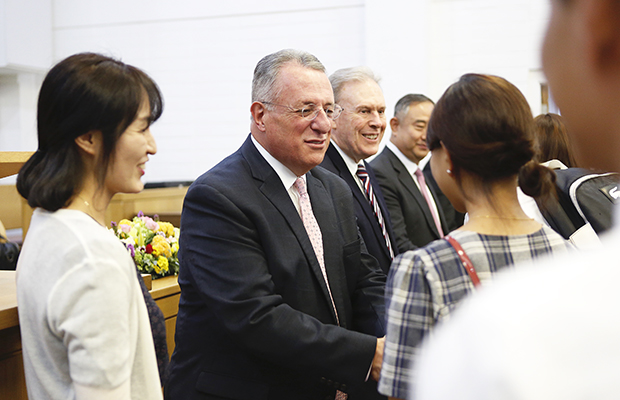 Elder Ulisses Soares of the Quorum of the Twelve Apostles and Area leaders greet members during a visit to South Korea and Japan August 21 through September 1, 2019. Members of the Church gather for a devotional with Elder Ulisses Soares of the Quorum of the Twelve Apostlesin Sapporo, Japan, on August 30, 2019. A Latter-day Saint woman asks a question during meetings with Elder Ulisses Soares of the Quorum of the Twelve Apostles during his visit to South Korea and Japan from August 21 through September 1, 2019. Elder Ulisses Soares of the Quorum of the Twelve Apostles and his wife, Sister Rosana Soares, speak to members during a visit to Soiuth Korea and Japan from August 21 through September 1, 2019.