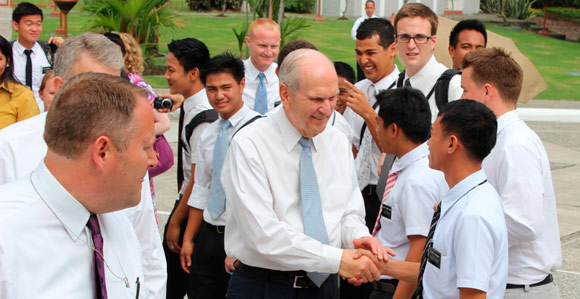 When Elder Russell M. Nelson of the Quorum of the Twelve Apostles dedicated the new missionary training center that stands near the Manila Philippines Temple, he was a witness of and a participant in the ongoing growth of the Church in this nation of islands in the western Pacific Ocean.

The Philippines Missionary Training Center, which Elder Nelson dedicated on May 20, can house up to 144 missionaries from the Philippines, Cambodia, Hong Kong, India, Indonesia, Mongolia, Pakistan, Sri Lanka, Taiwan, and Thailand. These “locally grown” missionaries are trained in the languages of their home countries.

In offering the prayer to dedicate the new facility, Elder Nelson expressed gratitude for the Atonement of Jesus Christ and for faithful missionaries and Church members worldwide who love and serve the Lord. He asked for a blessing upon the Republic of the Philippines to “maintain open doors of welcome” to all the Lord’s servants and that the nation’s people will be blessed with “freedom and accountability to grow in righteousness, both temporally and spiritually.”

The new center has two buildings. The first houses state-of-the-art training facilities, including an auditorium, the Joseph Smith Hall. Also in the building are translation booths, a computer lab, a laundry area, teaching rooms with built-in audiovisual equipment, and sleeping quarters for the missionaries. The second building houses additional teaching rooms and offices of the MTC’s presidency and director.

The new facility far outpaces the first missionary training center in the Philippines, which started on October 3, 1983, with 26 missionaries—16 elders and 10 sisters. Their training, under Barnard Van Wagonen, was held in a rented private residence in Metro Manila.

A new training center opened on July 13, 1992, across the street from the Manila Temple.

The current MTC is located on the site of the previous center. Training began on December 27, 2011, as the 528th group of missionaries arrived, comprising 53 elders and 12 sisters.

Elder Nelson returned to Salt Lake City on May 27. In a conversation with the Church News in his office, he spoke of the missionaries he met at the new MTC and throughout the Philippines. “It is a thrill to see these enthusiastic, intelligent, highly focused missionaries,” he said.

Elder Nelson met on May 24 with Jejomar Binay, vice president of the Republic of the Philippines. The meeting took place in the Coconut Palace, where the vice president holds office.

After the introductions, the conversation revolved on various topics. Elder Nelson said that Vice President Binay asked him where the name “Mormons” comes from. Elder Nelson explained the origin of the nickname and told him about the Book of Mormon.

Elder Michael John U. Teh, President of the Church’s Philippines Area, answered Vice President Binay’s question regarding the difference between chapels and temples.

A major topic of conversation during the visit was the Church’s humanitarian efforts. The government leader was particularly interested in the Church’s partnership with Catholic Relief Services to build low-cost homes for typhoon victims in Cagayan de Oro City, on the island of Mindanao. Elder Nelson told the vice president of the Church’s willingness to be a partner with his government office for worthwhile projects that will benefit the people.

Also on Elder Nelson’s itinerary—and among the main purposes for his trip to the Philippines—were training meetings at an interim mission presidents’ seminar and area council meetings. In addition, he spoke at devotionals with young single adults and with other members in Manila, Makati, Angeles, and Cebu City.

After returning to Salt Lake City, Elder Nelson reflected upon the Latter-day Saints he met in the Philippines and commented especially on the harmony and synergy of the leadership of the Church in a country where there are more than 650,000 members in 83 stakes and 17 missions. There are two temples in the Philippines: Manila, dedicated in 1984, and Cebu City, dedicated in 2010.

“A Filipino General Authority, Elder Michael John U. Teh, presides over the area, aided by two other General Authorities, Elder Brent H. Nielson and Elder Ian S. Ardern,” Elder Nelson said. “They are all members of the Seventy. They are aided by 10 Area Seventies.”

Of his visit to the Philippines and seeing evidence of the blessings of the gospel of Jesus Christ there, Elder Nelson said, “I had an overpowering feeling as I contemplated the enormous loss of life of Filipinos and American military during World War II. It seems so senseless until you realize that this brought freedom for the people of the Philippines to hear the gospel of Jesus Christ. That was a very high price to pay for the privilege of subsequent generations to have the blessings of the gospel and the temple.”