Elder Renlund “Will Look to Heaven for Direction” 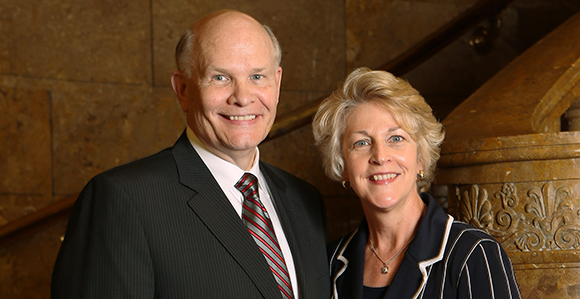 Elder Dale G. Renlund of the Quorum of the Twelve Apostles and his wife, Sister Ruth Lybbert Renlund, in Salt Lake City, October 6, 2015.

“Our choices, paths, and direction have been shaped by seeking for and following the whisperings of the Holy Ghost as we have earnestly sought for personal revelation.” —Elder Dale G. Renlund

Elder Dale G. Renlund was 11 years old when he had a spiritual witness that the Book of Mormon was true. He was living with his family in Sweden at the time. “The mission president, President Alvin Fletcher, issued a challenge to all of the Aaronic Priesthood youth,” recalled Elder Renlund. His brother, Gary, an Aaronic Priesthood holder, accepted the mission president’s challenge to read the Book of Mormon. Although not yet a deacon, young Dale followed his brother’s example and accepted the challenge as well.

“I remember praying and asking if it was true and having a distinct impression: ‘I’ve been telling you all along that it’s true.’ And that was an amazing experience.”

This experience set a pattern in Elder Renlund’s life: Seek for personal revelation and then follow it. Elder Renlund was sustained October 3 at general conference as one of the three newest members of the Quorum of the Twelve Apostles. He was born November 13, 1952, the second of four children of Mats Åke and Ranghild Mariana Andersson Renlund. His father was born in the Swedish-speaking city of Larsmo in western Finland. Elder Renlund’s grandparents joined the Church in 1912. Members in Larsmo lost contact with the Church in 1914 for many years because of World War I.

By the time contact with the Church had been restored, “my grandmother had lost 7 of her 10 children and her husband due to tuberculosis, leaving her with just three surviving children,” Elder Renlund said. “My father was the youngest, and he was born two months after his own father passed away.”

Later, Elder Renlund’s father went to Sweden where he met his future wife. “Her parents had been introduced to the Church on an island in the Stockholm archipelago, also in 1912. So, in the same year, on both sides of the Gulf of Bothnia, both sets of my grandparents heard the gospel and were right away converted,” Elder Renlund said.

Elder Renlund’s mother, who was working in Stockholm, met his father at church. She was determined to marry only in a temple. With no temple in Europe at the time, they came to Salt Lake City. She arrived in 1948, and he in 1950. The couple married in the Salt Lake Temple in May 1950.

The endowment ceremony had not yet been translated into Swedish. “So they went through the temple, not understanding a word and counting themselves eternally blessed,” Elder Renlund said.

Elder Renlund’s father was a skilled and successful carpenter and builder. He was called to be a building missionary for the Church in the early 1960s.

“And so our family went with him and lived for seven of the coldest months of my life in Helsinki, Finland,” Elder Renlund said. “Then, we went to Göteborg, Sweden, and I went to Swedish schools with my siblings.” The family returned to Utah three years later. Elder Renlund’s mother died in 1994 and his father in 2009. 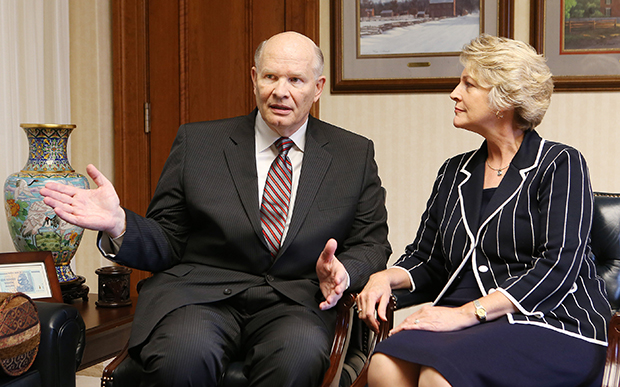 Elder Renlund served as an Area Seventy from 2002 to 2009. He was called to be a General Authority Seventy in April 2009 and assigned to the Africa Southeast Area. “One of the first thoughts I had after my call was that I would not be around when my father passed away. Unfortunately, that was the case.”

But Elder Renlund’s father did live long enough to hear his son speak at general conference in October 2009. His father was not well enough to attend the meeting in the Conference Center but tuned in to the broadcast.

“I remember after that Sunday session, going to him and asking, ‘Dad, did you watch conference?’

“That’s the reserved Finnish attitude. And that’s the best I got. So now, as I was sustained in [the recent] general conference, my sister, Anita, texted me and said, ‘I think Dad’s probably proud. He’s likely dropped the ‘almost.’”

As a young man, Elder Renlund returned to Sweden as a full-time missionary and served from 1972 to 1974 under President Herbert B. Spencer and, later, President L. Ronald Folkersen. “My mission was what you would expect it to be, a lot of work but just a wonderful experience,” he said, “life-changing in terms of commitment and deciding to do the best one can to be a disciple of Christ.” 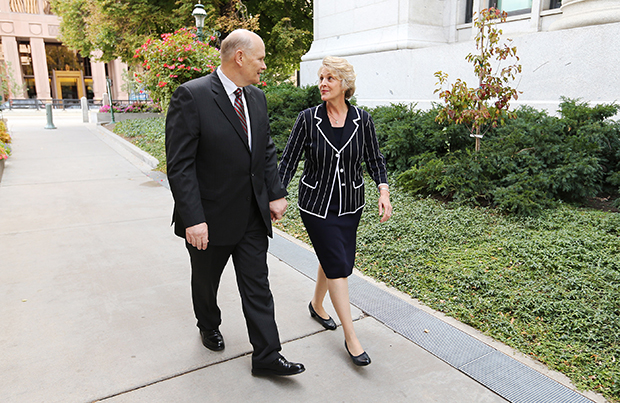 He returned home and pursued an education in medicine, eventually becoming a successful cardiologist.

Along the way, his attention was drawn to a young woman, Ruth Lybbert, in his home ward, the Valley View 1st Ward in Salt Lake City. She was the daughter of the stake president, Merlin R. Lybbert, who would eventually serve the Lord and the Church as a member of the Seventy.

A self-described “horrible dater” as a young single adult, he mustered the courage to ask her out, was told “no” at first, but overcame the perceived rejection and asked again a few months later.

They were married June 16, 1977, in the Salt Lake Temple, and “aside from the decision to be active in the Church, marrying Ruth has been the most amazing thing in my life,” he said.

They have pursued life’s adventures together, both committed to seeking and following the direction of the Spirit. Sister Renlund earned a degree in history and certified to teach in secondary school. She taught high school for three years in Salt Lake City while Elder Renlund pursued a medical degree. Their daughter, Ashley, was born at this time.

From 1980 to 1986, the Renlunds lived in Baltimore, Maryland. During those years, Elder Renlund received further medical and research training at Johns Hopkins University and Hospital. However, in 1981, their lives were turned upside down. Sister Renlund was diagnosed with ovarian cancer and underwent two surgeries and a year of chemotherapy.

“Early on in the illness, Sister Renlund decided that she needed to do something to take her mind off the illness,” Elder Renlund said, “and that’s when she was inspired to go to law school.”

“I just thought, this will only be a bad experience unless we make something good of it,” Sister Renlund said. “It wasn’t in our plan for me to have cancer as a young woman and have only one child. And my survival was in doubt. We felt like law school was the right thing, and I really felt inspired that that’s what I needed to do.”

During the last three years that the Renlunds lived in Baltimore, Sister Renlund attended the University of Maryland School of Law and Elder Renlund served as the bishop of the Baltimore Ward.

She became eminently successful in her chosen profession. By the time of Elder Renlund’s call as a General Authority in 2009, she was president of her law firm, was on boards of directors of the Deseret News and Worker’s Compensation Fund, chaired Utah’s Judicial Conduct Commission, and was the first woman president of the Utah Trial Lawyers Association.

“And when I was called and we were assigned to Africa, she just walked away from it, just left the nets and came,” Elder Renlund said, alluding to the example set by the original Apostles Christ called during His mortal ministry.

Based on their experiences, Elder Renlund said his message to Latter-day Saints would be encouragement to seek for personal revelation. “Our choices, paths, and direction have been shaped by seeking for and following the whisperings of the Holy Ghost as we have earnestly sought for personal revelation,” he said. “It’s important to look to heaven for direction rather than across to a neighbor or friend for guidance. We are all so different. That’s why we all need personal help.”