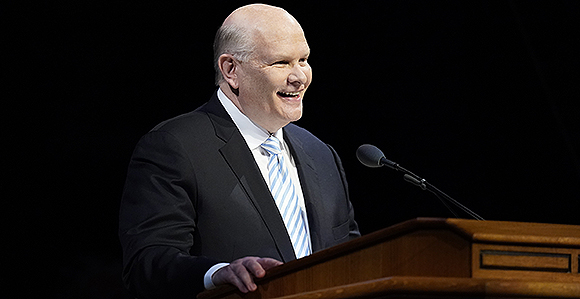 Elder Dale G. Renlund of the Quorum of the Twelve Apostles speaks during the BYU campus devotional in the Marriott Center in Provo, Utah, on December 3, 2019. Photo courtesy of BYU Photo.

“This is the three-part prescription for dysfunctional receptors for God’s love: repentance, scripture study, and partaking of the sacrament to have the Holy Ghost with us.” —Elder Dale G. Renlund

Hormones produced in the glands are transported in the bloodstream to stimulate specific cells by interacting with receptors. If the receptor is dysfunctional, illness can occur.

As a member of the Quorum of the Twelve Apostles, Elder Renlund also knows well the eternal dangers of a dysfunctional spiritual receptor.

In his Tuesday, December 3, devotional address at Brigham Young University’s Marriott Center, he testified that God’s love for His children is infinite, perfect, and without deficiency.

“But what do you do if you do not feel the love of Heavenly Father and Jesus Christ?” he asked his audience.

When a person’s receptor for God’s love is dysfunctional, God’s influence in his or her life is minimized. The ability to sense Heavenly Father and His Son’s love and caring concern is lost.

Receptor dysfunction for God’s love does not happen all at once—but slowly and imperceptibly over time.

Elder Renlund said he, like anyone else, is vulnerable to this type of receptor dysfunction. 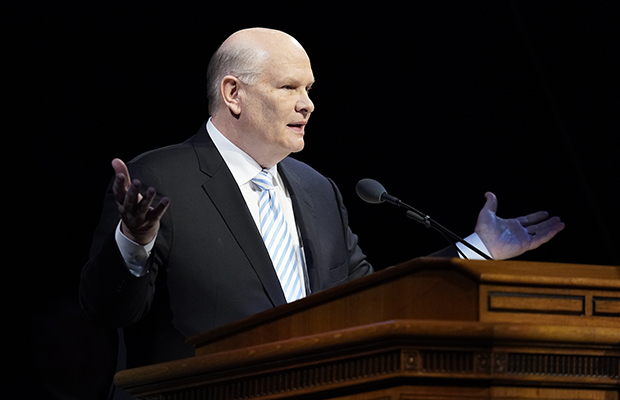 Elder Dale G. Renlund of the Quorum of the Twelve Apostles speaks during the BYU campus devotional in the Marriott Center in Provo, Utah, on December 3, 2019. Photo courtesy of BYU Photo.

Several years ago, he and his wife, Sister Ruth Renlund, and their daughter, Ashley, were living in Baltimore while he received advanced medical training at Johns Hopkins Hospital. The training years were “brutal, time intensive, and exhausting.”

By the end of his first year at Johns Hopkins, young Dr. Renlund was weary. His rigorous schedule allowed him to attend church on Sundays only about half the time.

“One Sunday, I could tell that if I really hurried with my work, I would be able to go with my wife and daughter to church,” he said. “But then, I had this thought: If I slowed down a little bit and waited, I would not get home until after my wife and daughter had departed. Then I could skip church and take a nap.

“It mortifies me to say that I did exactly that.”

But sleep did not come. Instead, he “was profoundly disturbed.” He had always loved going to church. He had a strong testimony of Christ’s living reality. But on that afternoon, he realized the intensity was not there.

“I had stopped consistently doing some personal, private acts of devotion,” he said. “My routine was that I would get up in the morning, say a prayer, and go to work. Sometimes, there would be no distinction between the end of the day and the beginning of the next. I would work through the night and the next day, come home late that second day, and fall asleep without a prayer and without reading anything in the scriptures.

“The following day, the cycle started again. I had allowed my receptors for God’s love to become dull so that the things of the Spirit were less urgent and less important.”

Elder Renlund remembers getting off the couch, kneeling on the floor, and pleading with God for help and forgiveness. In his heart and mind, he formulated a plan to change his pattern of behavior.

He began with simple reminders.

His daily “to do” list included morning and evening prayers. He brought a copy of the Book of Mormon to his cubicle at the hospital and read each day, even if it was just a few verses. He committed to never miss an opportunity to partake of the sacrament.

“As I enacted my new course of action, the intensity returned and my testimony burned brightly again. I shudder to think what would have happened if I had not gotten off that couch that Sunday afternoon. My life would have been very different. Instead, Heavenly Father and Jesus Christ became central to my life again. My receptors for God’s love and my affinity for the Spirit improved.”

An inability to sense God’s love can also stem from sin or “not pressing forward on the covenant path.”

“Repentance is a joyful process. Remember that God does not really care who you were and what you did. He cares who you are, what you are doing, and who you are becoming.”

The second step, he said, is what President Russell M. Nelson refers to as “daily feasting on the words of Christ in the Book of Mormon.”

And third, he made sure that he never missed an opportunity to partake of the sacrament so he could have the Holy Ghost with him.

“This is the three-part prescription for dysfunctional receptors for God’s love: repentance, scripture study, and partaking of the sacrament to have the Holy Ghost with us. If we do not address this dysfunction early on, we will end up ‘past feeling’ (1 Nephi 17:45). And that is spiritually fatal.”

By addressing one’s dysfunctional receptors for God’s love, a person restores power, stability, and direction in his or her life.

“The prognosis when this receptor dysfunction is treated,” he promised, “is excellent.”

Elder Renlund closed by inviting his vast audience to “give yourself an early Christmas present and get off the couch, like I did that Sunday afternoon long ago.”

Take steps to ensure the spiritual receptors for God’s love are fully functional.

“Then, as you continue doing these personal, private acts of devotion, you will not slip back into receptor dysfunction.” 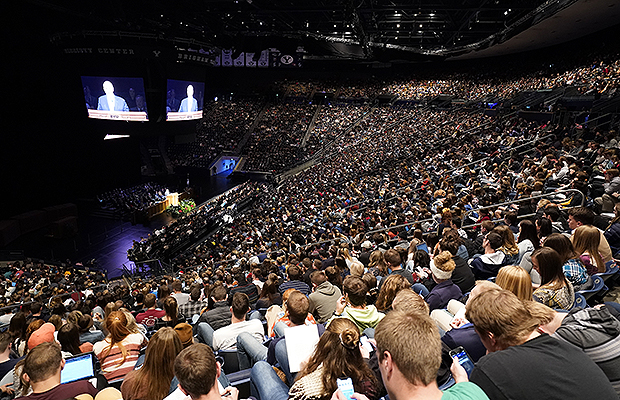 Students listen to Elder Dale G. Renlund of the Quorum of the Twelve Apostles speak during the BYU campus devotional in the Marriott Center in Provo, Utah, on December 3, 2019. Photo courtesy of BYU Photo.

In her Tuesday devotional address, Sister Renlund said that in a world filled with fictional superheroes, Christ’s followers have access to a superpower greater than any ever conceived.

“You can have God’s power in your life—the ultimate, very real superpower.”

Great power, she said, comes through the covenant of baptism and the sacramental covenants.

“Linking ourselves with His name helps us identify with Him and changes us as we take on His attributes and characteristics.”

Just days before accepting that honor, Dr. Selzman was checking on his patients following a full day of operations. After examining one patient, he realized the patient needed to go back to the operating room.

For a moment, Dr. Selzman was frustrated and disappointed. He knew he would be spending another long night in the hospital. But then he reflected upon his upcoming appointment to the Russell M. Nelson chair. He knew Dr. Nelson was a surgeon with a reputation for being a gentleman who kept his emotions in check and always treated his operating team with kindness and respect.

Dr. Selzman decided to follow Dr. Nelson’s example in the operating room. He changed his attitude and behavior because he realized his name was linked to Russell M. Nelson.

“Perhaps we should reflect on what can and should happen to us as we link ourselves with the name of our Savior,” said Sister Renlund. “As we do, we too can change. We will gain power—superhuman power—godly power to turn toward our Savior and become more like Him. We can have the power to resist temptation and to be protected from the evil one, power to accept and fulfill challenging callings, power to discern truth from error, power to make critical decisions in our lives that will keep us on the covenant path, power to find joy regardless of our circumstances, power to sort through life’s many activities and to choose those things that are higher and holier.”

By taking on Christ’s characteristics, she concluded, one can experience the fruits of the Atonement, greater peace, greater charity, greater love, and gratitude for the Savior.