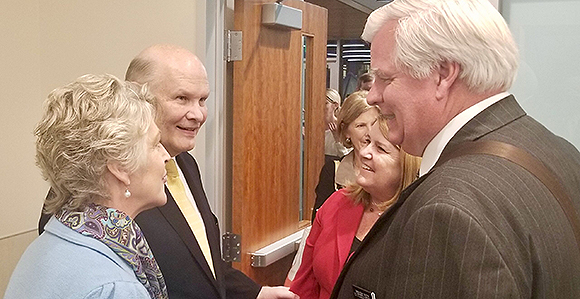 Elder Dale G. Renlund and Sister Ruth Renlund, left, visiting with President Raymon D. Foote and Sister Cindy Foote, of the South Africa Missionary Training Center, who were attending the 2020 MTC Leadership Seminar. The Renlunds met with the new MTC leadership couples for dinner prior to speaking at a Provo MTC devotional on January 14, 2020, in Provo, Utah.

Reminding missionaries they “share the same apostolic calling” as his fellow members of the Quorum of the Twelve Apostles, Elder Dale G. Renlund encouraged listeners at the Church’s missionary training centers worldwide to “treasure up continually the words of life.”

Elder Renlund focused his January 14 remarks broadcast from the Provo MTC on Doctrine and Covenants 84:85: “Neither take ye thought beforehand what ye shall say; but treasure up in your minds continually the words of life, and it shall be given you in the very hour that portion that shall be meted unto every man.”

Missionaries “need to acquire the words of life to be able to teach in a specific teaching opportunity,” Elder Renlund said, adding that “the Holy Ghost cannot bring to remembrance that which has not been learned in the first place” and that “the words of God to be treasured are those words that, if hearkened to, will lead to eternal life.”

In an address preceding her husband’s, Sister Ruth Renlund said God’s eternal love for all His children will be one of the reasons missionaries faithfully serve their respective missions as well as be the foundation for all they teach while on their missions.

“The nature of our Heavenly Father and Jesus Christ and Their love for all is one of the great truths of the restored gospel of Jesus Christ,” she said. “I know that God loves us so much that He gave His Only Begotten Son for us to atone for our sins. They want all people on earth to have Their love in their lives.” 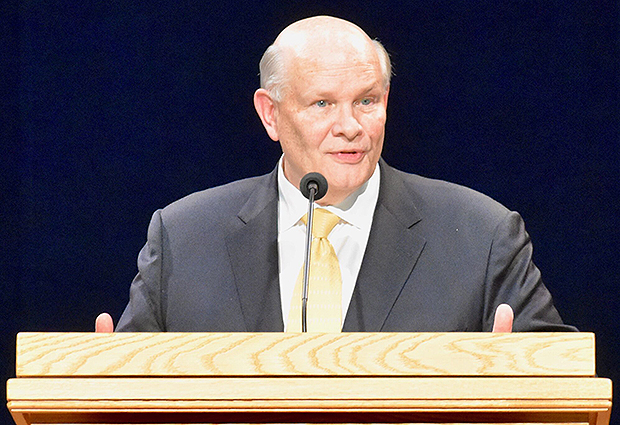 Sister Renlund said that in her mind, missionaries are one of the obvious expressions of God’s love, as they find, teach, help, baptize, and fellowship one by one.

“God expresses His love for each person on earth by sending personal emissaries into the world to find ‘the one’ who is ready to receive His word,” she said, adding that God permits and invites each person to make covenants with Him—again, one by one—to be bound to Him, helped by Him, and known personally by Him.

“Just like Jesus knew the name ‘Joseph Smith’ in that grove of trees almost 200 years ago, He knows your name and loves you uniquely.”

She shared an experience she learned of while the Renlunds were assigned to the Africa Southeast Area, during a difficult time for some missionaries to obtain visas for their fields of service. Elder Tulani Tembe didn’t receive his visa for Zimbabwe and voiced his displeasure when reassigned as a visa-waiter in South Africa.

The mission president felt impressed to send Elder Tembe to the southern coastal city of George, where the branch president asked him and his companion to visit and teach a long-inactive returned missionary named Brother Mafikeng.

They arrived for their appointment, starting with introductions. “Right as soon as I said ‘My name is Elder Tembe,’ he said, ‘Hold on, is your gogo [grandmother] Ma Tembe?’” wrote Elder Tembe to his mission president, as quoted by Sister Renlund. “Finding this rather strange, I questionably answered, ‘Yes.’ It was then when he left the room, [went] to his bedroom, where he pulled out a picture of himself and his companion, and in it was me and my grandmother.

“At that instant, tears were shed, and throughout further lessons it dawned on us that we knew each other.”

Elder Mafikeng had baptized the young Tulani Tembe more than a decade earlier, said Sister Renlund, continuing to quote the missionary: “It was also mentioned in my patriarchal blessing that on my mission I would teach people I am meant to teach, and I would love people who are meant to be loved by me.”

Before his Zimbabwe visa arrived, Elder Tembe served in South Africa for five transfers—and long enough in George to see Brother Mafikeng return to activity, resolve issues from years of inactivity, marry and baptize his fiancée, and accept a calling as the Young Men president.

Sister Renlund asked: “What do you think Elder Tembe thought of his seven and a half months in South Africa? Do you think he recognized that the Lord loved him and knew where and how his patriarchal blessing would be fulfilled? Do you think the Lord knows Elder Tembe and Brother Mafikeng? Yes.

“And He knows you, too. He will put in your path people who you can uniquely help and who will uniquely help you. It may be a companion, your mission leaders, or a member. During your mission, look for ways the Lord is showing you that He knows you and loves you. Take the time to record in your journal what you experience so you can remember how much the Lord loves you.”

Elder Dale G. Renlund speaks during a January 14, 2020, devotional at the Provo Missionary Training Center in Provo, Utah. The devotional was broadcast to the Church's MTCs worldwide. Photo by Scott Taylor.

The word of God, as Nephi implies, is permanently coupled with keeping the commandments, Elder Renlund said. “These words of eternal life are without effect unless they are associated with obedience and repentance.”

To invite people to repent and to help them repent, Elder Renlund said a missionary should treasure up material in three categories.

To treasure up the word of God, Elder Renlund said, “one should begin by asking, ‘what doctrine, correctly understood, would motivate someone to accept a specific invitation?’ That is the doctrine you should study, learn and teach.”

Those are the promises missionaries should study, learn and teach, he said. “Identify experiences where you have received these blessings for yourself. Otherwise, your teaching and testifying will be shallow.”

And third, to help people repent, one should treasure up answers to questions and concerns that people frequently raise as invitations are extended to them. Elder Renlund cited “Preach My Gospel” to provide help understanding the process—to record frequent questions in a study journal, to search the scriptures and other approved resources for answers, to pray for understanding, to record answers in the study journal, and to review findings with others.

“Please keep in mind that there are multiple doctrines, multiple blessings, and multiple questions and concerns,” Elder Renlund said. “So, your ‘treasuring’ is never finished.”

He admonished the missionaries to use the time set aside every day for personal and companionship study to work on that “treasuring.”

“Having continually treasured up the doctrines, promises, and answers to common concerns and questions that are associated with a specific invitation, you will be able to have ‘given to [you] in the very hour that portion that shall be meted unto every man,’” concluded Elder Renlund, underscoring the focused verse’s promise.

“And you receive from the Savior this remarkable promise that He gives to His friends: ‘And whoso receiveth you, there I will be also, for I will go before your face. I will be on your right hand and on your left, and my Spirit shall be in your hearts, and mine angels round about you, to bear you up’ ” (Doctrine and Covenants 84:88).

Elder Dale G. Renlund, right, and Sister Ruth Renlund watch and listen to a missionary choir during a January 14, 2020, devotional at the Provo Missionary Training Center in Provo, Utah. Photo by Scott Taylor.

A choir of missionaries at the Provo Missionary Training Center perform during a January 14, 2020, devotional with Elder Dale G. Renlund of the Quorum of the Twelve Apostles in Provo, Utah. Photo by Scott Taylor. 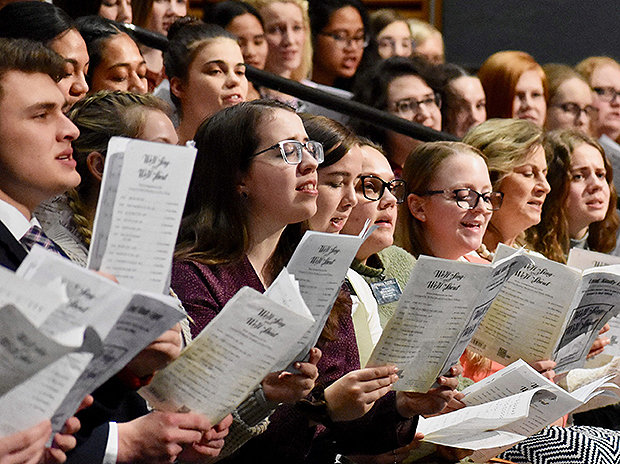 A choir of missionaries at the Provo Missionary Training Center perform during a January 14, 2020, devotional with Elder Dale G. Renlund of the Quorum of the Twelve Apostles in Provo, Utah. Photo by Scott Taylor.