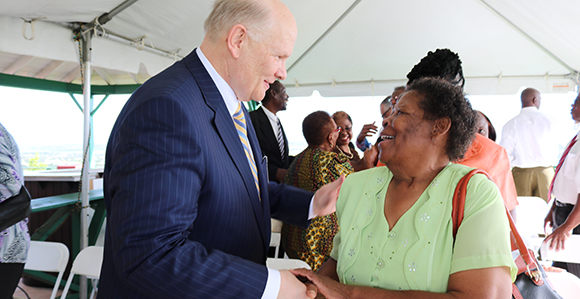 Elder Dale G. Renlund greets Thelma Brathwaite at the dedication of Barbados for the preaching of the gospel. Photo by P. Frank Sampson.

At storied Gun Hill Signal Station, Elder Dale G. Renlund of the Quorum of the Twelve Apostles on February 18 dedicated the island nation of Barbados for the preaching of the gospel, concluding a nine-day review of the Church’s Caribbean Area that included stops in the Dominican Republic and Haiti.

After a special district conference, a small group of Latter-day Saints in Barbados gathered to witness the dedication of their country for the preaching of the gospel, Elder Renlund told the Church News.

“Barbados was included in an apostolic dedication for the West Indies Mission in 1988,” Elder Renlund explained. “However, the First Presidency determined that a dedication specifically for Barbados was appropriate.”

Gun Hill Station, where Elder Renlund gave the dedicatory prayer, is one of the original six signal stations established in 1818–19 for the internal and external defense of Barbados. “From its hilltop vantage point, warning messages of impending threat were sent,” Elder Renlund said.

View from Gun Hill Signal Station, in St. George, Barbados, where Elder Dale G. Renlund dedicated the island nation for the preaching of the gospel. Photo by P. Frank Sampson.

Before the prayer was offered, Sister Yvonne Nelson, a pioneer member of the Church in Barbados, spoke briefly about her encounter with missionaries in 1979 and her journey of testimony and baptism, said Elder Renlund, who was accompanied by his wife, Sister Ruth Renlund; Elder Walter F. Gonzalez, General Authority Seventy and the President of the Caribbean Area, and his wife Sister Zulma Gonzalez; and Elder Claude Gamiette, an Area Seventy.

Sister Nelson told the Church News she was first contacted by missionaries in 1979.

“They started to give me some lessons,” she said. “They gave me a Book of Mormon and told me I should read, but before I read, I should pray and ask Heavenly Father if it was true.”

Active in her own Christian faith, Sister Nelson would attend LDS services after attending her own church. Over time, she said, she gained gospel knowledge about the premortal existence, the purpose of mortality, and life after death.

“What I didn't understand, the missionaries would make clear to me,” she said.

Joining the Church was “the best decision I ever made,” she said. “It helped me to get closer to Heavenly Father.”

She added, “Living a righteous life is not easy. There are ups and downs and temptations, but with Heavenly Father’s help, we can overcome them. We have to keep our covenants and do everything possible to do what Heavenly Father would want us to do. Sometimes we might not want to forgive our enemies, but we have to try to love everyone.” 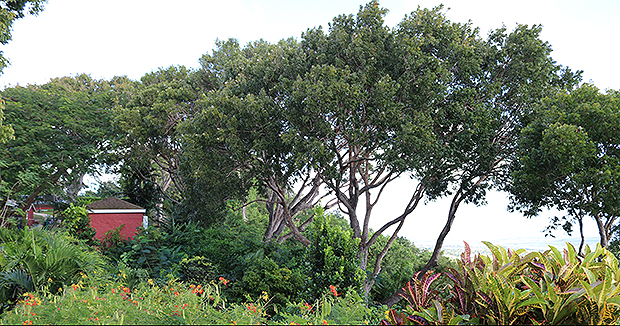 View from Gun Hill Signal Station, in St. George, Barbados, where Elder Dale G. Renlund dedicated the island nation for the preaching of the gospel. Photo by P. Frank Sampson.

In his dedicatory prayer, Elder Renlund blessed the land, the people, and the government. His prayer included a blessing upon those who had lived in Barbados but are now deceased that they would accept the gospel as living persons perform ordinances in their behalf.

The Apostle said the peaceful surrounding contributed to the spirit that accompanied the occasion.

“The Lord directed the blessing that I pronounced on this country,” he said. “He will see that it is fulfilled as the people act in faith.”

The Church leaders’ visit to the Dominican Republic February 9–13 coincided with the beginning of the observance of the 40th anniversary of the Church in that country, which occupies the eastern two-thirds of the island of Hispaniola. Some 130,000 Church members live there.

An unusual kind of celebration, the observance will include service projects, increasing of spiritual growth, and promoting interfaith relationships, said Elder Renlund.

“These faithful Saints are mature and strong in the gospel. As a result, they are not only establishing the Church on a firm foundation, but building a stronger country.”

Sister Renlund contributed to the celebration by lecturing at the law school of Pontificia Universidad Católica Madre y Maestra. She and Sister Denise Lindberg, a member of the Young Women general board and a retired trial court judge, spoke to an overflow audience in the school’s auditorium about the need to protect religious freedom.

The lecture was part of a partnership formed with the university last year at the first Caribbean Religious Freedom Symposium in which Elder Quentin L. Cook of the Quorum of the Twelve Apostles participated.

In Port-au-Prince, the capital of Haiti, Elder and Sister Renlund and Elder Walter and Sister Zulma Gonzales attended an evening meeting for youth. An overflow congregation came to hear an Apostle speak.

Elder Renlund reminded the young men of the priesthood responsibility they have to serve missions and promised them that a mission would change their lives for the better in every way.

He told the youth that as a seer, he could see that their lives would be happy and prosperous if they stayed on the covenant path that they had begun with baptism.

“I love meeting with the youth,” Elder Renlund said. “For me, the best part of the meeting was shaking the hands of nearly 900 members who stayed after the meeting. These youth are the future of the Church and the hope of the nation of Haiti. They are wonderful.”

In St. Marc, a 2½-hour drive from the Haiti capital, Elder and Sister Renlund visited a tutoring center where children of Church members can go to receive help with their school work. Called Foyer Coin Des Cieux (Corner of Heaven), the center helps 60 students, providing adult supervision, a snack, and assistance with various school subjects, including English.

The Renlunds and the Gonzalezes met with members and friends of the Church in St. Marc, where the Church has a district with four branches and a strong missionary effort. During the meeting, Elder Renlund taught the Church members about Lehi’s vision of the tree of life and urged them to “hold to the iron rod, the word of God,” which will lead them to the Savior. They were accompanied by Elder Hubermann Bien-Aimé, an Area Seventy, and his wife, Sister Maggy Bien-Aimé.

The visit to Haiti was capped off by a meeting with all missionaries serving in that land.