Elder Ronald A. Rasband and Sister Melanie Rasband, center, with Indian members at a gathering in New Delhi.

“It was exciting to be out in the frontier of the Church and see the members living the basic principles of the gospel and understanding what matters most.” —Elder Ronald A. Rasband of the Quorum of the Twelve

Elder Ronald A. Rasband of the Quorum of the Twelve Apostles first traveled to India—as a businessman—24 years ago.

He recently returned to that burgeoning Asian nation, this time on an ecclesiastical assignment as a member of the Quorum of the Twelve Apostles.

He was both inspired and invigorated by the changes he encountered in India. During his visits to several major cities he witnessed a country being transformed. The Indian economy is becoming a global power, and there is a growing middle class.

“Such developments,” he told the Church News, “are providing beautiful opportunities for the spreading of the gospel of Jesus Christ.”

Elder Rasband’s optimism for the region stretches beyond India. During his Asian trip November 11–23, he also traveled to Pakistan for meetings with members, missionaries, and government officials. Once again, he found committed Latter-day Saints, a growing respect for the Church, and further evidence that the Lord is “able to do [His] own work” (2 Nephi 27:20).

Elder Rasband was accompanied by his wife, Sister Melanie Rasband, along with, at various locales, Elder Gerrit W. Gong of the Presidency of the Seventy and Elder Randy D. Funk of the Seventy and their wives, Sister Susan Gong and Sister Andrea Funk.

While the Church is still young in India, the country is no stranger to modern-day prophets and apostles. President Russell M. Nelson, President of the Quorum of the Twelve Apostles, was in India just a few weeks ago.

“I was there on a bit of a harvest trip,” said Elder Rasband. “I was able to go to India and stand on the shoulders of others who had been there, turned the soil, and planted the seeds.”

“We did all of that in two days,” he said. “It was very special to organize the Bengaluru India Stake and realize the potential in India.” Elder Rasband noted the capacity and devotion of the Indian priesthood holders and the Relief Society sisters. Many come from multigenerational LDS families—but with an untraditional twist. In many instances, a young man or young woman has joined the Church and then shared the gospel with his or her parents, grandparents, and his or her own children.

The Church’s growth in India, he added, “all starts with the family.” Families anchored much of Elder Rasband’s counsel throughout his trip. While speaking at a November 16 member meeting in New Delhi, he held up a copy of “The Family: A Proclamation to the World.” He testified of the document’s essential teachings. He then asked if the proclamation had been translated into the local Hindi language. He was told it had not.

The man then produced a Hindi-language copy of the proclamation.

Copies were promptly made on a meetinghouse copy machine, and each family was given a copy when the meeting ended.

“For the members, it was as if they had been given new revelation,” said Elder Rasband. “They were so happy and thrilled to have the proclamation in their own language.” 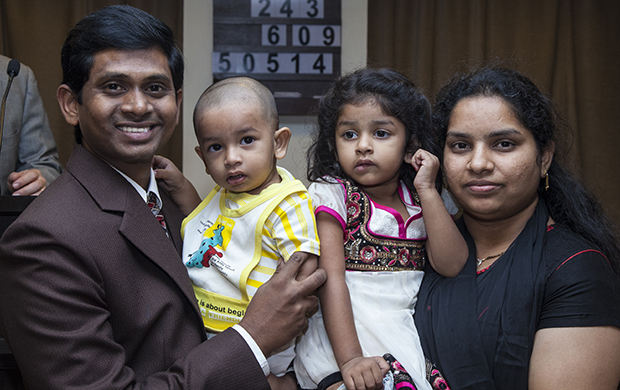 Elder Rasband concluded his visit to India with a stop in Mumbai, where he presided over a member meeting of the Mumbai Branch and held a memorable district meeting with the four missionaries assigned to the sprawling city. 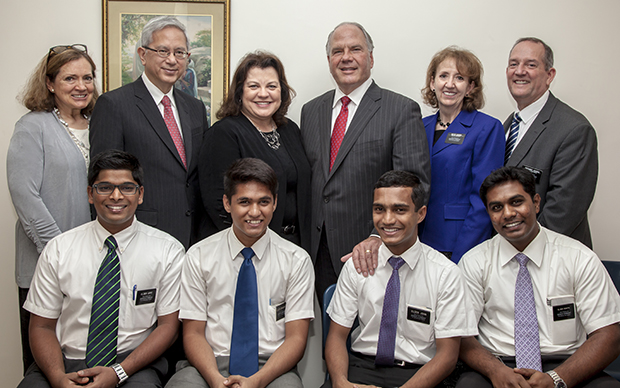 He encouraged the young elders to envision the gospel’s potential in Mumbai and throughout India. “The missionaries,” he told them, “are pioneers ushering in the beginnings of the Church in a democratic nation of over a billion people.”

He counseled the missionaries to obey the mission rules and always remember that they are the Lord’s representatives of the Church in Mumbai.

“The opportunities for the gospel in India,” he said, “are immense.” 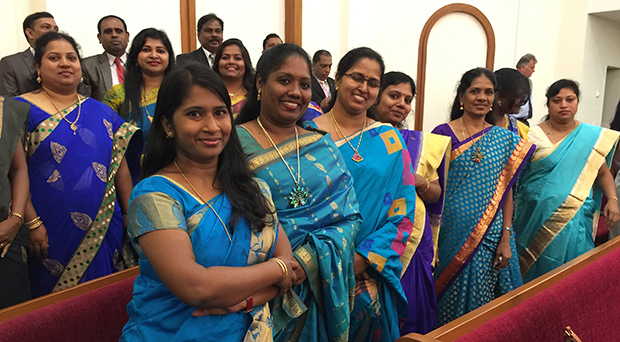 Indian members gather for a meeting to organize India's second stake, the Bangalore India Stake. The stake was organized by Elder Ronald A. Rasband on November 15. Photo by Melanie Rasband.

Elder Rasband and Sister Rasband traveled to Pakistan on November 19. As in India, they witnessed a nation writing its maiden chapters of local Church history.

Elder Dallin H. Oaks of the Quorum of the Twelve Apostles dedicated the country in 2007, when there were 2,000 members serving in seven branches. Today there are 4,000 members, 13 branches, and three districts.

Elder Rasband’s time in the capital city of Islamabad included meetings with members, missionaries, and a variety of civic leaders.

“We had very good meetings with government officials,” he said. “They were welcoming, gracious, and outgoing, and they showed us great respect. They know us and they know of the humanitarian relief that the Church has provided Pakistan after floods and other natural disasters.”

The Pakistani officials “thanked us for being there and said they hoped we would become a successful minority religion in Pakistan. They want us to grow and prosper.”

A prominent daily newspaper in Islamabad filed a story about the Church leaders’ meetings with the Pakistani foreign ministry officials. At a November 21 missionary zone conference, Elder Rasband held up a copy of the story and encouraged the missionaries to treasure their faith and their sacred calling. “Be bold,” he added, and capture the vision of the future of the Church in Pakistan. 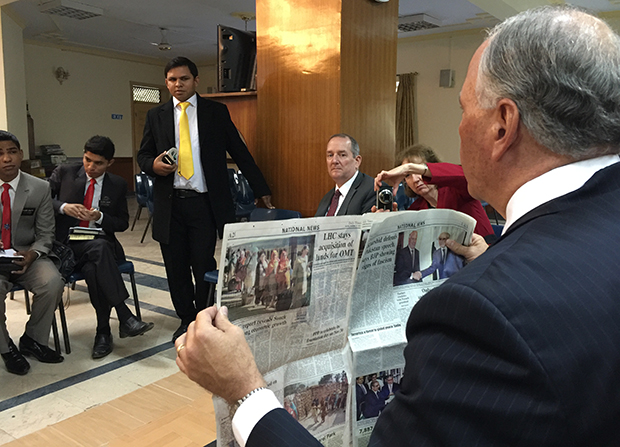 During a meeting with missionaries in Islamabad, Pakistan, Elder Ronald A. Rasband holds up a copy of a local newspaper story covering his visit with Pakistani government officials. Photo by Melanie Rasband.

At a Sabbath day member meeting, Elder Rasband promised the Pakistani Latter-day Saints that future generations will honor their faith and gospel devotion.

“I told them that it’s always harder for the first generation—but it would be worth it.” Elder Rasband said members worldwide could learn much from the Indian and Pakistani members. They focus on the gospel’s essential principles: faith, repentance, baptism, and the gift and influence of the Holy Ghost. They are unified.

“The Lord, as prophesied, is able ‘to do [His] own work’ in India and Pakistan,” said Elder Rasband. 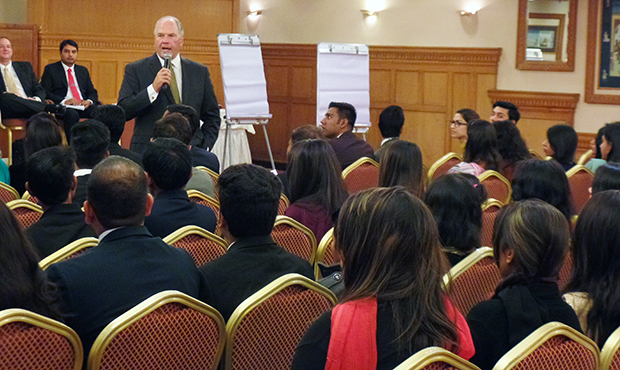 Elder Ronald A. Rasband speaks to members during a district conference in Pakistan.