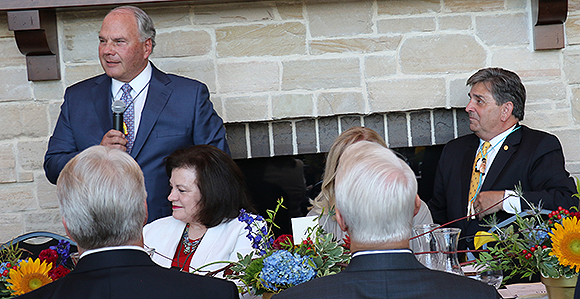 Elder Ronald A. Rasband speaks at a gala, celebrating the 106-year relationship between the BSA and The Church of Jesus Christ of Latter-day Saints, in the Hale Centre Theatre on Tuesday, September 3, 2019. Photo by Jason Swensen.

While reflecting Tuesday, September 3, upon the upcoming separation between The Church of Jesus Christ of Latter-day Saints and the Boy Scouts of America, Elder Ronald A. Rasband fought back a moment of emotion.

Like so many other Latter-day Saints who have worn the Scout uniform or led a group of deacons on an overnight Scout camp or perhaps worked hard to finish that final merit badge, he’s experiencing a mixture of feelings about the future changes.

During a small dinner prior to a Tuesday gala at the Hale Centre Theatre, celebrating the 106-year-old relationship between the Church and the BSA, Elder Rasband expressed gratitude “for my Troop 95 in the Cottonwood Stake” and “for my mother, who helped me get all those awards.”

A member of the Quorum of the Twelve Apostles, and the Church’s Chief Scouter, Elder Rasband represented the Church at an event that was defined by thanks and mutual admiration between two organizations committed to lifting young people.

He saluted the multilevel leadership of the Boy Scouts of America for the cooperation and friendship demonstrated throughout the separation process—including Scouting’s Chief Scout Executive, Michael Surbaugh, who also spoke at Tuesday’s gala dinner.

The First Presidency and the Quorum of the Twelve Apostles, said Elder Rasband, “send their deepest appreciation and gratitude for the kindness, the dignity, the professionalism, and the kindhearted caring that this separation now will achieve.”

The Church and Scouting have a storied partnership.

On May 3, 1913, Chief Scout Executive James E. West mailed a brief letter to Church headquarters that would impact Latter-day Saint young men living in the United States for generations.

“It gives me great pleasure as an executive of the Boy Scouts of America,” he wrote, “to welcome through you all of those who will actively take up Scout work.”

With that, a partnership between Scouting and the Church was forged that lasted more than a century. In time, the Church would become the largest chartered organization of the BSA.

In May of 2018, the Church announced it was ending its relationship with Scouting.

“In this century of shared experience, the Church has grown from a U.S.-centered institution to a worldwide organization, with a majority of its membership living outside the United States,” a joint statement from the Church and BSA said. “That trend is accelerating. The Church has increasingly felt the need to create and implement a uniform youth leadership and development program that serves its members globally. In so doing, it will be necessary for the Church to discontinue its role as a chartered partner with BSA.”

Starting in January 2020, the Church is rolling out a global Children and Youth initiative to replace Boy Scouts and Personal Progress in its Young Women program.

Elder Rasband acknowledged that the relationship between Scouting and the Church has navigated “easier waters” than those experienced over the past couple of years.

“But I want you all to know, as we negotiated the separation and disengagement with Scouting, that there could not have been a finer man who I could have dealt with than Mike Surbaugh and his team,” he said. “The relationship has been nonconfrontational. It has been amicable. It has been honest in representing each entity’s wishes and needs.”

Elder Rasband concluded, saying, “We want to thank the national [Scouting] organization for being such wonderful partners to The Church of Jesus Christ of Latter-day Saints.”

Surbaugh said integrity has defined his relationship with Elder Rasband and other Church leaders during the separation process.

“Thank you for treating us with trust and integrity. And thank you for giving us a chance to set the stage for a different but renewed relationship,” he said.

The Scout executive said he met a Latter-day Saint for the first time 42 years ago as a 16-year-old. The Church member, who was serving in a Church calling as a Scoutmaster,  would become a key mentor to young Michael Surbaugh and play a key role in his choice to pursue a career as a Scouting professional.

In like manner, the Church has been more than simply partners with Scouting, he added. Through countless members and volunteers like that generous Scoutmaster and mentor, the Church has transformed Scouting.

Surbaugh said the relationship that he and Scouting enjoy with Church leaders such as Elder Rasband “will continue to enrich our lives.” He added that he continues to be inspired by the work the Church performs to lift the lives of many outside the faith.

Tuesday’s dinner was emceed by Tim Fenton, the president of BSA’s Great Salt Lake Council. He presented Elder Rasband with a gift to the Church from the council—a framed memento that included a 1913 American flag and the inscription “Celebrating and thanking The Church of Jesus Christ of Latter-day Saints for a wonderful 106-year partnership.”

He also thanked the Hale Centre Theatre for helping stage the celebration event. 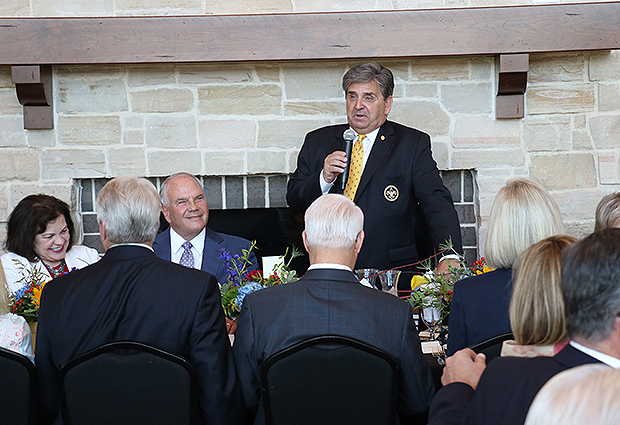 Great Salt Lake Council president Tim Fenton speaks about the history of Boy Scouts and the partnership BSA has had with The Church of Jesus Christ of Latter-day Saints, during a gala held in Hale Centre Theatre on September 3, 2019. Photo by Jason Swensen.