Elder Oaks Visits the Philippines: the Land of Smiles amid Trials 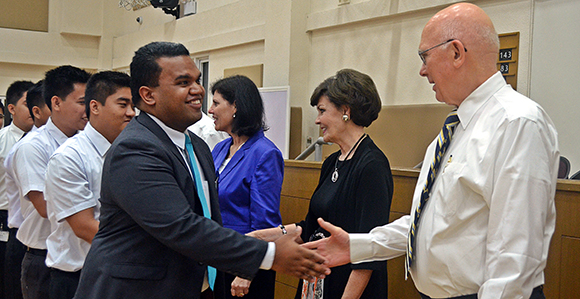 Elder Dallin H. Oaks and his wife, Sister Kristen Oaks, shake hands during “a very sweet assignment” to the Philippines October 23-November 1. In addition to addressing some 30,767 members during a broadcast, visiting General Authorities met with more than 8,000 members in stake conferences, devotionals, and leadership meetings in several cities throughout Luzon, as well as in Cebu and Tacloban.

“The restored gospel has found a very fertile field in the Philippines. We still have problems, but they are being addressed by capable leaders and faithful members.“ —Elder Dallin H. Oaks of the Quorum of the Twelve

On his first visit to the Philippines nearly 30 years ago, Elder Dallin H. Oaks met with the 33 stake presidents serving in that nation. Church membership there stood at about 100,000. From October 23 to November 1, Elder Oaks again visited the area and met with local members and leaders.

Today, there are 91 stake presidents and a nationwide membership of more than 700,000. Also, the Philippines has 21 missions, 81 districts, and 1,106 wards and branches.

Over the years, Elder Oaks has had more than 15 assigned trips to the Philippines. Also, from 2002-2004, he and his wife, Sister Kristen M. Oaks, lived there as he presided over the Philippines Area of the Church. As they prepared to leave the Philippines a decade ago, he addressed members throughout the nation via a satellite broadcast. In his parting message, he noted that the year 2004 marked the 20th anniversary of the Manila Philippines Temple. In celebration of that event, he asked members to qualify for temple recommends in greater numbers and to go more frequently to worship in the temple.

On November 1, Elder Oaks delivered another address to the members, which was broadcast to 173 locations throughout the Philippines. “Now it is the 30th anniversary of the Manila temple and for several years we have had a second temple in Cebu, and a third temple has been announced for Northern Luzon,” Elder Oaks said. “I repeat that request ‘to qualify for temple recommends in greater numbers and to come more frequently to worship in the temple.’ ”

Elder Lynn G. Robbins of the Presidency of the Seventy; Bishop Gérald Caussé, first counselor in the Presiding Bishopric; and Sister Oaks also spoke during the broadcast.

In addition to addressing some 30,767 members during the broadcast, the visiting General Authorities met face to face with more than 8,000 members in stake conferences, devotionals, and leadership meetings in several cities throughout Luzon, as well as in Cebu and Tacloban. They were accompanied by two members of the Seventy who serve in the Philippines Area Presidency: Elder Ian S. Arden, president; and Elder Shayne M. Bowen, first counselor.

In a conversation with the Church News, Elder Oaks said, “There is no more loyal and loving people than the Philippine people. They are also survivors. They have in the Philippines every kind of tragedy that occurs on the face of the earth: poverty, famine, hurricanes, volcanic eruptions, earthquakes, tidal waves and, in their history, they have been colonized and conquered by foreign powers. They’ve endured all of that, and yet they are cheerful, optimistic, and loving. They are friendly. It seems to be a cultural characteristic. Every person you meet in a hotel or shopping center or anywhere smiles at you like they’ve known you all their life and they’re your best friend.

“The Church in the Philippines has progressed since 1961, when President Gordon B. Hinckley dedicated the land, from one member to over 700,000. That growth over 53 years is a record unmatched anywhere in the world. The restored gospel has found a very fertile field in the Philippines. We still have problems, but they are being addressed by capable leaders and faithful members.”

Elder Oaks said that the two years he served as the area president was “a very sweet assignment. Any time we have a chance to go back, we love to do it.”

Of her return visit to the Philippines, Sister Oaks said, “There is so much spirituality there. This nation loves the Savior Jesus Christ.”

She spoke of a cultural presentation at the missionary training center by 450 young people who were dressed to represent many of the regions of the Philippines. “They are so proud of their nation,” Sister Oaks said.

“It was such a blessing to see friends and members we worked with a decade ago. We witnessed their continued faithfulness, their commitment to good things, and their desire to do what is right.

“They are always very grateful for all they receive. They are such a happy people because they have mastered the virtue of gratitude. We felt surrounded by love and good cheer and welcome every minute we were there.”

Sister Oaks, Sister Valérie B. Caussé, and Sister Jan N. Robbins spoke at a meeting with the sisters in the Philippines, whom she described as “exceptional women of faith. They wish to serve Heavenly Father with all their hearts. In my opinion, they have an innate love of the Lord.”

She said that before they left for the Philippines, she told Sister Caussé and Sister Robbins to “prepare to feel an immense outpouring of love.” She said they both mentioned that they had felt it.

“I am sure Sister Caussé and Sister Robbins join me in telling you how tender and loving these people are.”

Elder Oaks said that his address in the satellite broadcast counseled members pertaining to such matters as:

• Strengthening the Church in the Philippines.

• Adopting the gospel culture—which is “a unique set of values and practices based on the plan of salvation, the commandments of God and the teachings of the living prophets”—while retaining parts of the national and ethnic culture that are in harmony with it and abandoning those parts that are not.

• Being full tithe payers, fasting and paying fast offerings that care for the poor and needy, and following a high standard of work. He expressed some concerns, one of which is the high number of households in which the father or mother leave home to work abroad.

Elder Oaks addressed some of his remarks to the young people, cautioning that they live in a world that has many influences that can draw them away from the path of growth Heavenly Father has prescribed for them.

“Fortify yourselves from destructive actions. … Choose friends and associates who will not tear you down but will encourage you in actions that will build you up and help you go forward on the path of growth,” he told them.

He urged them to plan and save for their future, including sacrificing and doing all they can to support themselves as missionaries before receiving help from the missionary fund.

“Marriage in the temple is part of the Lord’s plan for His children and for mature young people it should not take second place to other goals. Marriage should take its place beside those other goals—not behind them.”

Elder Oaks said that when he first arrived in the Philippines 30 years ago, “a challenge of the Spirit of the Lord whispered to my soul.” He referred to Mosiah 4:10, in which King Benjamin told his people, “And now, if you believe all these things see that ye do them.”

Elder Robbins, reflecting on his first visit to the Philippines, said, “The Philippines is what I would call the land of beautiful smiles—people seemed so happy and anxious to please. Because they are so humble and happy they are easy to love,” he said of his first impression of the nation. This was his and Bishop Caussé’s first trip to the Philippines.

“Although a small percentage of the population doesn’t speak English, everyone uses English scriptures in church,” Elder Robbins said. “All meetings were held in English with a little Tagalog spoken here and there, but even the local Area Seventies said the language trends in the Philippines are leaning more and more toward English all the time. Because there are over 100 different languages and dialects spoken in the Philippines, English is the language that is uniting them. In the Philippines the prophecy of the gospel being taken to every people and tongue, is being fulfilled in English.”

Elder Robbins said that in addition to the messages one might expect to be shared, like building faith in Jesus Christ and strengthening home and family, self-reliance was a major focus of the trip.

“Creating a self-reliant Church has to begin by deeply imbedding the doctrine of self-reliance in the hearts of the members,” he said.

Bishop Caussé, in a conversation with the Church News, spoke of the self-reliance he witnessed as he visited Tacloban, which was devastated November 8, 2013, by Super Typhoon Haiyan that left some 8,000 people dead.

“I spent a day with Elder Bowen of the area presidency in Tacloban, the city most affected by Haiyan, or Typhoon Yolanda as it is called in the Philippines. Tacloban has been the center of the rescue and rebuilding efforts of the Church since the typhoon hit a year ago.

“Soon after the typhoon, the Church organized with the area presidency an emergency response plan that was approved by the First Presidency. Besides the normal rescue effort providing food and emergency supplies to the population, we’ve been rebuilding. We had 3,210 LDS families who lost their homes in the typhoon. Members rebuilt 3,210 homes in just three and half months.

“The Church provided training in carpentry. By building the homes the members had the sense of self-reliance. When they have helped to build 10 other members’ homes, they receive a carpenter’s certificate. We have 600 members of the Church who have received the certificate, which qualifies them for applying for jobs as carpenters. There is a reputation in Tacloban of Mormon carpenters, who are hard workers with good principles. They are happy in the overall rebuilding effort. Most of them have found jobs and are participating in this effort. The Church has also helped through the Perpetual Education Fund with professional or vocational training so they will be able to secure jobs for their families and become self-reliant. I had the opportunity while in Tacloban to visit a technical school where 800 members are being trained, another 160 have graduated.”

Bishop Caussé said that what was a disaster has been transformed into blessings for many families on the road to self-reliance.

“This happened only because of the priesthood leaders and Relief Society sisters working together for the members. I saw a lot of faith and excitement, a lot of humility. I was deeply impressed by those members of the Church who have lost everything and are keeping faith. We’ve seen a lot of members who were less active going back to activity, a lot of baptisms as a result of this effort and all members uniting together to overcome this tragedy and rebuilding their lives.”