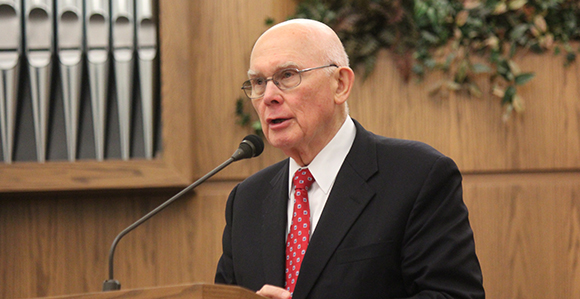 Elder Dallin H. Oaks of the Quorum of the Twelve Apostles urged all Church members January 21 to take a stand in defense of religious freedom.

Urging all Church members to take a stand in defense of religious freedom, Elder Dallin H. Oaks of the Quorum of the Twelve Apostles and other Church officials addressed more than 1,100 people at the Tempe Institute of Religion at Arizona State University on January 21. Over 11,000 more, age 16 and older, viewed a live broadcast of the event at 81 stake centers in Arizona.

“The leadership and membership of the Church of Jesus Christ are irrevocably committed to the principle and preservation of religious freedom because it is necessary for the divine plan for mortals to exercise their agency to make the choices necessary to progress toward eternal life,” said Elder Oaks. “In furtherance of what we believe to be the inspiration of God, our national and state constitutions guarantee the free exercise of religion by forbidding government laws or actions to restrict it.”

He explained that core principles of Church doctrine, such as those identified in “The Family: A Proclamation to the World,” are divinely given doctrine of the restored Church and cannot be changed.

“The most important Church doctrine being currently attacked is our practice and reliance on the traditional man-woman marriage and family,” Elder Oaks said. “The family proclamation begins with the declaration that ‘marriage between a man and a woman is ordained of God and that the family is central to the Creator’s plan for the eternal destiny of His children.’”

He said when the proclamation was presented by President Gordon B. Hinckley in 1995, many Church members questioned why such an official pronouncement of commonly accepted beliefs was necessary. Today, “we see the hand of the Lord in identifying our doctrine in clear terms,” Elder Oaks said.

“There are many political, legal, and social pressures for changes that deemphasize the importance or change the definition of marriage, confuse gender, or homogenize the differences between men and women that are essential to accomplish God’s great plan,” he said. “Our eternal perspective sets us against such changes.”

Elder Keetch, who conducted the meeting, said the purpose of the Religious Freedom Conference was to assist Church members in understanding the role they can and should play in defense of basic constitutional rights.

“Religious freedom is definitely under fire,” he said. “There will be serious challenges ahead.”

“We should stand where we are and do the very best we can when a religious liberty fire erupts,” he said, referring to a story he told of a volunteer firefighter who left his post briefly and returned to a raging fire in a building he was assigned to protect.

Elder Wickman spoke of the creation of the U.S. Constitution by those who labored extensively to form “a more perfect union.”

“It was a product of hard work,” he said. “It requires us to do hard work as citizens to protect it.”

“We’ve left too much to the courts,” he said. “‘We the people’ must do the hard work in defense of religious freedom ‘in order to form a more perfect union’ today.”

There was also a presentation by two religious liberty lawyers, Hannah Smith and Alexander Dushku. They showed the Church’s new web page, religiousfreedom.ChurchofJesusChrist.org, which features videos and information that defines religious freedom and what can be done to protect it.

For example, under “Get Involved” at the top right of the web page are “10 Ways to Protect Religious Freedom” and “Seven Keys to Successful Conversations.”

Under “Examples” are videos and information on “Everyday Conversations: Creating Mutual Respect in Heated Conversations” and “Religion in Public Schools: 7 Religious Things You Can Still Do.”

Under the FAQs section, answers to important and current questions can be found, such as “Isn’t protecting religious freedom just an excuse for discrimination?” and “Won’t people call me a bigot if I don’t support their beliefs?” 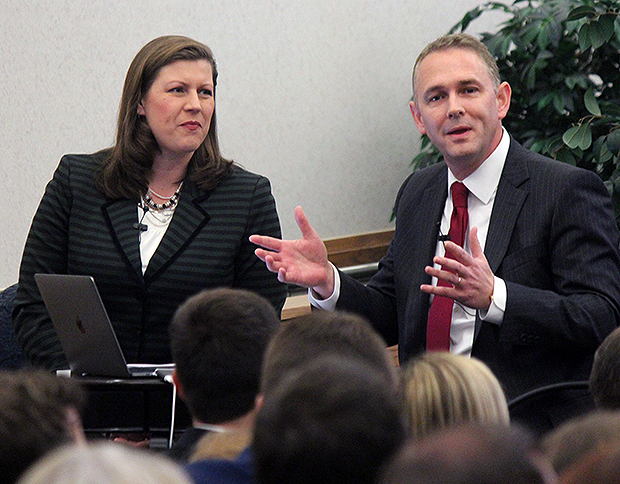 The presenters also took questions submitted by audience members and talked about how to speak up with courage and civility.

“One of the most important things you can do is to be an example of the believers,” Sister Smith said.

She also recognized members of other faiths who were in the audience and pointed out a doctrinal perspective from Church history when the Prophet Joseph Smith said that he was just as willing to die in defending the rights of a Presbyterian, a Baptist, or a good person of any denomination because he realized that the same principles that would trample upon the rights of those other faiths would be used to trample on the rights of Church members.

Joseph Smith said, “It is a love of liberty which inspires my soul—civil and religious liberty to the whole of the human race.”

She also quoted the Church’s eleventh article of faith: “We claim the privilege of worshiping Almighty God according to the dictates of our own conscience, and allow all men the same privilege, let them worship how, where, or what they may.”

“I hope, as members of the Church,” she said, “we would be the first to stand up for religious freedom for all people.”

Those participating in the conference reminded audience members of the need for civility and understanding when discussing and defending religious freedom and dearly held personal beliefs.

“Whatever our differences, most of us want to live together in happiness and harmony, with goodwill toward all,” he said. “We want effective ways to resolve differences without anger or contention and with mutual understanding and accommodation. We all lose in an atmosphere of hostility or contention. We should encourage all to refrain from the common practice of labeling adversaries with such epithets as ‘godless’ or ‘bigot.’ We all lose when debates on ideas and policies turn into personal attacks, boycotts, firings, and other intimidation of adversaries.”

He added, “To achieve these goals, we must have mutual respect and Christian love toward others whose beliefs, values, and behaviors differ from our own.” 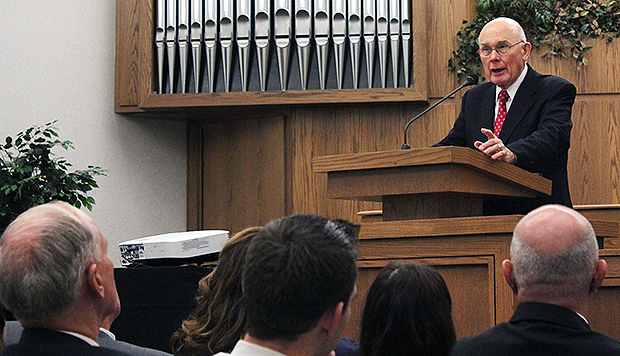 Elder Dallin H. Oaks of the Quorum of the Twelve Apostles addresses more than 1,100 in attendance at the Tempe Institute of Religion at Arizona State University January 21, and thousands more at 81 stake centers in Arizona. Photo by Scott P. Adair.

Dr. Jaswant Singh Sachdev, who represents the Sikh religion on the Arizona Interfaith Movement, was one of many belonging to other religions who attend the conference. He said after the meeting that it was one of the best conferences of its kind that he had attended and he would like to see more of them to help people better understand each other’s beliefs.

He said he was taking away that thought shared by Elder Oaks when he used the metaphor of a two-sided coin: “Love of others and tolerance for their opinions and behavior is only one side of a two-sided coin,” Elder Oaks said. “The other side is always what is true or right. One of these sides cannot govern without consciousness of the other. Those who question why the Church does something they consider contrary to love overlook the companion requirement of truth.”

Dr. Sachdev said of the message, “I believe we can find ways to live in harmony.” 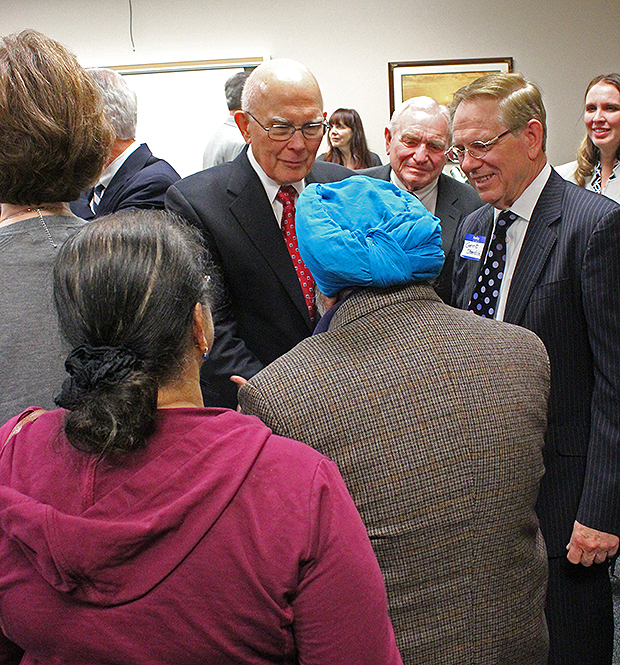 Elder Dallin H. Oaks of the Quorum of the Twelve Apostles greets special guests in a reception following a conference on religious freedom in Tempe, Arizona, January 21. Photo by Scott P. Adair. 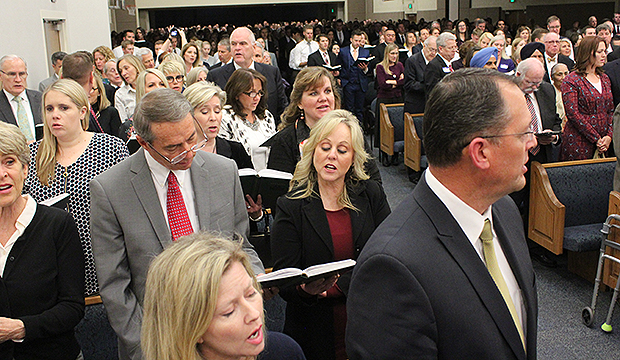 More than 1,100 were in attendance at the Tempe Institute of Religion at Arizona State University January 21, and thousands more, ages 16 and older, viewed a live broadcast of the religious freedom event at 81 stake centers in Arizona. Photo by Scott P. Adair.