Elder Oaks Tells Graduates to “Push Back” Against World’s Evils 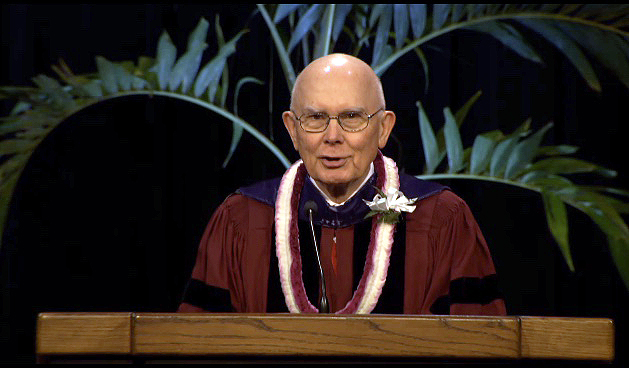 “Push back against the worldly prejudices that preach hate or hostility toward other nations, ethnic groups, or even political parties. … Followers of Christ should be examples of civility.” —Elder Dallin H. Oaks of the Quorum of the Twelve Apostles           Busath.com

“Push back against worldly values and practices that are contrary to gospel teachings and covenants,” Elder Dallin H. Oaks of the Quorum of the Twelve Apostles told graduates during commencement exercises at Brigham Young University–Hawaii on February 25.

“By pushing against ‘the world’ I obviously do not mean all that the world has to offer in modern conveniences, prosperity, and security,” Elder Oaks said. “When I say ‘push back against the world,’ I mean push back against that part of the world’s values and practices that draw us away from the Lord’s teachings and our covenant obligations.”

Push back against rising tide of evil

Drawing upon warnings from the Lord found in the scriptures as well as from prophets, Elder Oaks encouraged listeners to “lay aside the things of this world, and seek for the things of a better” (D&C 25:10).

“The cares and temptations of the world are very real to all, especially to those who have accepted the doctrines and made the covenants of the restored gospel,” he said. “Prophetic teachings often run counter to the popular ideas and prejudices of the world.”

Church members must, therefore, take special care to avoid the mistake of rejecting “the word and the way of the Lord” because of fear of persecution and the cares of the world.

“These are challenging times, filled with big worries: wars and rumors of wars, possible epidemics of infectious diseases, droughts, floods, and global warming,” he said. “Seacoast cities are concerned with the rising level of the ocean, which will bring ocean tides to their doorsteps or over their thresholds. Global warming is also affecting agriculture and wildlife. Nations whose prosperity depends on world peace and free trade worry about disturbing developments that threaten either or both of these.”

But as serious as all of those things are, Elder Oaks told listeners, “we must worry just as much about the rising tide of evil in the world around us.”

Recognizing some in the audience may feel isolated from the physical and political threats in the world, Elder Oaks pointed out that all are surrounded by evil in literature, music, movies, and videos; on the internet; in their schools; and in the marketplace.

“We cannot change the evil influences that surround and press upon us and our families, but we can increase our power to deal with them as we push back against the world,” he said. “We must try to carve out personal islands of purity and serenity and strengthen our barriers against the forces that besiege us in these protected spaces.”

Following the Lord’s way is not easy, Elder Oaks taught. He shared a few effective ways a person is able to go forward with faith and push back against the world.

One way, he said, is through observing the Sabbath day in an appropriate, positive way. “Properly observed, the Sabbath will help us and our families develop the spiritual strength we need to stand firm against temptation and to stay unspotted from the world.”

Avoid contention, love others, and be examples of civility

Another way to push back against the world, he said, “is to stand clear from the current atmosphere of hate and to refrain from participating in the contentious communications that are so common today.” 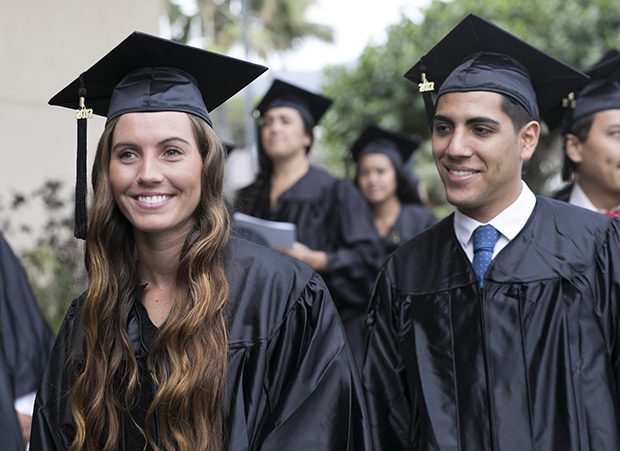 Modern technology fosters conflicts by expanding the audience and speed of dissemination, making it possible for careless charges, false representations, and “ugly innuendos” to be instantly flashed around the world. This widens and intensifies the distance between different parties and positions.

“I am not referring to difference in policies, which need to be debated publicly, but to the current ugliness and personal meanness of the communications,” he said. “Don’t be part of such communications. As followers of Christ we know that all of the inhabitants of this earth are children of God. Use that knowledge to push back against the worldly prejudices that preach hate or hostility toward other nations, ethnic groups, or even political parties. … Followers of Christ should be examples of civility.”

It is important to follow the Savior’s teaching to “love one to another,” the Apostle taught. 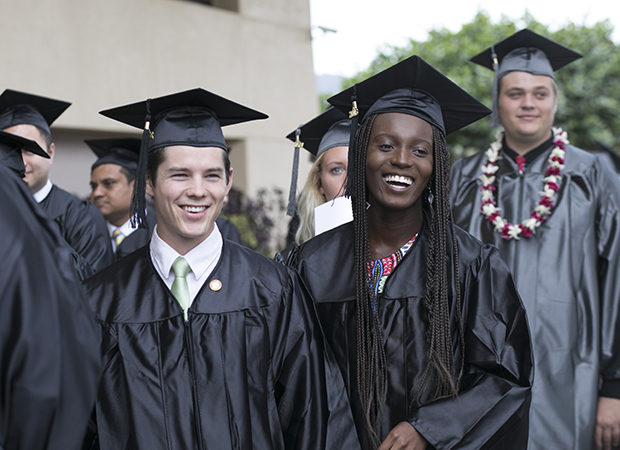 “Of course this counsel to love, to avoid contention, and to be examples of civility is not meant to discourage us from participating in discussions, debates, and even taking adversarial positions against what we believe to be wrong or inadvisable,” he said. “Within the limits of our own resources of time and influence we should take a position, make it known, and in a respectful way attempt to persuade others of its merit, at least for us. Positive action is essential to our responsibility to push back against the world.”

Elder Oaks spoke of pushing back against incomplete and inaccurate portrayals of histories and people, using religious influences and motivations in public schools as an example.

“Under the banner of Jesus Christ, we should also go forward in coalitions of like-minded persons to protect and advance the strength of our precious freedoms of speech, conscience, and the free exercise of religion,” he said. 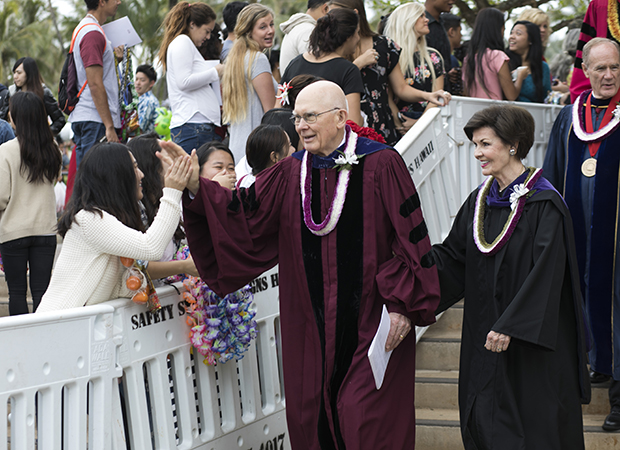 Elder Oaks said yielding to the enticing of Satan may bring pleasure for a season but it will never bring lasting happiness or eternal joy. “Over time, yielding to the influences of Satan will only halt eternal progress and bring feelings of darkness, anger, hate, and misery.” 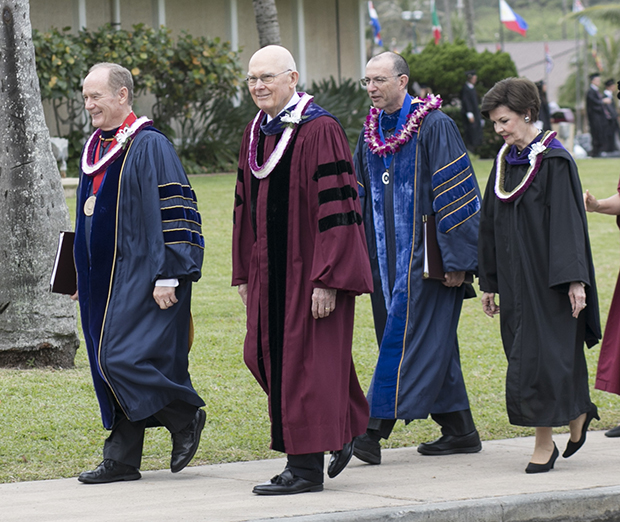 President John S. Tanner and Elder Dallin H. Oaks of the Quorum of the Twelve Apostles lead the procession prior to commencement exercise on February 25. Photo by Monique Saenz, BYU Photo.

Elder Oaks spoke against the dangers of some elements of national, ethnic, and even family cultures that come from traditions and practices of men.

“When the practices of these cultures are contrary to gospel covenants and culture, we must push back and separate ourselves from them,” he said. “We must do this with cultural practices that accommodate dishonesty or dependency or tolerate sexual relations outside marriage.” 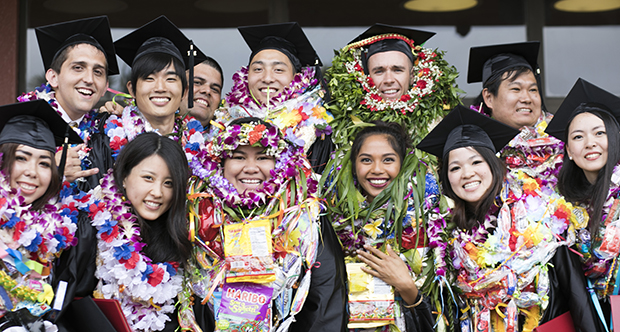 The Apostle warned graduates of becoming part of the culture of dependency and the “me generation.”

“We should also push back against the worldly practice that has been described as the culture of dependency—the expectation that the extended family or the community or the government will provide what you desire with a minimum of effort on your part,” he said. “As required by the spiritual growth that is the purpose of the plan of salvation, the gospel teaching of self-reliance pushes back against the idea or culture of dependency.”

Speaking of the worldly attitude of “what’s in it for me,” Elder Oaks encouraged graduates to cooperate and even sacrifice for the benefit of a larger community. 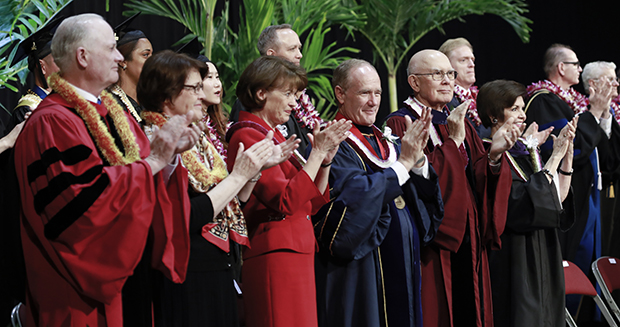 Just as much of the world is cleaning up the physical environment from pollution, so is the need to clean up the current moral environment. Pushing back on moral pollutions—pornography, language that pollutes public communications with profanity, vulgarity, and morally degrading coarseness—is necessary in today’s world.

Urging graduates to practice “one worldly value that is consistent with the gospel culture,” Elder Oaks spoke of the importance of lifelong learning.

“Beyond increasing our occupational qualifications, we should desire to learn how to become more emotionally fulfilled, more skilled in our personal relationships, and better parents and citizens,” he said. “There are few things more fulfilling and fun than learning something new. Greater happiness, satisfaction, and even temporal rewards come from this. Our education should not be limited to formal study.”

Elder Clark spoke on the topic “Let the affections of thy heart be placed upon the Lord forever” and encouraged listeners to avoid taking the blessings of the Lord for granted.

Elder Clark shared the counsel Alma gave to his son Helaman found in the Book of Mormon in Alma 37:37 when he told him to “counsel with the Lord in all thy doings, and he will direct thee for good,” and encouraged listeners to memorize and make that counsel a standard for their lives.

“This is a very high standard, but it comes with the promise of divine love and divine power,” he said. “And so I say to you, go forward, unafraid, and seek to meet this standard with the love and power of Jesus Christ in your life.”

During the event held on the Laie, Hawaii, campus, BYU–Hawaii awarded 256 degrees—204 bachelor’s degrees and 52 associate degrees—to students from 29 countries. The oldest graduate is 53.