Elder Oaks Pleads for Increased Concern for the Rising Generation 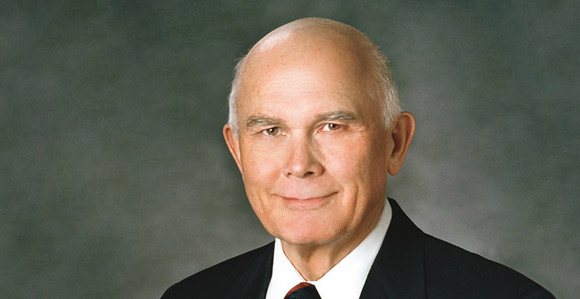 “Children need the emotional and personal strength that comes from being raised by two parents who are united in their marriage and their goals.” —Elder Dallin H. Oaks of the Quorum of the Twelve Apostles

Saturday afternoon, Elder Dallin H. Oaks of the Quorum of the Twelve declared the importance of protecting and caring for the world’s children. All are under the Savior’s command to love and care for each other—and especially for the weak and defenseless, he said.

“Children are highly vulnerable,” he said. “They have little or no power to protect or provide for themselves, and little influence on so much that is vital to their well-being. Children need others to speak for them, and they need decision-makers who put their well-being ahead of selfish adult interests.”

The apostle said it is shocking to consider the millions of children victimized by evil adult crimes and selfishness. Children in some war-torn countries are abducted to serve as soldiers in contending armies, while nearly 2 million children are victimized each year through prostitution and pornography.

“From the perspective of the Plan of Salvation, one of the most serious abuses of children is to deny them birth,” he said. “This is a worldwide trend. The national birthrate in the United States is the lowest in 25 years, and the birthrates in most European and Asian countries have been below replacement levels for many years. This is not just a religious issue. As rising generations diminish in numbers, cultures and even nations are hollowed out and eventually disappear.”

He noted that worldwide there are an estimated 40 million abortions per year. “Many laws permit or even promote abortion, but to us this is a great evil,” Elder Oaks said.

Fetal impairments resulting from a mother’s inadequate nutrition or drug use during pregnancy are among other abuses.

“There is a tragic irony in the multitude of children eliminated or injured before birth while throngs of infertile couples long for and seek babies to adopt,” he said.

Many children are jeopardized by disease, hunger and poverty, he said; even in rich nations children are impaired by neglect, often by their parents. He noted that children growing up in poverty have inferior health care and inadequate educational opportunities.

He said psychological abuse should be counted among the dangers from which children should be protected. “Parents or other caregivers or teachers or peers who demean, bully or humiliate children or youth can inflict harm more permanent than physical injury. Making a child or youth feel worthless, unloved or unwanted can inflict serious and long-lasting injury on his or her emotional well-being and development. Young people struggling with any exceptional condition, including same-gender attraction, are particularly vulnerable and need loving understanding, not bullying or ostracism.”

Elder Oaks spoke of the value of children being raised in a home where the mother and father are both present and married. There are surely cases when a divorce is necessary for the good of the children, but such circumstances are exceptional, he observed. “Children need the emotional and personal strength that comes from being raised by two parents who are united in their marriage and their goals.”

Evidence, he added, indicates that children are at a “significant disadvantage” when raised by single or unmarried parents. “We should assume the same disadvantages for children raised by couples of the same gender.”