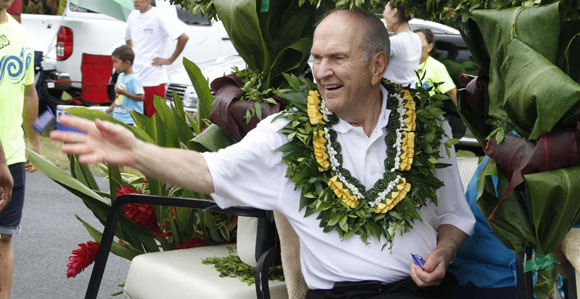 Elder Russell M. Nelson, with Sister Wendy Nelson, throws candy as he rides as grand marshal in the commemorative parade in Laie.

The object of the Polynesian Cultural Center is to assist young people with their education costs, but it brings the attendant blessing of promoting love, peace, and fellowship among people of disparate cultures, Elder Russell M. Nelson of the Quorum of the Twelve said.

Elder Nelson visited the center and its adjacent Brigham Young University–Hawaii campus September 6–8, where he took part in 50th anniversary commemorative activities for the center, served as a parade grand marshal, dedicated the new Heber J. Grant Building on campus, and spoke at a Church Educational System devotional.

Commenting between shows while touring the center, Elder Nelson said, “For these young people, to get an education and not be in debt is a very, very liberating thing. But even more than that, they learn to live in peace with one another.”

In times past, some of the island cultures represented at the center have been at war with one another, Elder Nelson observed. “So, you look behind this, and you see this as a way toward international peace, love of God, love of their membership in the Church. They rejoice in their fellowship with one another as members of the Church.”

In a later interview, Elder Nelson noted that when the Polynesian Cultural Center began 50 years ago, its focus was on the islands of the Pacific.

“That still is the dominant theme, but now we’ve reached out to the young people of Asia,” he said, adding that he had that weekend met young people from the People’s Republic of China, Taiwan, Hong Kong, and Japan.

He spoke of the Church’s rich heritage in the islands, beginning with President Joseph F. Smith, who served a mission there at age 16 and was nursed from sickness to health by a Hawaiian “mama.” It continued with President Heber J. Grant, who dedicated the temple at Laie, and with later Church Presidents, some of whom Elder Nelson has been with as they’ve visited the islands.

“I know how they could sense the realization of the teachings of the Book of Mormon that state the promise to gather scattered Israel would focus on the people of the islands of the sea,” he said. “So it is sacred soil, and the people who are here are foreordained and fore-determined for their lofty purpose in building up the Church in this part of the world, and that extends to the other nations of the world.”

Told they are young people of promise “feels good to them,” Elder Nelson observed. “They will return to their own countries and bless the lives of their own families, their own people.”