Contributed By From Mormon Newsroom 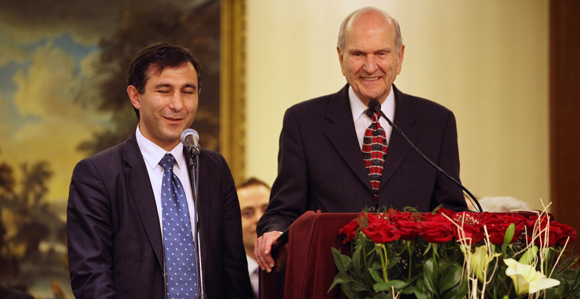 Varuzhan Poghosyan (left) translates for Elder Russell M. Nelson as he creates the first stake of the Church in Yerevan, Armenia. © 2013 by Intellectual Reserve, Inc. All rights reserved.

“The spirit of Christianity has been in Armenia a long time.” —Russell M. Nelson of the Quorum of the Twelve

The Church of Jesus Christ of Latter-day Saints has created the first stake in the Republic of Armenia.

Elder Russell M. Nelson of the Church’s Quorum of the Twelve Apostles was joined by Elder Per G. Malm and Elder Araik Minasyan of the Seventy to form the stake in a special meeting with members and newly called local leaders in the capital city of Yerevan Sunday, June 16, 2013.

The long road to official government recognition of the Church to exist in Armenia, then part of the Soviet Union, began in the mid-1980s.

The Republic of Armenia declared independence from the Soviet Union in 1990. A year later the Soviet Union was dissolved, and in 1992 two people were baptized as the first members of the Church in the newly formed country.

“This is a Christian nation,” explained Elder Nelson. “The spirit of Christianity has been in Armenia a long time. Our relationship with the government is outstanding.”

The new stake in Armenia brings the total number in the Church worldwide to 3,025.