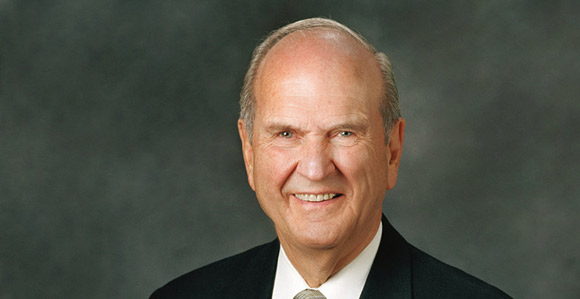 “We encourage you to keep all that is good and true, and then see if we can add more. In this world filled with challenges, we do need help from time to time. Religion, eternal truth and our missionaries are vital parts of that help.” —Elder Russell M. Nelson of the Quorum of the Twelve Apostles

“The decision to serve a mission will shape the spiritual destiny of the missionary, his or her spouse, and their posterity for generations to come,” Elder Nelson said. “A desire to serve is a natural outcome of one's conversion, worthiness and preparation.

”In this vast worldwide audience, many of you are not affiliated with The Church of Jesus Christ of Latter-day Saints and know very little about us and our missionaries. You are tuned in because you want to know more about the Mormons, and what our missionaries teach. As you learn more about us, you will find that we share many of the same values. We encourage you to keep all that is good and true, and then see if we can add more. In this world filled with challenges, we do need help from time to time. Religion, eternal truth and our missionaries are vital parts of that help.“

He explained how young missionaries, and some members in their more mature years, set aside their usual pursuits to give full-time service to the Lord.

Elder Nelson explained that the name ”Mormon“ is a nickname derived from the Book of Mormon and that true name of the Church is ”The Church of Jesus Christ of Latter-day Saints.“

He said that Latter-day Saints follow the Lord Jesus Christ and teach of Him and His triumph over death, and that today, under the direction of modern apostles and prophets, they follow the Savior's charge to ”Go...and teach all nations, baptizing them in the name of the Father, and of the Son, and of the Holy Ghost“ (Matthew 28:29).

Missionaries serve in more than 150 nations, and many serve in countries and languages foreign to them.

”Missionaries strive to follow Jesus Christ in both word and deed. They preach of Jesus Christ and of His Atonement. They teach of the literal restoration of Christ's ancient Church through the Lord's first latter-day prophet, Joseph Smith.

“You may have previously encountered missionaries. The hope is that you will not fear them but learn from them. They can be a heaven-sent resource to you.”

To illustrate this point, Elder Nelson told of Jerry, a Protestant man in Arizona, whose friend Pricilla was struggling with the death of a child and a bitter divorce. Jerry didn't know what to do to help her. One day, as he prayed for guidance, he heard voice in his mind saying, “Stop the boys on the bikes.” As he reflected on the impression, he gazed up the street and saw two young men in white shirts and ties riding bicycles. He shouted out, “Hey, you, please stop!”

Soon the missionaries met with Jerry, Pricilla, and her children. They discussed the purpose of life and God's eternal plan for them. Their faith increased and their doubts diminished. They were baptized and became members of Christ's restored Church.

Elder Nelson related several concerns and questions people often have and followed up with the suggestion, “Ask the missionaries! They can help you!”