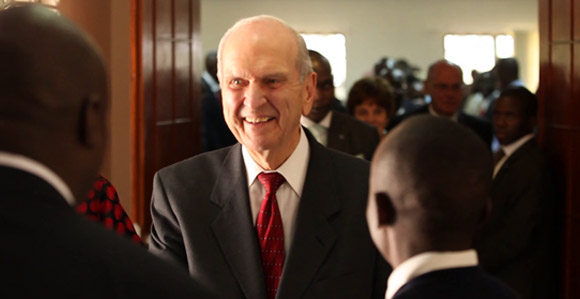 “We’re watching the Lord move upon this great continent of Africa to bless the people … with the truth, the light of the gospel, and more importantly, the ordinances of salvation and exaltation.” —Elder Russell M. Nelson, Quorum of the Twelve Apostles

During the final leg of a trip to the African continent, Elder Russell M. Nelson of the Quorum of the Twelve Apostles visited Kenya on October 29 and 30, where he spoke at a public affairs event, a meeting with missionaries, and a priesthood leadership meeting and stake conference of the Kenya Nairobi Stake.

In his address to missionaries, Elder Nelson chose to base his message around values they could focus on—ones that would be familiar to the women because they come from the Young Women theme. Elder Nelson said to the men in attendance that the values “are as worthy of your attention as they are for the young women.”

Elder Nelson told the audience: “Individual worth includes the development of faith. … No one else can develop your own faith. …You develop it yourself.”

Faith then leads to individual covenants and ordinances of salvation, such as baptism, he said.

Drawing on his career as a medical doctor, Elder Nelson talked about the miracles of the human body. He asked the congregation to consider their eyes, their fingers, their hearts.

“Your nature is divine because you have divinity within you,” Elder Nelson said. “[Heavenly Father] created you.” He contrasted his belief with that of those who believe that humans are a result of chance or that creation came about through the Big Bang theory. “As a medical scientist, I know that is not true,” he said. “Every organ in the body is so well designed and so marvelous in its function and its ability to heal itself and repair itself and take care of itself.”

He encouraged the missionaries to take good care of their bodies and to avoid doing anything that would “defile the natural body as a God-given creation.”

In describing individual worth, Elder Nelson talked about his wife, Wendy Watson Nelson, whom he married in April 2006, and her preparation for marriage over many years.

One of the ways she prepared was through education.

“Education is one of your prime objectives,” Elder Nelson said. “The glory of God is intelligence (see D&C 93:36), so fill your mind with truth. … Expose yourself to good books and to good thoughts and to good music.”

Continuing on the theme of education, Elder Nelson said, “With us, obtaining an education is a religious responsibility.

“We don’t cop out of school. We hang in there, and we work hard so that one day we can really render service of worth to somebody else. Education is the difference between wishing you could do some good and being able to do some good.”

Elder Nelson reflected on his own training. Although medical school took many years—he and his wife had five children by the time he finished—he pointed out that he would have been the same age at that point whether he had gone to school or not. “You might as well be going for all you can become,” he said.

He also pointed out that his medical training was what allowed him to operate on President Spencer W. Kimball (1895–1985) in 1972. The operation prolonged President Kimball’s life substantially. He became President of the Church in 1973 and in 1978 received the revelation that the priesthood was to go to every worthy male.

Choice and accountability—also called moral agency—means that for every choice we make we are responsible for the consequences of that choice as well, Elder Nelson said.

“Since the War in Heaven, there has been this competition for each of our souls between the forces of evil and the forces of good,” said Elder Nelson. “You feel it just about every day of your lives.”

The way to happiness, Elder Nelson said, is to draw closer to the Lord. One way to do that is to hearken, or to listen with the intent to obey.

In acquiring the attribute of good works, Elder Nelson said, we can look to the example of the Savior. “Jesus … loved people, and when He loved people, He served them.” He encouraged the congregation to learn to serve by finding a need and then filling it.

“Integrity means we’re dependable,” he said. He spoke of the privilege he and other members of the Quorum of the Twelve Apostles have in working with other General Authorities who have “proven integrity.”

“Whenever we ask them to do something, we never, never wonder if it will get done,” he said.

Elder Nelson spoke about the newest Young Women value, virtue, both in terms of purity and of power.

“What really matters is what you are becoming,” Elder Nelson said. “We want all of you to have the power to become what the Lord would have you become. … As you think about the attributes of the Young Women values, young men and young women, they will help you to be all that you can be.”

In 1972, when President Kimball was President of the Quorum of the Twelve Apostles, he was very ill. He called a meeting with his wife, the First Presidency—President Harold B. Lee, First Counselor N. Eldon Tanner, and Second Counselor Marion G. Romney—and two of his doctors—Elder Nelson being one of them. (Elder Nelson was still a practicing surgeon at the time; he would become a General Authority 12 years later, in 1984.)

“It was a very unusual meeting,” Elder Nelson recalled. “He said to the First Presidency: ‘Brethren, I am a dying man. I know I won’t live long.'”

As the surgical consultant, Elder Nelson confirmed that President Kimball had serious heart disease—both in the main valve to his heart and in the main supply line to the heart muscle, which had a high-grade obstruction.

Elder Nelson also recalled that because of the two kinds of disease and President Kimball’s advanced age—he was nearly 78 years old—surgery was extremely risky. He told President Lee: “I cannot recommend surgery.” The other physician confirmed that President Kimball’s situation was dire and that he had days, possibly weeks, to live.

President Lee then rose to his feet and said to President Kimball: “You have been called. You are not to die. You are to do anything that you need to do in order to live.” President Kimball agreed to have surgery. “And I shrank in my chair,” Elder Nelson said. “I did not want to operate on him.”

The surgery was scheduled for after general conference; President Kimball’s health was so poor that he was able to attend just one session. Prior to performing the operation on President Kimball, Elder Nelson received a blessing from President Lee and President Tanner.

When President Lee died a year later, President Kimball, as the presiding Apostle, became the prophet. And in 1978 he received a revelation that all worthy males could receive the priesthood.

“So I stand before you with great affection and admiration for you and know that President Kimball would have loved to be in my shoes to greet each one of you,” he said. “We’re watching the Lord move upon this great continent of Africa to bless the people … with the truth, the light of the gospel, and more importantly, the ordinances of salvation and exaltation.”

He focused the remainder of his message on “fundamental concepts” about God, Jesus Christ, the Book of Mormon, and the restoration of the priesthood. He said that they were “going right down to the bedrock” so that when priesthood leaders counseled with people, and made decisions they could “reflect upon the will of the Almighty God and His Son, Jesus Christ, and get [their] own answers.

“You’ll access that by prayer, of course, and strengthen those impressions by counseling with your counselors and councils,” he said. “You’re not alone. The gift of the Holy Ghost in you can be honed, sharpened, refined and cultivated to become a powerful instrument for you.”

He also cited Jacob 1:19, reminding priesthood holders, “You’re not here simply to be taught. You’re here to be a conduit so the people you lead will be taught according to the doctrine of Jesus Christ and the will of God.”