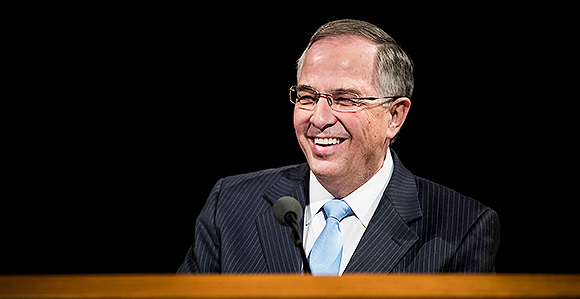 In his address, Elder Andersen shared more insight about “ministering in a holier way,” as President Russell M. Nelson described during April general conference, and gave examples of how different people have ministered to others.

“To minister spiritually can begin with baking cookies or playing a basketball game, but eventually this holier way of ministering requires opening your heart and your faith, taking courage in encouraging the positive growth you are seeing in a friend or in expressing concerns about things you see and feel that are not consistent with discipleship.” —Elder Neil L. Andersen of the Quorum of the Twelve Apostles

As a freshman in college and away from home for the first time, Melanie Black, a student studying advertising at Brigham Young University, accepted the call to be a visiting teacher and has been doing her best to reach out to the girls she is assigned to visit.

Although she is fairly new at visiting teaching, as she listened to general conference just over a week ago, she was excited about the changes announced by President Russell M. Nelson. Admitting she is willing to answer the prophet’s call to “minister” rather than visit teach, she was left with questions about how she would accomplish that task.

“I have been trying to figure out how to do it the best I can,” she said. “I was a little confused and was hoping for some clarification.”

Although there isn’t a magic formula or specific way of doing things, after attending this week’s campus devotional with Elder Neil L. Andersen of the Quorum of the Twelve Apostles, Melanie has a better idea of what she is expected to do.

“He explained to us how we can do it,” she said. “He told us to pray, listen to the Spirit, write it down, and then go and do.”

Her friend, Grace Pingree, who is also a freshman and is studying biochemistry, said after hearing Elder Andersen speak, she understands that her calling to minister goes beyond a simple act of service or kind note.

“It is more focused in a spiritual way,” she said. “Rather than just focusing on physical needs, I need to help strengthen faith.”

The two friends are not alone. Many students—and Church members alike—are wondering what “ministering” will look like.

In his address, Elder Andersen shared more insight about “ministering in a holier way,” as President Nelson described, and gave examples of how different people have ministered to others.

“As disciples of Christ, we strongly reject the notion that our lives are all about ourselves,” Elder Andersen said. “Rather, we follow the Savior.”

An important part of ministering is remembering the first and second commandments given by the Savior—first, to love the Lord, and second, to love thy neighbor as thyself.

“Your ability to bring a holier approach to loving your neighbor, to caring and ministering to others will rest upon how strongly you keep the first commandment,” he said. “There is a unique and supernal gift of ministering that can come from someone who loves God with all his or her heart and is settled, grounded, steadfast, and immovable in his or her faith in Jesus Christ and in the restored gospel and keeps the commandments with exactness.”

Young people across the world today are more and more “slipping” in their faith, especially in their belief in a specific religion. While many in the world want to be “spiritual, but not religious,” Elder Andersen emphasized that the Restoration of the gospel brought ordinances, covenants, and direction from Heavenly Father and the Savior. 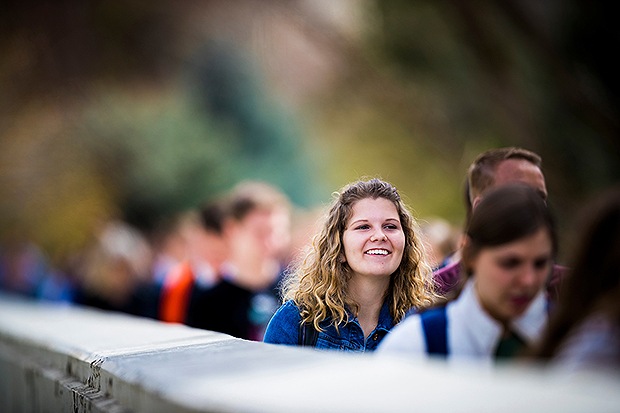 Students walk on the BYU campus on their way to the campus devotional to hear Elder Neil L. Andersen. Photo by Nate Edwards, BYU.

“Faith flourishes, and we here this morning are believers,” he said. “But it is naïve, however, to believe the trends of the world are not able to influence the very elect.”

Caring for others—physically and emotionally—requires an unselfish and sensitive heart.

“It is an important part of the gospel,” he said.

Recognizing that caring is done in and out of the Church by good people who are both believers and nonbelievers, Elder Andersen said that as a converted member of the Church, there is another elevated kind of ministering.

“You have the opportunity as disciples of the Savior to minister in a way that helps keep a friend’s faith from faltering, that reminds a roommate in a kind way that reading the Book of Mormon every day really does bring miracles, and that the standards of the Church are not just a set of rules but keep us closer to God and bring us happiness.” 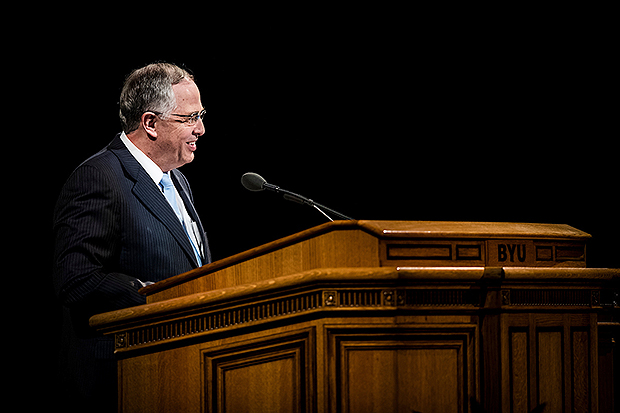 Elder Andersen encouraged listeners to be “spiritually courageous” in ministering in a holier way and warned of becoming self-righteous. Photo by Nate Edwards, BYU.

A kind person with a good heart may help a person fix a flat tire, drive a roommate to the doctor, or reach out to someone who is sad.

“But a follower of the first commandment will naturally add to these important acts of service, encouraging the person doing well in keeping the commandments, and sharing wise counsel to strengthen the faith of someone who is slipping or who needs help in moving back onto the path he once traveled,” he said.

Even at BYU, where most are members of the LDS faith, students are surrounded by others who are in various stages of their testimony.

“I challenge you to strengthen your efforts to spiritually minister to one another,” he said. “To minister spiritually can begin with baking cookies or playing a basketball game, but eventually this holier way of ministering requires opening your heart and your faith, taking courage in encouraging the positive growth you are seeing in a friend or in expressing concerns about things you see and feel that are not consistent with discipleship.”

Elder Andersen encouraged listeners to be “spiritually courageous” in ministering in a holier way and warned of becoming self-righteous. He also encouraged students to be aware of those around them, noticing when slight changes occur, such as a roommate’s demeanor, choices, or actions that might begin to be less faithful.

“The greatest need here at Brigham Young University, as anywhere else in the world, is more faith in our Heavenly Father and in His Son, Jesus Christ, and a greater willingness to follow His commandments,” he said. 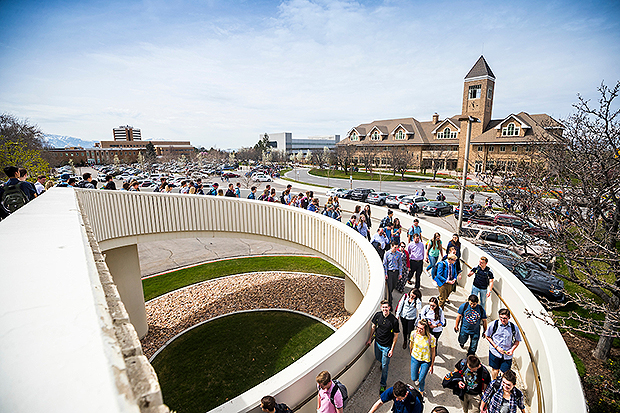 “The greatest need here at Brigham Young University is more faith in our Heavenly Father and in His Son, Jesus Christ, and a greater willingness to follow His commandments,” Elder Andersen said. Photo by Nate Edwards, BYU.

Following the pattern of the Savior in ministering will be different from one person to another, he said. Sharing the example of a friend helping another friend who was experiencing doubts, Elder Andersen said ministering is more than just a one-time event.

“Unlike changing a flat tire, one experience rarely fixes a spiritual problem,” Elder Andersen said. “It takes time, conversations, and encouraging experiences that will help rebuild faith. It comes more like the dew from heaven than a one-time blast from a fire hose. You have to minister again and again as you help someone turn back to God, again relying on the Savior and His Atonement.”

To minister in the Lord’s way, individuals need the help of the Holy Ghost.

“Let us pray, listen, record our thoughts, and take action about those to whom we can minster,” he said. “Pray for the opportunities to build faith in others.”

To have help from the Holy Ghost, the Apostle said a person must prepare his or her mind and heart.

“In your generation, you need discipline and restraint in how you use your technological devices. … For the Spirit to dwell in us, we have to have time and space. Learn to put your smartphones down. Insert time when your technology is intentionally not accessible.”

When Brittian Usher, a junior studying microbiology, heard Elder Andersen, he recognized that more than doing a specific visit with a short message, he needs to rely on the Holy Ghost as he ministers to others.

“As I am open to the Spirit and am willing to take action I will be able to follow the Spirit’s promptings in ministering to others,” he said. “It isn’t just a numbers game, it is now a way for us to do what we can to help, and do it in a ‘higher,’ more spiritual way.” 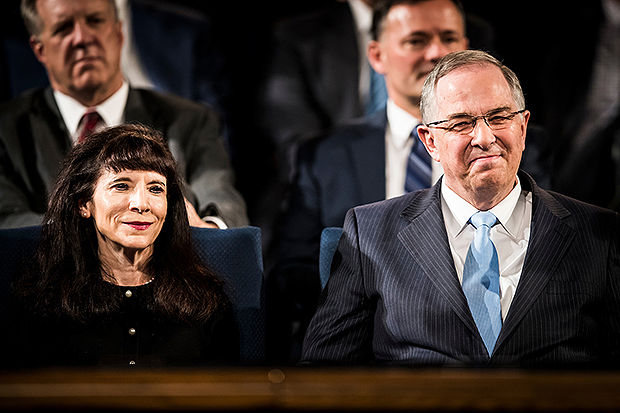 Elder Neil L. Andersen of the Quorum of the Twelve Apostles and his wife, Sister Kathy Andersen, sit on the stand during a campus devotional on April 10. Photo by Nate Edwards, BYU.