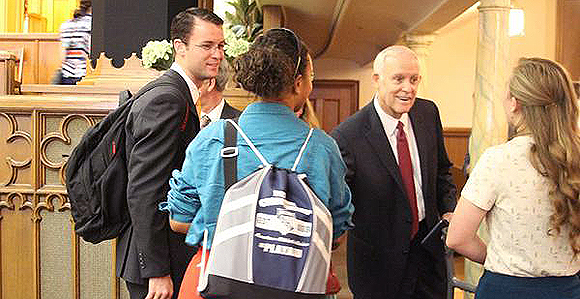 “Everyone here is an experienced war veteran. We have been battling the host of evil in an ongoing war that began in the premortal sphere before we were born.” —Elder Larry R. Lawrence of the Seventy

Elder Larry R. Lawrence of the Seventy spoke to LDS Business College students in the Assembly Hall on Temple Square on Tuesday, June 23.

“Everyone here is an experienced war veteran. We have been battling the host of evil in an ongoing war that began in the premortal sphere before we were born,” he said. “Satan’s strategy was to frighten people. He knew that fear was the best way to destroy faith.”

God’s plan triumphed and Jesus Christ volunteered to suffer for the sins of mankind. Elder Lawrence warned students to beware of the pride that consumed Satan. “Lucifer rebelled because he wanted God’s kingdom for himself,” he said.

Elder Lawrence said the best way to combat an enemy is to know his tactics.

He gave students four strategies that Satan uses and some ideas to on how to resist them.

Elder Lawrence declared, “One of the most effective tools to fight temptation is to simply send Satan away. That’s what Jesus would do.” He then told the story found in the New Testament when Jesus commands Satan to “get thee hence.”

Another way to combat direct temptation is to quote scripture or commandments. “Scripture power not only intimidates the devil but it brings the Spirit into your heart and reassures you,” he said.

This is one of the easiest tactics, Elder Lawrence declared. “Don’t believe him when he whispers messages such as ‘You never do anything right,’ ‘You are too sinful to be forgiven,’” and many other common lies. Elder Lawrence also warned students of believing that trying something, like drugs, alcohol, or stealing, will give them experience. “The dirty little secret that he doesn’t want you to know is that sin is very addictive,” Elder Lawrence said.

“The devil has learned from centuries of experience that where there is contention, the Spirit of the Lord will depart,” Elder Lawrence said. “When there is contention in your home or workplace, stop whatever you are doing immediately and seek to make peace.”

Elder Lawrence proposed that Satan enjoys spreading contention in the Church and “specializes in pointing out the faults of Church leaders. … The devil is working harder today than ever before to make members question their testimonies of the Restoration.”

“[Satan] uses this tool effectively on the most faithful Saints when all else fails,” Elder Lawrence said. To combat discouragement, he suggested wholesome activities, including serving others, avoiding idleness, practicing good health habits, seeking a priesthood blessing, and praying to conquer Satan.

Elder Lawrence spoke of good news: the Godhead has set limits to the power of evil; Satan is not allowed to cross them. The armies of God, which include “legions of angels fighting with us on the other side,” are larger than the armies of the adversary.