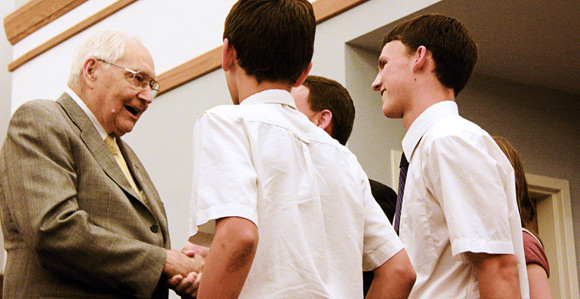 “Let us be bold enough and strong enough to build this great community for the generation that will come after us, for we will find that when we dedicate ourselves to making this a place that will bless those that follow, then we will find the greatest joy and happiness in our lives.” — Elder L. Tom Perry, Quorum of the Twelve Apostles

Elder L. Tom Perry of the Quorum of the Twelve Apostles spoke of patriotism, nation-building, and moral renewal to community members in Perry, Utah, USA, on July 3 during the city’s centennial celebration.

“We believe strongly that the Constitution was brought about by God to ensure [that] this nation [would be a place] where liberty could abound and where His gospel and His teachings could flourish here on the earth,” Elder Perry said.

Elder Perry’s ancestors were one of two families who first settled in the Perry, Utah, area and committed themselves to establishing a community with traditional values such as religion, education, and recreation. Elder Perry paralleled their faith with that of the pilgrims and the pioneers who established this nation because of their belief in God. He encouraged a reassertion of such values and morals for the benefit of future generations.

He explained the importance of recognizing the miraculous and inspired forthcoming of the Declaration of Independence and the Constitution of the United States and emphasized the value of living a moral life.

“The success of the Declaration of Independence and the Revolutionary War came by men who were raised by God for this very purpose,” Elder Perry said. “Where else in history do we find a stronger group of men who possessed greater capacity and wisdom than our Founding Fathers?” But they did not credit their own abilities, he said. “They all acknowledged Almighty God and were certain that it was impossible to succeed without His help.”

Elder Perry said that Americans often forget how important religion was to the Founding Fathers in establishing the rules and laws that govern citizen conduct. He said they felt religion would be as important to Americans today as it was for them in their day.

Bruce Tams, president of the Perry Utah Stake, also emphasized the importance of religion in fulfilling the responsibility to protect freedom and liberty.

Elder Perry spoke of the loss of the ability or desire to serve by many of the nation’s citizens and the division that loss creates in communities.

“We have developed an attitude of wanting what is right for me now, rather than what we could do to build our great land for future generations,” he said. “Maybe we can refocus our desires, look to the history of the past of this great “land of the free” and see what made this nation so strong.

“Have we become so caught up in ourselves that [we] would rob future generations of the rich heritage that we’ve been blessed with?” he asked. “There needs to be a reassertion of traditional values.”

Elder Perry taught that through our good actions, teachings, and examples, the world could be made a better place. That is the only way to find lasting satisfaction in mortality, he said.

President Tams also encouraged audience members to get involved and to surround themselves with good people in every aspect of their lives.

“If we are not involved, we give our liberties up,” he said.

Elder Perry emphasized that being dedicated to freedom and having a desire to follow eternal truths will make a better people and a better nation.

“Let us be bold enough and strong enough to build this great community for the generation that will come after us,” he said, “for we will find that when we dedicate ourselves to making this a place that will bless those that follow, then we will find the greatest joy and happiness in our lives.”