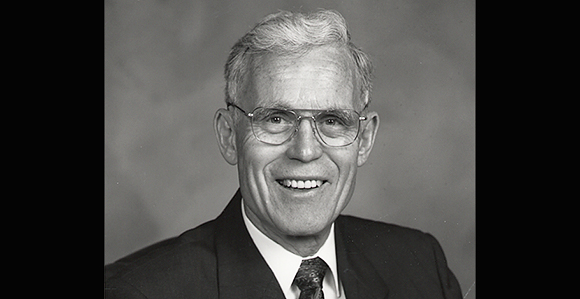 Elder James O. Mason, 89—the former head of the U.S. Public Health Service, who also served for five years as a General Authority Seventy for The Church of Jesus Christ of Latter-day Saints, died Wednesday, October 9, 2019.

Elder Mason, a prominent spokesman for preventive medicine, was called to the Second Quorum of the Seventy in the April 1994 general conference and was released at the October 2000 conference.

After his release, Elder Mason served as president of the Bountiful Utah Temple from 2000 to 2003.

Elder Mason served for about four years as assistant secretary for health and head of the U.S. Public Health Service before his call as a General Authority. Previously, he had been director of the Centers for Disease Control, executive director of the Utah Department of Health, associate professor and chairman of the Division of Community Medicine at the University of Utah School of Medicine, Church commissioner of health services, and director of the LDS Hospital infectious disease division.

James Ostermann Mason was born on June 19, 1930, in Salt Lake City, the son of A. Stanton Mason and Neoma Thorup Mason. He met his wife-to-be, Marie Smith, when her family moved into the East Ensign Ward when they were 13; they were married December 29, 1952, in the Salt Lake Temple. He graduated from West High School.

They were the parents of seven children.

After his retirement from government service, the family moved back to Farmington, Utah.

In his only general conference address, during the Saturday afternoon session of the October 1994 conference, he said the Church was thriving in Africa despite turmoil and disruption.

Elder Mason served a mission to Denmark from 1950 to 1952, taking time out from engineering studies at the University of Utah. While on his mission, he found he enjoyed interacting with people.

“I had this very strong and compelling impression that the Lord wanted me to do something in medicine,” he told the Church News in an interview after he was sustained to the Seventy.

He served his internship at Johns Hopkins University Medical Center in Baltimore and, after military service, a residency in internal medicine at the Peter Bent Brigham Hospital, Harvard Medical Service.

In 1959 he entered a branch of the U.S. Public Health Service, and at that time he decided he wanted to work in preventive medicine. He also developed an affection for disadvantaged people while at Johns Hopkins.

He jogged throughout his life and with his family hiked and skied. “Vision” was the watchword that guided his life.

As assistant secretary for health in the Department of Health and Human Services, he directed the drafting of Healthy People 2000, which envisioned how the nation should proceed in health promotion and disease prevention.

Elder Mason was widely quoted in the media on preventive medicine and received numerous honors. He also was author of numerous articles in the Utah State Medical Association Journal and the USMA supplement to the Western Journal of Medicine. He was licensed in Georgia and Utah and certified in general preventive medicine by the American Board of Preventive Medicine.

Elder Mason was the Church’s commissioner of health services when in 1974 the Church turned over operation of 15 hospitals to a new nonprofit corporation, Intermountain Health Care. The hospitals had been brought into strong economic and quality position so they could be divested from the Church. He retained his post for two more years after the changeover.

In local Church service, he served in stake presidencies and on high councils in Boston, Massachusetts; Atlanta, Georgia; and Salt Lake City and was president of the Atlanta Georgia Stake. He served as bishop twice in Salt Lake City—for the University 13th and Ensign 6th wards. He also was a regional representative to the Rock Springs, Wyoming, region and Jacksonville, Tampa, and Tallahassee regions in Florida.

In the 1970s, Elder Mason served on the Aaronic Priesthood MIA general board.

Funeral services will be Saturday, October 19, 2019, at 11:00 a.m. at the Farmington Utah North Stake Center, 729 West Shepard Lane, Farmington, Utah. Public viewings were scheduled for the previous evening and prior to Saturday’s services.