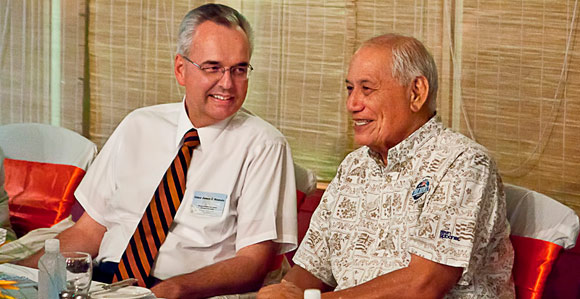 Pacific Area President Elder James J. Hamula of the Seventy, left, visits with Samoa Head of State His Highness Tui Atua Tupua Tamasese Efi at a dinner to launch the Managing Religious and Cultural Diversity in the Pacific conference.

“Traditional Christianity acknowledges religious liberty as a fundamental right of all human beings, even those who choose another faith, or choose not to believe at all. … The Church of Jesus Christ of Latter-day Saints teaches the same thing.”—Elder James J. Hamula of the Seventy, Pacific Area President

“I know firsthand about the diversity in this region because I have visited much of it,” Elder James J. Hamula of the Seventy told delegates at the first Managing Religious and Cultural Diversity in the Pacific conference held recently at the National University of Samoa in Apia.

Elder Hamula, who is President of the Church’s Pacific Area, continued: “We have congregations in 22 different countries or territories in the region and operate in 14 different language groups. Of the nearly 35,000,000 people in the region, 500,000 are Mormons (as others call us) or Latter-day Saints (as we call ourselves). In this region, this fact makes us a minority relative to the total population, although the degree of our minority status varies from place to place. In Tonga and Samoa, for instance, our percentage is 45 percent and 30 percent of the total population, respectively. By contrast, in Australia and New Zealand, our percentage is about 1 percent.

“Not only are we a minority in the total population, Mormons also are a minority in the family of Christian traditions in nearly every country in the region. While … other Christian faiths arrived in the Pacific in the first half of the 19th century, we arrived generally after the initial introduction of Christianity to the people of the Pacific. That said, we have grown steadily and consistently in every country or territory where we are established.

“I mention our minority status relative to total population and other Christian faiths,” he said, “because it explains, in part, our keen interest in the preservation of religious liberty. Throughout history, minority groups have found themselves the victims of persecution and even banishment from majority groups. That has been our history, in the Pacific and elsewhere.”

Elder Hamula suggested that there are two general problem areas with respect to religious freedom in the Pacific.

The second problem area in the Pacific, he said, is “societies that are increasingly secular. Here, the problem is that all religious faith is increasingly in the minority. As a result, the increasingly secular, nonreligious majority is using its increasing access to political power to marginalize and restrict religion. Here, secular voices allege that religious liberty is in conflict with newly asserted human rights, such as the right of same-gender couples to enjoy the privileges of marriage.”

Further, he said, “traditional Christianity acknowledges religious liberty as a fundamental right of all human beings, even those who choose another faith, or choose not to believe at all. For instance, the Catholic Church’s Declaration on Religious Freedom, issued by the Second Vatican Council on December 7, 1965, makes clear Christianity’s position on religious freedom:

‘This Vatican Council declares that the human person has a right to religious freedom. This freedom means that all men are to be immune from coercion on the part of individuals or of social groups and of any human power, in such wise that no one is to be forced to act in a manner contrary to his own beliefs, whether privately or publicly, whether alone or in association with others, within due limits. The council further declares that the right to religious freedom has its foundations in the very dignity of the human person as this dignity is known through the revealed word of God and by reason itself. This right of the human person to religious freedom is to be recognized in the constitutional law whereby society is governed and thus it is to become a civil right.’”

Elder Hamula said, “The Church of Jesus Christ of Latter-day Saints teaches the same thing. Our eleventh article of faith provides that ‘we claim the privilege of worshiping Almighty God according to the dictates of our own conscience, and allow all men the same privilege, let them worship how, where, or what they may.’ Further, we have ‘a declaration of belief regarding governments and laws’ (D&C 134, section heading). In part, this declaration provides as follows:

“‘We believe that governments were instituted of God for the benefit of man; and that he holds men accountable for their acts in relation to them, both in making laws and administering them, for the good and safety of society.

“‘We believe that no government can exist in peace, except such laws are framed and held inviolate as will secure to each individual the free exercise of conscience, the right and control of property, and the protection of life. ...

“‘We believe that religion is instituted of God; and that men are amenable to him, and to him only, for the exercise of it, unless their religious opinions prompt them to infringe upon the rights and liberties of others; but we do not believe that human law has a right to interfere in prescribing rules of worship to bind the consciences of men, nor dictate forms for public or private devotion’ (D&C 134:1–2, 4).”