Elder Holland Visits Peru, Ecuador during Unique Season in the History of the Church in South America 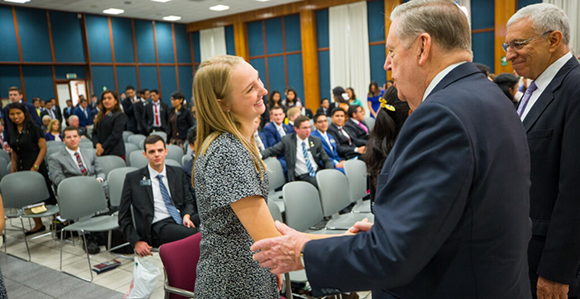 Elder Jeffrey R. Holland greets a missionary during a meeting in Lima, Peru.

The Church of Jesus Christ of Latter-day Saints in Peru and Ecuador—a beautiful and historic area of South America that was once home to the ancient cultures of the Norte Chico civilization and the Inca Empire—is defined today by “a vitality, an enthusiasm and youthful strength,” said Elder Jeffrey R. Holland.

It was something he felt “hour after hour and handshake after handshake” during a recent assignment to the Latin American nations.

During the trip, Elder Holland of the Quorum of the Twelve Apostles pondered a beautiful parable found in Doctrine and Covenants 88:51-61, where the Lord visits each of His kingdoms and their inhabitants in turn. “They all received the light of the countenance of their lord, every man in his hour, and in his time, and in his season.”

This is one of those seasons for Peru and Ecuador, said Elder Holland, noting that the Church is creating stakes, expanding missionary work, and building temples in these countries.

Visiting the countries was a “wonderful snapshot of growth in that part of Latin America,” he said. “As the clock turns and as the calendar runs, there are special blessings that go with this idea of the season.”

Peru has more than 600,000 members of the Church, 13 missions, and three temples, with plans to build another. It is one of just five nations with more than 100 stakes; in addition to Peru, the United States, Brazil, Mexico, and the Philippines have reached the 100-stake milestone.

The nation has recently moved “from a period of high inflation and emigration to one of economic security,” said Elder Enrique Falabella, a General Authority Seventy and President of the South America Northwest Area, headquartered in Lima.

There were Church members in Peru as early as 1940. However, the first branch was not organized until 1956—the year full-time missionaries arrived in the country.

Ecuador has 250,000 members, 42 stakes, five missions, and one temple, with a second temple under construction.

Quito is the second-highest capital city in the world, sitting at 9,350 feet above sea level. Missionaries arrived in Ecuador in 1965, and the Ecuador Mission was created five years later.

Elder Holland and his wife, Sister Patricia Holland, met with members and missionaries in Arequipa and Lima, Peru, and Quito, Ecuador, during their visit to the Church’s South America Northwest Area. They also ministered to Latter-day Saints in Venezuela via technology, Venezuela being a country for which visas are not currently available.

“I assure you that the visit was an uplifting experience,” said Elder Falabella. “Elder and Sister Holland held devotionals with sisters, returned missionaries, new converts, and married couples. One of the great experiences was to hold a meeting with all missionaries serving in Venezuela. He did it through the internet.”

The faces of the Church’s missionary force, as well as of the youth and young adults, in all three countries communicated the “brightest message” to the Hollands.

“I have no doubt that all those who participated in the devotionals felt the Spirit of the Lord in their lives,” said Elder Falabella. “I saw many of them with watering eyes and a face reflecting the joy for having a member of the Twelve among them. Elder Holland focused his teachings on the doctrine with such a power that all of us have now a greater desire to be true disciples of Jesus Christ.”

Elder Falabella also feels that the Church’s South America Northeast Area is experiencing a wonderful season. He saw a “renewal of faith” among Church members in the area after President Russell M. Nelson visited in October 2018 and again in August 2019.

“The words of the prophet bring power to the people,” he said. “They feel his love. They are renewed.”

Elder Falabella said sacrament meeting attendance in the area has increased in the last two years after “dipping” for many years.

In addition, members have started thinking about education. Elder Falabella said he expects to see an increase in members seeking educational opportunities. 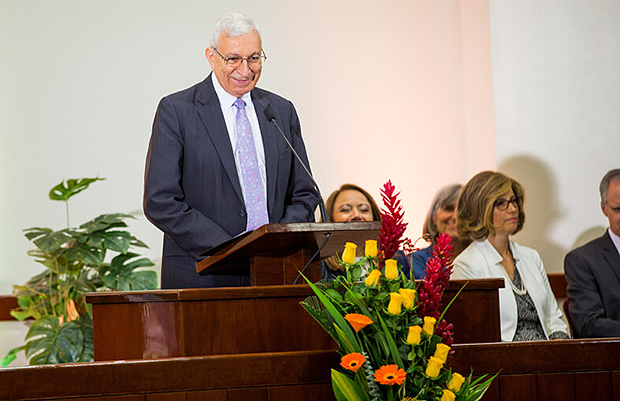 The video conference to members and missionaries in Venezuela was also a highlight of the ministry for Elder and Sister Holland.

Before participating in a two-way video exchange, Elder Holland expected to lament the conditions in their country and was prepared to offer sympathy. Instead he found an enthusiasm for the work and the future in the nation, where members and missionaries have rallied despite hardships.

“No one seemed frustrated. Nobody was discouraged,” Elder Holland said. “Missionaries and their leaders were happy and joyful. … We had both laughter and tears. What a way to turn a difficult situation into a wonderfully positive experience.”

Many in Venezuela have to line up for two or three days to buy fuel. Missionaries there, all native Venezuelans, have had great success walking the streets and visiting with individuals waiting for gasoline.

Much of the strength in Church’s South America Northeast Area comes from a capable Area Presidency—all from Latin America, said Elder Holland. Elder Falabella and his counselors—Elder Jorge F. Zeballos and Elder Mathias Held—“are doing an excellent job. They have vision, enthusiasm, and an understanding of local culture.”

It is everything that is needed to lead the area during a season when countries are receiving “the light of the countenance of their Lord,” he said. 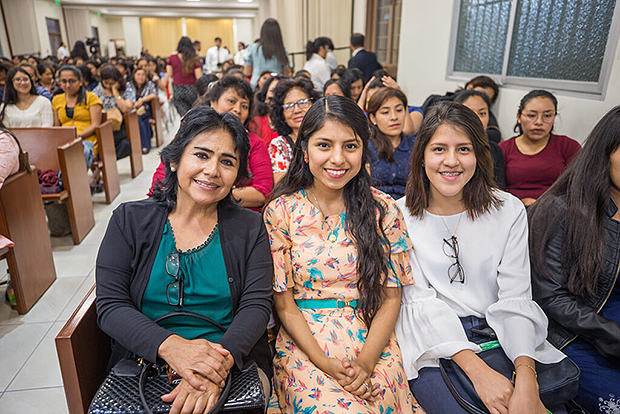