Elder Holland Tells Missionaries to “Invest” in the Work

Elder Jeffrey R. Holland holds up an index card containing a quote from Joseph Smith that he read during his talk to missionaries in the Missionary Training Center in Provo, Utah, on January 15. Photo by R. Scott Lloyd.

“We expect you to be mature, powerful, bold, spiritual missionaries. And you have to have an abiding conviction of this work in your heart.” —Elder Jeffrey R. Holland of the Quorum of the Twelve

There might have been a more exciting time to be a missionary in the Church, “but I do not know when that would be,” Elder Jeffrey R. Holland declared to the missionaries at the Provo Missionary Training Center in a devotional address January 15.

“There is an enthusiasm, an excitement, a zeal right now that is unlike anything I know of in recent years,” Elder Holland said. He referred to the dramatic increase in interest since President Monson announced in October general conference the lowering of the age of eligibility for missionary service to 18 for men and 19 for women.

Elder Holland read a quote from the Prophet Joseph Smith that he said has taken on new meaning for him, though it was equally true when Joseph made the statement in the early days of the Church when there were only a few hundred members. The Prophet said: “The building up of Zion is a cause that has interested the people of God in every age; it is a theme upon which prophets, priests and kings have dwelt with peculiar delight; they have looked forward with joyful anticipation to the day in which we live; and fired with heavenly and joyful anticipations, they have sung and written and prophesied of this, our day; … we are the favored people that God has made choice of to bring about the latter-day glory” (History of the Church, 4:609–10).

“I am ‘fired with heavenly and joyful anticipation,’” Elder Holland said, “and if I could sing, I would sing!”

Elder Holland said he has a feeling regarding earlier apostles, prophets, priests, and kings—earlier missionaries—“that although they knew they would not succeed in their day, they were able to continue to labor because they knew we would succeed. In that sense they could sing and prophesy and take heart, not of their day, but of our day.”

He added: “This is the generation when the work will not fail. This is the dispensation that will receive the Son of God as the Lamb of God, and we will hand to Him the Church of the Lamb.”

He said missionaries often ask him when that Second Coming of Christ will occur. He responds that he does not know. “But I am quick to say that process has already begun,” he said, explaining that it began with the appearance of the Father and the Son to the Prophet Joseph Smith in 1820 and will culminate with the coming of Christ to reign personally upon the earth, of which culmination “no man knoweth” the day or the hour (see D&C 49:7).

Because of the significance of the latter days, “you have to be the best missionaries we’ve ever had, because no task has ever been put before a missionary like the one we’re putting before you,” Elder Holland said. “We expect you to be mature, powerful, bold, spiritual missionaries. And you have to have an abiding conviction of this work in your heart.”

He said: “Missionaries are under obligation to come home having had at least one convert, you! There is no excuse in time or eternity for you not to have that one precious conversion.” 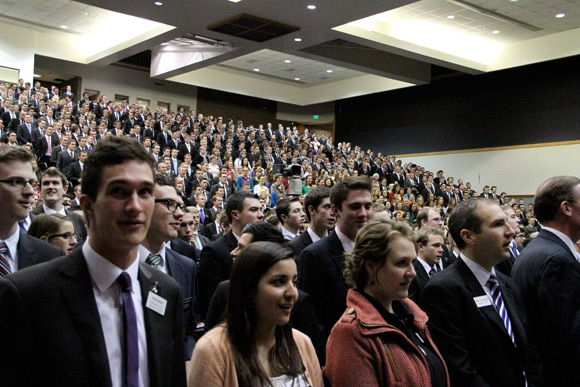 Missionaries at the Missionary Training Center in Provo, Utah, prepare to listen to Elder Holland’s message on January 15. Photo by R. Scott Lloyd.

He said that because of the greatness of his own mission experience, “I cannot bear for you not to have that same experience.”

“So you’ve got to invest yourself in this for your sake, for the Church’s sake, and for heaven’s sake. The angels are smiling down on this dispensation and expect so much of you in order that the Lord can triumphantly come. There’s a lot riding on your shoulders.

“We know that. We know you’re young, but we don’t apologize for that. God has chosen young people to do His work from the beginning of time, and He has chosen you.”

The idea behind the current missionary guide, Preach My Gospel, is “to convert you, then help you to convert the [individual] investigators,” he said.

He added that the title of the missionary guide is taken from section 50 of the Doctrine and Covenants and added that the personal pronoun “my” pertains to the Savior Himself.

“The point is you have to understand that this is the Savior’s gospel. When you know that … then you will know why you have to preach it His way.” For that reason, missionaries are counseled to be obedient to mission rules, he explained, adding that by so doing, they can teach with power and great authority because they will be endowed with the Spirit.

Elder Holland gave the missionaries this formula by which they can know they are measuring up to the Lord’s expectations: “Seek to be personally converted, obey the rules of the mission, strive to have the Spirit of the Lord in your life, and work hard. These are things every missionary can do.

“If you do those things, I promise you in the name of the Lord and with the authority of my office, you are a success in His eyes regardless of how many other convert baptisms you are able to have in your particular corner of the vineyard.”