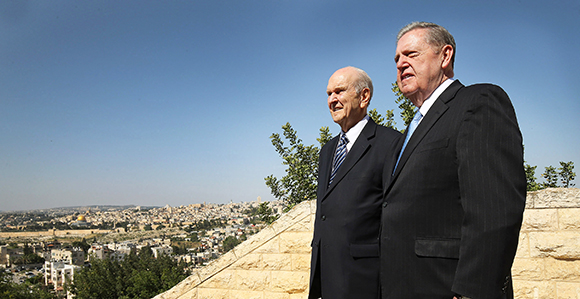 President Russell M. Nelson, left, and Elder Jeffrey R. Holland look over the view at the BYU Jerusalem Center in Jerusalem on April 14, 2018. Elder Holland spoke of the miracles that made the BYU Jerusalem Center possible during the 30th anniversary of the dedication of the center on October 11 on the BYU campus in Provo, Utah. Photo by Jeffrey D. Allred, Deseret News.

“It’s not the glass or teak wood or stone I think about most when I think of the Jerusalem Center. It is the people then and now, there and here, that through their faith and good works made it happen. That is what I think about when I consider this special place.” —Elder Jeffrey R. Holland

At 6:45 a.m. on November 14, 1985, President Gordon B. Hinckley, chairman of the Executive Committee of the BYU Board of Trustees, received an urgent phone call from BYU President Jeffrey R. Holland.

President Holland had received a series of phone calls through the night about trouble in Jerusalem regarding the construction of the BYU Jerusalem Center for Near Eastern Studies. Tensions were high in Israel for a variety of reasons, and talk of war was in the air.

Politically there was a 60-60 deadlock between two halves of a coalition in the Knesset, the Israeli parliament. A small political party had said it was willing to break the deadlock by giving its four votes in parliament to either competing prime minister and party who would “move the Mormons off Mount Scopus.”

It was a full year after the construction of the BYU Jerusalem Center had started. President Holland knew the very controversial center could be a factor in “bringing down the tenuous Israeli government.”

President Holland explained the situation to President Hinckley and desperately asked, “What do we do if we are a factor in an Israeli war with its neighbors?” President Hinckley took the issue to the temple meeting that was held with the First Presidency and Quorum of the Twelve Apostles in the Salt Lake Temple later that morning.

Following the discussion that ensued, President Ezra Taft Benson, the Church’s 13th president and not physically strong at the time, asked if he could be the voice for the prayer that day. Though President Holland was not in attendance in that temple meeting, he said some of the Brethren described President Benson as “praying at length with increasing strength.” By the end, “he was declaring. … He wasn’t praying as much as he was testifying.”

President Hinckley called President Holland after the meeting and said they had done all they could. They were to wait and see what would happen.

Then a miracle occurred. One party offered an apology to the other. Political forgiveness was granted. The offer of swing votes was declined and tensions in the Knesset were eased for the time being.

“The miracle that morning came from the fourth floor of the Salt Lake Temple where a prophet, seer, and revelator prayed safety and protection down upon something the Lord wanted done in that land.”

“That was one of 33 miracles, large or small, that happened to make the BYU Jerusalem Center possible,” Elder Holland said during the 30th anniversary of the dedication on October 11. Former students and faculty who attended the Jerusalem Center were present at the event, which was held on the campus of BYU in Provo, Utah.

Elder Holland noted the contributions of those who helped acquire the land and obtain permission to build the BYU Jerusalem Center. He highlighted the leadership of then Elders Howard W. Hunter and James E. Faust, who “gave their heart and soul to this project” under the direction of the First Presidency of the Church.

Explaining some of the pivotal moments in the history of the BYU Jerusalem Center, Elder Holland began by telling of President Harold B. Lee’s visit to Jerusalem in September 1972—the first visit to the Holy Land by a prophet in 2,000 years.

He then spoke of President N. Eldon Tanner’s mandate in 1979 to acquire what seemed to be an impossible property on Mount Scopus—the location where the BYU Jerusalem Center currently stands overlooking the Mount of Olives, the Kidron Valley, and the Old City.

While the Church was successful in acquiring the land and a building permit, “every possible opponent came out against the project” over the next several years, Elder Holland said.

One such battle occurred when the Israeli government required a non-proselytizing agreement to continue construction. During a special meeting on July 31, 1985, the First Presidency and Quorum of the Twelve Apostles counseled on how to move forward. One of the Brethren read from Mormon 3:16, noting that earlier prophets had been forbidden to preach the gospel and asking if the Church was again willing “to stand as an idle witness” in Jerusalem.

“It seemed to be a message from heaven itself,” Elder Holland said, and the Brethren signed the agreement. All students, travel visitors, and local members have loyally abided by its non-proselytizing restrictions for more than 30 years.

Following that meeting, President Holland and his wife, Patricia, traveled to Jerusalem to deliver the agreement. At the airport they were met by several hundred Yeshiva students shouting and protesting. They carried signs that read “Jeff, Go Home.” and “Jeffrey, stop your missionary work before we retaliate.” (For years some of the Brethren in Salt Lake City teased Elder Holland that he was obviously friendly enough to be on a first-name basis with his opponents.)

This encounter started a campaign of around-the-clock interview requests with media outlets from Israel, Europe, the United States, and elsewhere. In light of this extensive international coverage of his peacekeeping visit to Jerusalem, Elder Holland said he worked nonstop to “turn the tide” and make it clear to everyone that neither the Church nor the university was building a missionary center.

The Israeli government ruled in 1986 that BYU was within legal rights to build the center, and construction continued. The BYU Jerusalem Center was dedicated on May 16, 1989, by Elder Howard W. Hunter, later to be the 14th President of the Church.

At the end of his address, Elder Holland emphasized four of the many lessons he learned from the miracles of the BYU Jerusalem Center. “And I don’t use the word ‘miracle’ lightly,” he said.

Elisa Seely, who studied at the BYU Jerusalem Center in the fall of 1996, attended the 30th anniversary event in Provo on October 11. As a student in Jerusalem, she didn’t realize all that went into the construction of the center.

“The BYU Jerusalem Center is a modern-day miracle in a land of so many miracles, and that being the Savior, the Savior’s birth, His Atonement, and to have such a beautiful building,” Seely said. “It’s holy ground.”

Seely’s younger brother, Riley Cooney, studied at the BYU Jerusalem Center in winter of 2014. Cooney said the part of Elder Holland’s message that touched him the most was the potential of the Jerusalem Center.

“When I left (Jerusalem), I wanted everyone I knew to attend and to have the experience. I want others to have it who weren’t born in America or who weren’t able to go to a Church university. I would love when I have children for them to go there with people from other countries.” 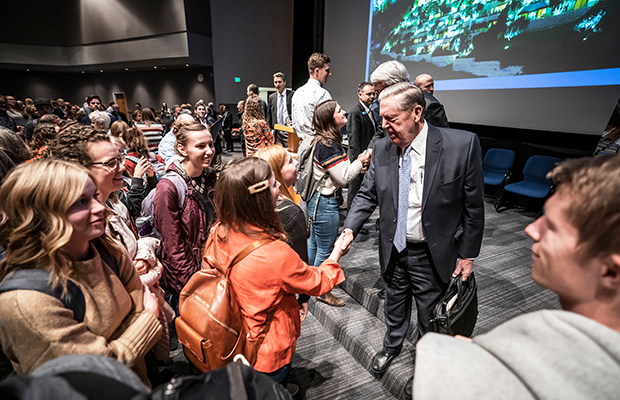 Elder Jeffrey R. Holland greets former BYU Jerusalem Center students during the 30th anniversary of the dedication of the BYU Jerusalem Center on October 11, 2019, in the Joseph Smith Building Auditorium on the BYU campus in Provo, Utah. Photo by Nate Edwards, BYU Photo. 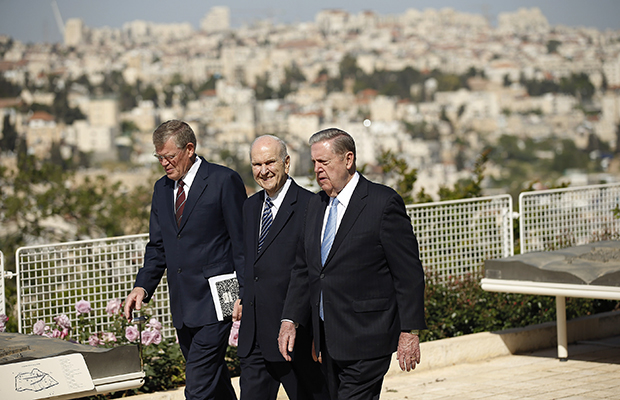 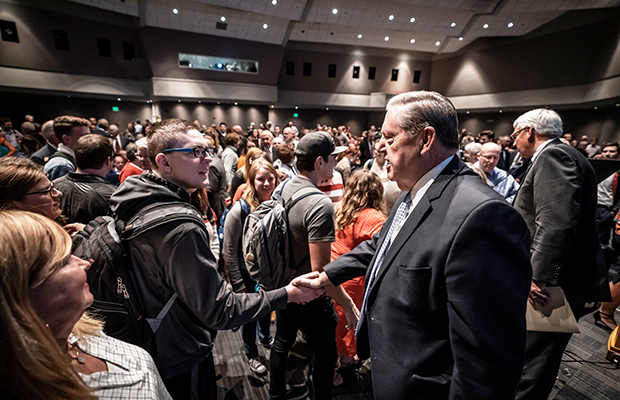 Elder Jeffrey R. Holland greets former BYU Jerusalem Center students during the 30th anniversary of the dedication of the BYU Jerusalem Center on October 11, 2019, in the Joseph Smith Building Auditorium on the BYU campus in Provo, Utah. Photo by Nate Edwards, BYU Photo.

Elder Jeffrey R. Holland speaks during the 30th anniversary of the dedication of the BYU Jerusalem Center on October 11, 2019, in the Joseph Smith Building Auditorium on the BYU campus in Provo, Utah. Photo by Nate Edwards, BYU Photo. 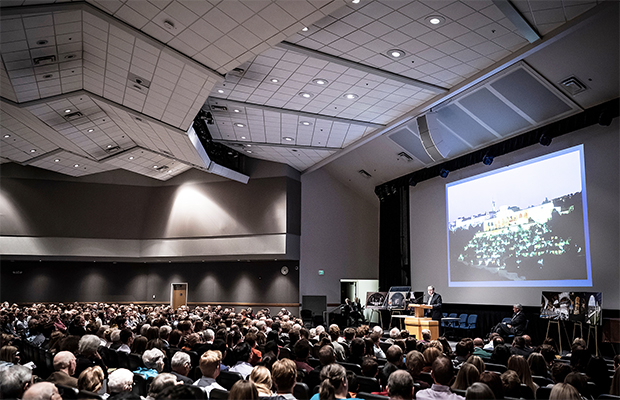 Elder Jeffrey R. Holland speaks during the 30th anniversary of the dedication of the BYU Jerusalem Center on October 11, 2019, in the Joseph Smith Building Auditorium on the BYU campus in Provo, Utah. Photo by Nate Edwards, BYU Photo. 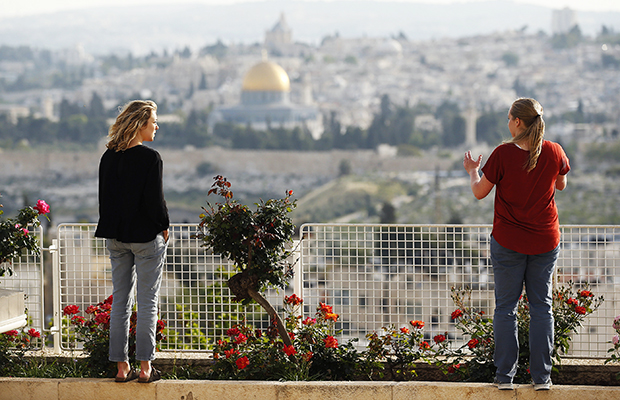 Cassidy Heaton and Chelsea Neubert, students at the BYU Jerusalem Center, look over the view of the Old City in Jerusalem on Friday, April 13, 2018. Photo by Jeffrey D. Allred, Deseret News. 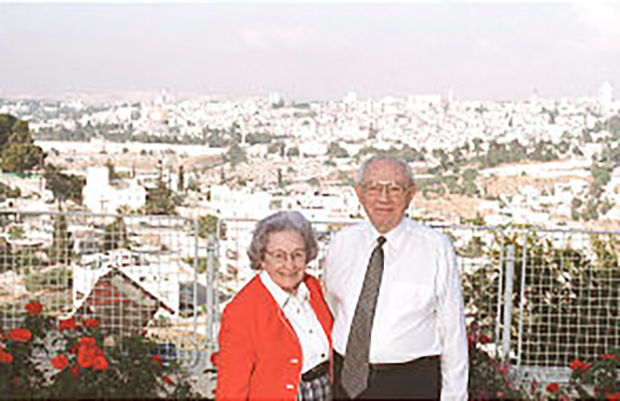 President Gordon B. Hinckley and his wife, Sister Marjorie Hinckley, at BYU Jerusalem Center in 1997. Photo by John L. Hart. 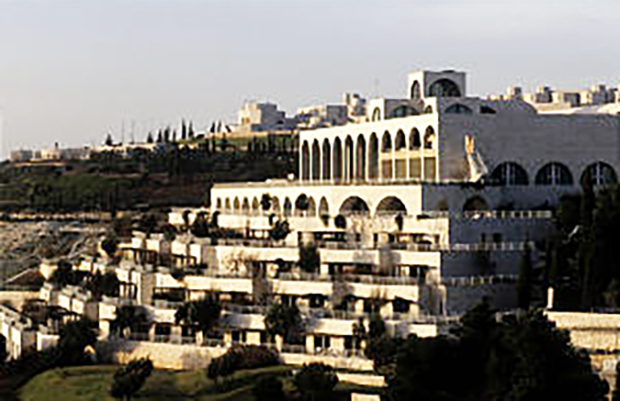 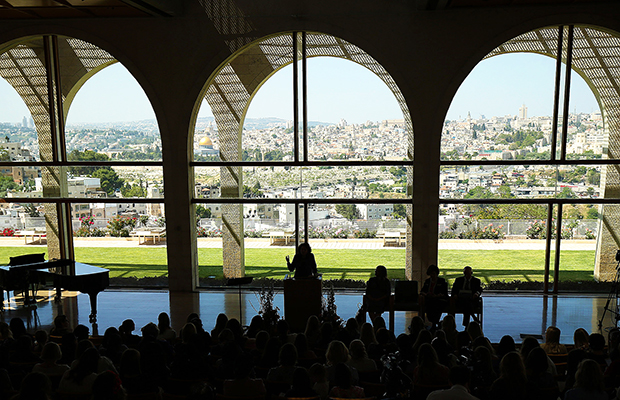