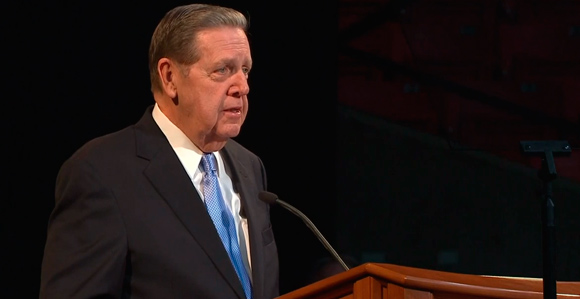 Elder Jeffrey R. Holland requested that the hymn “Israel, Israel, God Is Calling” be sung by the congregation to set the tone for his address September 9 at the Church Educational System satellite broadcast.

“It is one of the great classics of the Restoration and provides the framework for much of what I want to say to you,” said Elder Holland of the Quorum of the Twelve, speaking to the congregation on the campus of Dixie State College in his hometown of St. George and to gatherings of college-age Latter-day Saints throughout the United States and Canada.

“We could have added ‘Ye Elders of Israel’ for the same purpose,” he observed. “The message of those two hymns is essentially the same—that God is always calling the children of Israel to a place where all will be well.”

That has been the pattern for more than 4,000 years, in ancient and latter days, Elder Holland observed. “Flee and seek. Run and settle. Escape Babylon. Build Zion’s protective walls.

“Until now. Until our day. One of the many unique characteristics of our dispensation of the fulness of times—this last and greatest of all dispensations—is the changing nature of how we establish the kingdom of God on earth.”

The first was the negative reaction of fans when a college basketball player, who had once played for “the home team” in Utah but transferred (with the support of his coaches and teammates) to another school, returned with his new team to play against his former team in a Salt Lake City arena. Elder Holland spoke of the “vitriolic abuse that poured out of the stands on the head of this young man.”

Elder Holland said, “The coach of the visiting team ... turned to the player and said, ‘What is going on here? You are the hometown boy who has made good. These are your people. These are your friends.’ But worst of all he then said in total bewilderment, ‘Aren’t most of these people members of your church?’”

Elder Holland said that the next day there was some public chastisement over the incident. One young man responded, in effect, “We pay good money to see these games. We can act the way we want. We check our religion at the door.”

Commenting on that incident and response, Elder Holland said: “Lesson number one for the establishment of Zion in the 21st century: You never ‘check your religion at the door.’ Not ever. My young friends, that kind of discipleship cannot be—it isn’t discipleship at all.”

But he added a second lesson: “In my righteous indignation (at least we always say it is righteous) I have to make sure I don’t end up doing exactly what I accuse this young fan of doing—getting mad, acting stupid, losing my cool, ranting about it ... until before I know it, I have checked my religion at the door! No, ... someone in all these situations has to live his religion, or hers, because otherwise all we get is a whole bunch of idiots acting like moral pygmies.”

The test is not when things are smooth but when there is trial, temptation, pressure, fatigue, anger, and fear “or the possibility of real transgression,” he said.

The second experience, Elder Holland said, was when he arrived to speak at a stake single-adult devotional. He said he noticed a 30-something young woman who had a couple of tattoos, a variety of ear and nose rings, spiky hair of many colors, a skirt that was too high, and a blouse that was too low.

“However one might respond to that young woman, the rule forever is that it has to reflect our religious beliefs and our gospel commitments,” he remarked. “Therefore, how we respond in any situation has to make things better, not worse. ...

“We start by remembering she is someone’s daughter here on earth as well and could, under other circumstances, be my daughter. We start by being grateful she is at a Church activity, not avoiding one. In short, we try to be at our best in this situation in a desire to help her be at her best.”

At the same time, while reaching out to help “a lamb who has strayed, we also have a profound responsibility to the 99 who didn’t—and to the wishes and will of their Shepherd,” he said.

“My young brothers and sisters, this Church can never ‘dumb down’ its doctrines in response to social goodwill or political expediency. It is only on the high ground of revealed truth that gives us any footing on which to lift another who feels troubled or forsaken.”

The third experience was a conversation he had with Isaac Freestone, a police officer by profession and a high priest in the Liberty Missouri Stake. Brother Freestone told of having been called one evening to investigate a complaint in a particularly rough part of the city. In an atmosphere of loud music and the smell of marijuana, he found a woman and several men drinking and profaning.

Five children, aged about two through eight, were huddled together in one room on a dirty floor with no bed, mattress, pillows, “no anything.” Brother Freestone searched the kitchen cupboards and refrigerator but failed to find any food of any kind. “The dog barking in the back yard had more food than those children did.”

Brother Freestone did what he could for the children and prayed to Heavenly Father for their protection. One of the children, about age six, grabbed his hand and pled, “Will you please adopt me?”

The officer put the child back in bed, found the stoned mother (the men had fled the scene), and said he would be back the next day “and heaven help you if some changes are not evident by the time I walk back in that door. And there will be more changes after that. You have my word on it.”
Elder Holland remarked: “All of us should care for the welfare of others and the moral safety of our extended community. ...

“If we don’t take gospel blessings to our communities and our countries, the simple fact of the matter is we will never have enough policemen ... to enforce moral behavior even if it were enforceable.”

He added that it is not just the children in the home who are sons and daughters of God. “That mother, more culpable because she is older and should be more responsible, is also a daughter of God. Such situations may require tough love in formal, even legal ways, but we must try to help when and where we can, because we are not checking our religion at the door, even as pathetic and irresponsible as some doors are.”

Church members cannot solve every social problem, “but we can do something,” Elder Holland said. “And in answer to God’s call, the children of Israel are the ones to do it—not to flee Babylon this time but to attack it. Without being naive or Polyannaish about it, we can live our religion so broadly and unfailingly that we find all kinds of opportunities to help families, bless neighbors, and protect others, including the rising generation.”

Elder Holland said studies have shown that the age-group of his listeners—18–30—is the time in life people are most likely to accept the gospel if it is presented to them.