Elder Holland Reports Brazil Is “a Nation on the Move” 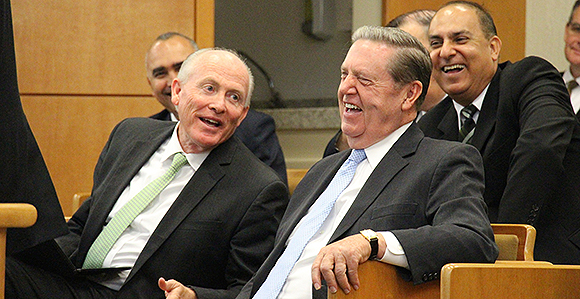 Elder Jeffrey R. Holland of the Quorum of the Twelve Apostles and Elder Richard J. Maynes of the Seventy share a laugh with other Church leaders during a visit to Brazil August 14-24.

“Brazil is on a strong, upward trajectory in terms of Church maturity. It has to be considered one of the strongest areas of the Church as we move into the 21st century.” —Elder Jeffrey R. Holland of the Quorum of the Twelve

The visit was “a wonderful opportunity for all the members,” said Elder Claudio R. M. Costa of the Seventy and President of the Brazil Area. “They were very happy, grateful, and full of emotion. They felt the love Elder Holland has for them.”

During the 10-day visit, Elder Holland visited Belo Horizonte, Sao Paulo, Santos, and Rio de Janeiro—the site of a future temple in Brazil. He was accompanied by Elder Richard J. Maynes of the Presidency of the Seventy and members of the Brazil Area Presidency: Elder Costa and his counselors, Elder Jairo Mazzagardi and Elder Marcos A. Aidukaitis of the Seventy.

“Brazil is on a strong, upward trajectory in terms of Church maturity,” Elder Holland said. “It has to be considered one of the strongest areas of the Church as we move into the 21st century. A large part of their priesthood leadership are returned missionaries, and a large number of their women leaders have served missions as well. It is a nation on the move spiritually.”

Elder Maynes accompanied Elder Holland to Belo Horizonte and Rio de Janeiro for multistake priesthood leadership meetings. He also met with the full-time missionaries as well as new converts and members in the city of Manaus on the Amazon River.

Regarding this trip with Elder Holland, Elder Maynes said, “It was a true delight to accompany Elder Holland, an Apostle of the Lord Jesus Christ, as he fulfills the apostolic mandate found in Doctrine and Covenants 107 to be ‘special witnesses of the name of Christ in all the world.’ The investigators, new members, members, full-time missionaries, and leaders who attended the various meetings clearly felt the power of Elder Holland’s apostolic witness.”

Elder Costa noted that members came to meetings—even during the middle of the week—in great numbers to hear Elder Holland. “They met with Elder Holland at every opportunity. They came with great happiness in their hearts.”

Many who heard Elder Holland speak are new members of the Church; a large majority had never seen an Apostle before. Elder Costa said he received many emails from local leaders who said Elder Holland spoke to the hearts of the people.

Elder Holland held a priesthood leadership conference and a member devotional in Belo Horizonte, where he also attended a stake conference.

“With the members he talked about conversion, about having true faith in the Lord Jesus Christ,” said Elder Costa.

Elder Holland had the opportunity to meet with six mission presidents, 63 stake presidents, and five Area Seventies during a leadership meeting in Sao Paulo.

“The purpose of the meeting was to listen to them and learn about the Church here in Brazil,” said Elder Costa.

He said Elder Holland spoke to the leaders about helping the gospel sink deep in the hearts of the people to edify them spiritually.

Elder Holland also addressed the missionaries in the MTC in Sao Paulo.

He paid tribute of the late President James E. Faust, a counselor in the First Presidency, who was among the first missionaries to serve in Brazil from 1939 to 1942. He returned to live there from 1975 to 1977 while, as a General Authority, he oversaw the Church’s progress in South America. Later President Faust received the honorary title of “Citizen of Sao Paulo.”

“President Faust had a tremendous impact on me, almost like a father,” Elder Holland reminisced. “He imbued me with his great love for Brazil and Brazilians.”

Elder Holland spoke to the missionaries about his own mission experience.

“No young man was more blessed in the mission field than I was,” he said, noting that he still remembers many things he learned as a young missionary.

He spoke of a small city in England where he served as a young elder. At that time the entire region had only a few hundred members. Yet years later, he had the honor to preside over a huge stake conference where once there were so few members.

“The gospel of Jesus Christ means everything to me,” he told missionaries and members gathered in the city.

Some 2,000 people in Santos gathered for the midweek meeting with Elder Holland. Elder Costa said the Church members in the congregation were reverent—even the small children. “Everyone shared a great desire to be taught by an Apostle.”

Members in Rio de Janeiro are happy that the Church is planning to construct a temple in their city, said Elder Costa. “They are anxiously waiting for the groundbreaking.”

Elder Costa said Sao Paulo and Rio de Janeiro are large cities with millions of residents. “Life is busy,” said Elder Costa. “Traffic is crazy. Sometimes it is difficult for the members to go from one part of the city to the other. But the members are very faithful. They are trying to do their best. Brazilians love Christ. They love the Church. They are faithful.”