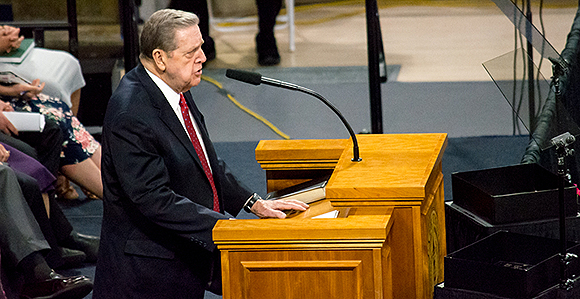 Elder Jeffrey R. Holland of the Quorum of the Twelve Apostles speaks at a devotional at Utah State University sponsored by the Logan Institute of Religion on September 22, 2019. The Dee Glen Smith Spectrum was filled to capacity. Photo by Iain Laurence, The Utah Statesman.

“You have a sure thing. It is fixed. Secure. Promised. Firm. Nailed with the certainty of Roman nails on a wooden cross. … That’s why you can with total confidence . . . embrace the future with joy.” —Elder Jeffrey R. Holland

In every previous dispensation people faced tragedy, apostasy, and destruction. Yet, they did not see the gospel succeed, Elder Jeffrey R. Holland explained.

What gave them the courage to persevere?

“My theory is that those great men and women in past dispensations were able to keep going, to keep testifying, to keep trying to do their best, not because they would succeed but because they knew you would!” he said. “I believe the courage and hope they had came not from their day but from yours.”

Speaking to 11,000 students in the Dee Glen Smith Spectrum arena on the campus of Utah State University in Logan, Utah, on September 22, Elder Holland of the Quorum of the Twelve Apostles charged young adults to “be of good cheer” despite the trials of the last days.

The blessings of this generation are “unparalleled,” and with that advantage comes a responsibility to build Zion and choose Christ, he said.

“In the entire history of humankind, there have never been so many advantages bestowed on one era in so many different ways,” said Elder Holland, listing advancements such as medicine, transportation, and technology during the devotional, sponsored by the Logan Institute of Religion.

Modern-day prophets including Joseph Smith, Wilford Woodruff, and Gordon B. Hinckley testified of the anticipation for this season since the world began. But rather than focusing on the challenges or problems of this day, these prophets emphasized the blessings, responsibilities, and destiny of the latter days, Elder Holland pointed out.

Moroni, too, saw the “great and marvelous things” of these days.

“Well, I think virtually all of the prophets and early apostles had their visionary moments of our time—a view that gave them courage to keep trying in their own unsuccessful eras on the strength that your generation would be successful,” the latter-day Apostle said.

The world is challenging and will get more challenging, Elder Holland cautioned. But it is possible to be cheerful because the victory has already been won. Never again will the priesthood keys and true doctrine of Jesus Christ be taken from the earth.

“For more than 4,000 years of covenantal history, this has been the pattern: Run. Hide. Flee. Escape Babylon. Establish a new Zion. Flee again. Until now. Until this our day, this day that those ancients saw and cheered over,” he said.

Zion isn’t “where” we live; it’s “how” we live, Elder Holland emphasized. This responsibility to build Zion is a prophetic mandate, what President Russell M. Nelson calls the “gathering of Israel.” 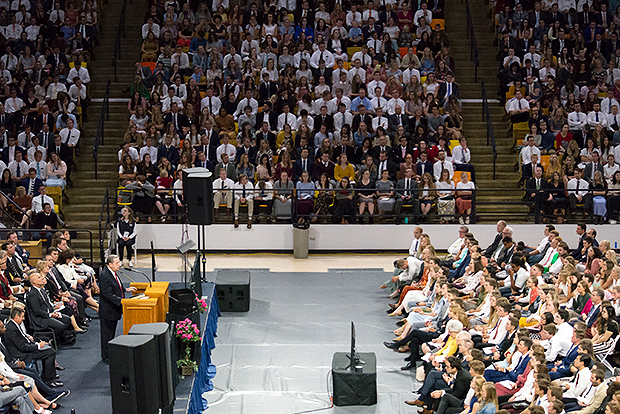 Elder Jeffrey R. Holland of the Quorum of the Twelve Apostles speaks at a devotional at Utah State University sponsored by the Logan Institute of Religion on September 22, 2019. The Dee Glen Smith Spectrum was filled to capacity. Photo by Iain Laurence, The Utah Statesman.

As the Church grows and becomes more visible and influential in society, it is important to realize the Church has not and will not always take popular positions, Elder Holland said. Some issues may lead to misunderstanding for some.

While God is the ultimate judge, he explained, life is filled with choices between right and wrong. And the commandment to “judge righteous judgment” means doing so with kindness and respect, taking a stand the way the Lord would.

“None of us want to offend those who believe differently from us, but we are commanded to be even more anxious about not offending God.”

Elder Holland reminded young adults that they can “be of good cheer” amidst the social, behavioral, and moral issues of today because there is guaranteed victory of good over evil and light over darkness.

While the victory has been won, “we are still waiting to see who is going to play for what team,” he said, counseling listeners to choose Christ.

“Just be smart. You have a sure thing. It is fixed. Secure. Promised. Firm. Nailed with the certainty of Roman nails on a wooden cross. … That’s why you can with total confidence go on a mission and get an education, get married, and have children (and) embrace the future with joy.”

Elder Holland closed his devotional address by quoting President Nelson: “We live in a world that is complex and increasingly contentious … (but) our Savior and Redeemer, Jesus Christ, will perform some of His mightiest works between now and when He comes again.”

Those mighty works will be evident for those who stay on the winning side, Elder Holland testified. 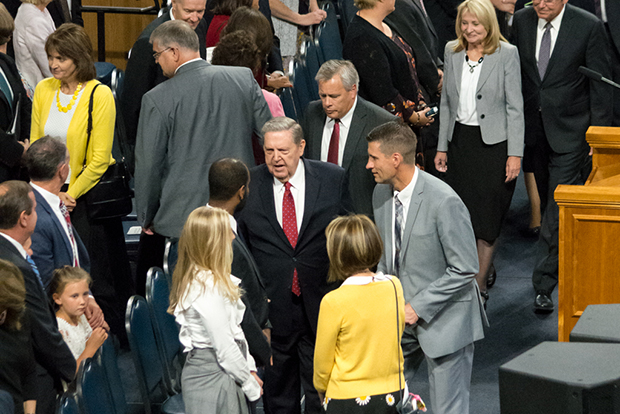