Elder Holland, Elder Callister Testify of Christ in the Philippines 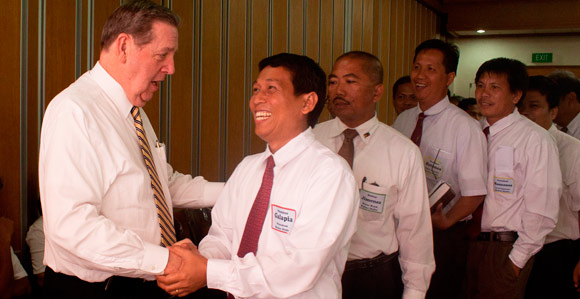 “What we believe about [God] is that when we’re sad, He’s sad, and when we weep, He weeps … because He loves us so much. But tonight a wonderful, encouraging reminder also is that when we’re happy, He’s really, really happy, and I can’t imagine He could be happier in His heavenly realm tonight than He is happy with you.” —Elder Jeffrey R. Holland, to youth in the Philippines

On October 14, 2011, Elder Jeffrey R. Holland of the Quorum of the Twelve Apostles and Elder Tad R. Callister of the Presidency of the Seventy arrived in the Philippines, where they conducted a series of leadership trainings and devotionals, as well as an area audit.

Elder Holland began by acknowledging that as the Church grows, it becomes more difficult for the leaders of the Church to meet all of the members. He said that because there are now nearly 2,900 stakes in the Church, members of the First Presidency and Quorum of the Twelve Apostles could visit each stake only once every 29 years.

Elder Holland emphasized the importance of “people with keys staying in contact with people with keys” to keep the line of communication open between the First Presidency and Church leaders.

Expressing his gratitude for their sacrifice and service, Elder Holland told priesthood leaders, “You are the miracle of the Church.”

He then emphasized that priesthood leaders are not called to be managers, but to be witnesses and disciples of Jesus Christ.

He compared the gospel to a pearl of great price, housed within a lovely box.

“The boxes of our lives are important … but the box is not the main message,” he said. We should “keep in mind the gospel; the love of our Father in Heaven; the eternal gift and magnitude of the Savior in our lives; His birth, Atonement and Resurrection; and the plan of salvation.”

Budgets, reports, statistics, and meetings are important, Elder Holland reiterated, but it will all be worth nothing if we do not cultivate faith in the Lord. The best way we can spend our time, he said, is in helping others to have spiritual experiences.

Following Elder Holland’s remarks, Elder Callister addressed those present on the topics of marriage, family, and the rising generation. He advised priesthood leaders to “set in order your own house” (D&C 93:43) and to lead out in family activities. “You can’t serve well in the Church unless you become a good father and husband first,” he said.

At the end of the meeting, priesthood leaders were able to have an open discussion with Elder Holland.

On Thursday, October 20, Elder Holland, Elder Callister, and Elder Teh met with missionaries in the Philippines Cebu Mission. Mission president Evan A. Schmutz and his wife, Cindy, were also in attendance.

During Elder Holland and Elder Callister’s visit, local youth from various stakes in Manila gathered for a small cultural celebration, similar to the Jubilee Cultural Celebration held in April.

The youth performed 11 dances—some of which involved dancing on top of benches or using clicking bamboo poles—which were followed by a medley of Filipino songs sung by an adult choir and a rendition of the Jubilee theme song, “United,” by a quartet.

Remarking that he was happy he didn’t have to repeat the complex dance moves, Elder Holland addressed the youth following the performances.

“What we believe about [God] is that when we’re sad, He’s sad, and when we weep, He weeps . . . because He loves us so much. But tonight a wonderful, encouraging reminder also is that when we’re happy, He’s really, really happy, and I can’t imagine He could be happier in His heavenly realm tonight than He is happy with you,” Elder Holland said.

Reminding youth that they are Heavenly Father’s children, he implored them to never leave the Church. He said they can find true happiness only in the gospel of Jesus Christ.