Elder Holland Connects with Thousands of Members in Japan, Korea, and the Micronesia Islands 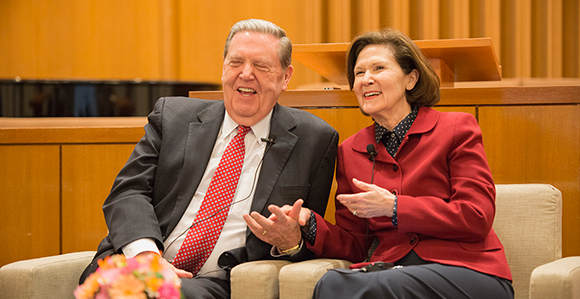 Elder Jeffrey R. Holland was called to the Quorum of the Twelve Apostles 23 years ago. He’s been a General Authority for almost three decades.

His broad ecclesiastical duties have made him something of a globetrotter in a white shirt and tie—traveling far and wide to testify of Jesus Christ and to minister to the many Latter-day Saints across the world.

But occasionally he can still discover a new land, meet new people, and return home blessed with new friends. During a recent trip to the Church’s Asia North Area, he visited, for the first time, the American island-territory of Guam in the western Pacific.

He and his traveling companion, Sister Patricia Holland, were uplifted by the members in Guam—and by their many fellow Latter-day Saints they met with in Japan and Korea during their 10-day tour (February 17–26) of the area.

“We were delighted to see the conspicuous strength of the members and the growing maturity of the leaders, both men and women, in the area,” Elder Holland told the Church News.

The Hollands were joined in their travels by members of the Asia North Area Presidency—Elder Scott D. Whiting, Elder Kazuhiko Yamashita, and Elder Yoon Hwan Choi of the Seventy—along with their wives, Sister Jeri Whiting, Sister Tazuko Yamashita, and Sister Bon Kyung Choi.

Gathering with the Saints

The trip included stops in the Japanese cities of Nagoya, Tokyo, and Sendai; the Korean capital city of Seoul; and Tamuning, Guam.

“The meetings were all spiritually powerful experiences,” reported Elder Holland, who worked closely with the Area Presidency to identify local issues of concern to make each gathering as relevant as possible.

Live nationwide broadcasts of devotionals in Japan, Korea, and the regions of Guam and Micronesia, he added, “offered us the largest possible reach for our messages.”

Devotionals for young single adults and single adults in Japan and Korea were also broadcast across those nations. At each gathering, single members submitted questions for Elder Holland, Sister Holland, and the members of the Area Presidency and their wives.

Their questions were earnest and direct. Many focused on marriage and families, on sharing the gospel with family and friends from non-Christian cultures, and about remaining faithful during turbulent times.

“There were also questions about their future—and we were able to reassure them of a [bright] future,” he said.

The February 22 regionally broadcast devotional for members in Guam and the Micronesian Islands was a historic highlight for the visiting Brethren and their wives.

The Latter-day Saints in that vast region are a mixture of local islanders and American servicemen and women. They speak several languages and hail from many cultures, making missionary work more complex than usual.

“But the members and missionaries there are working very hard,” observed Elder Holland. “They have challenges, but they are doing all they can do and having success.”

Elder Whiting said the members were thrilled to connect with Elder and Sister Holland.

“The blessing of technology made it possible for most members to participate live in these events held over a period of several days,” he added. “Whether participating live or via broadcast, all were uplifted and felt nearer to the Savior as Elder Holland taught from the scriptures and made them come alive with his knowledge, insights, and powerfully expressed testimony.”

Unity among the missionaries and members

Elder Holland said being with many of the missionaries in the Asia North Area was a key priority and a unique blessing. He presided over mission conferences in Nagoya, Sendai, Guam, and Seoul.

Members of the Quorum of the Twelve Apostles and the full-time missionaries share special connections. “We identify with one another. We are both witnesses and messengers.”

Elder Holland added he and his fellow Apostles know from personal experience just how demanding missionary work can be. “We love the missionaries so much, and we know they sometimes need a boost.”

When asked to reflect on his recent assignment in the Asia North Area, Elder Holland said the unity, closeness, and community he discovered each time he gathered with members and missionaries left him fortified. 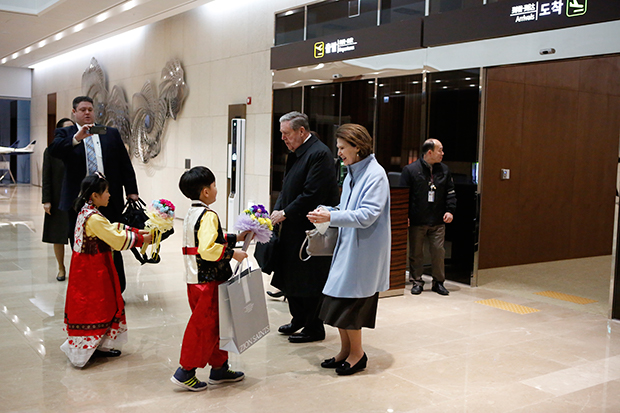 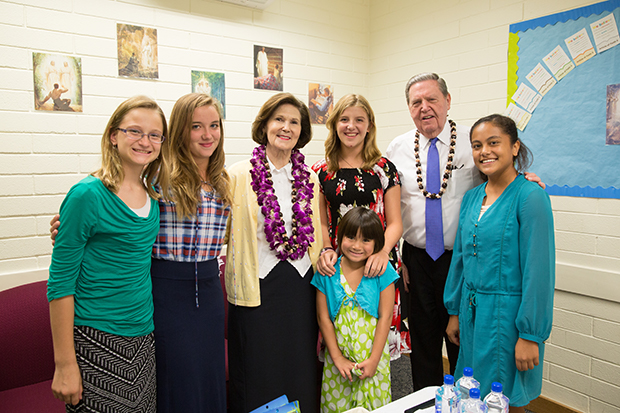 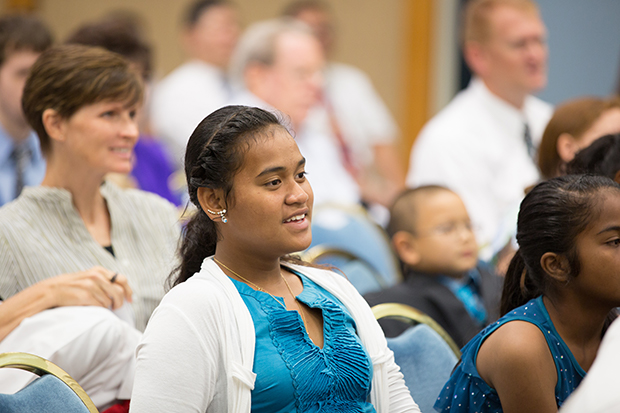 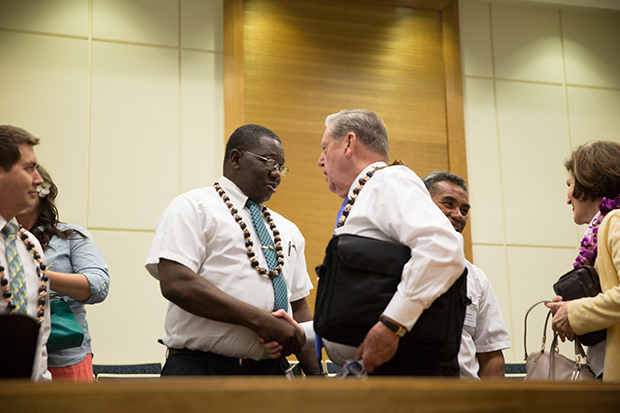 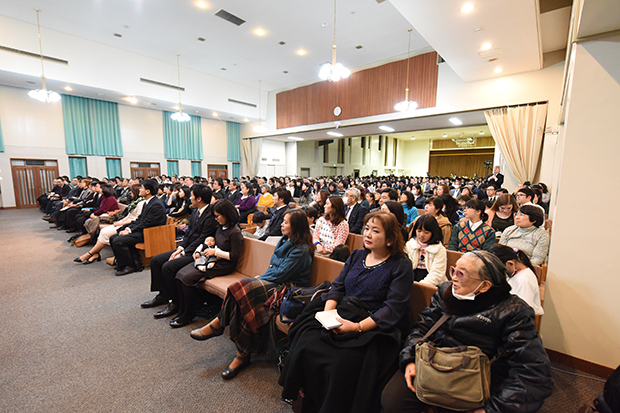 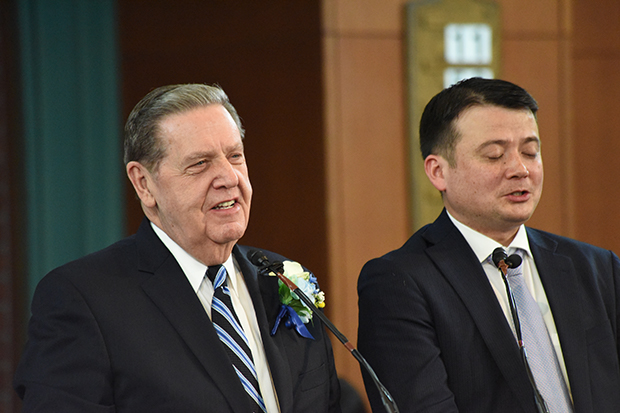 Elder Jeffrey R. Holland offers words of encouragement and support at a member devotional at the Musashino Japan Stake Center February 19, 2017. The meeting was broadcast across the country. Photo courtesy of Asia North Area. 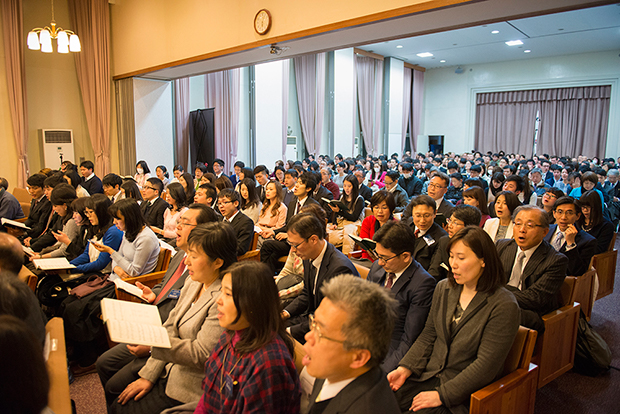