Elder Gary E. Stevenson: A Life of Constancy and Service 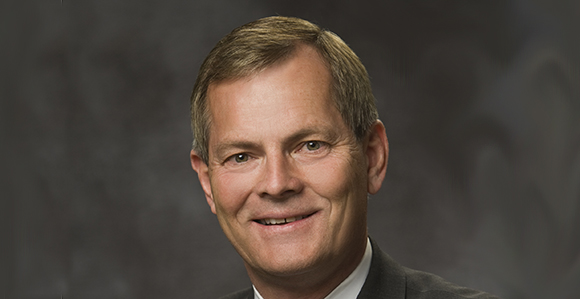 Elder Gary E. Stevenson of the Quorum of the Twelve Apostles.

“Keeping the commandments brings blessings, and blessings bring happiness.” —Elder Gary E. Stevenson of the Quorum of the Twelve

When (then) Presiding Bishop Gary E. Stevenson received a telephone call from the Office of the First Presidency on Tuesday morning, he thought, “I knew it!” and was certain he was being informed that one of his counselors would be called to fill one of the vacancies in the Church’s Quorum of the Twelve Apostles. What followed was “a knee-buckling moment for me,” he said. “It was a very sweet, short experience with the First Presidency. It was not something that I had expected.”

Since that time, Elder Stevenson has drawn comfort from a scripture from the Doctrine and Covenants: “And whoso receiveth you, there I will be also, for I will go before your face. I will be on your right hand and on your left, and my Spirit shall be in your hearts, and mine angels round about you, to bear you up” (D&C 84:88).

That verse of scripture has been a pattern for the life of Elder Gary E. Stevenson, who was sustained on Saturday, October 3, 2015, as a new member of the Quorum of Twelve Apostles (Elder Stevenson, in seniority, is the 11th of the 12 Apostles in the Quorum).

From his childhood in Cache Valley, Utah, Elder Stevenson has tried to seek wisdom from the Lord and to be diligent as he balanced his responsibilities as a husband, father, Church leader, and businessman. He has approached his life and Church service with a very simple philosophy: “Keeping the commandments brings blessings, and blessings bring happiness.”

“I’ve often said that I feel like I was blessed to have a sense of the truthfulness of the gospel, really from my earliest memories, and something that instilled in me the desire, the duty to live the gospel and every day try to do that,” Elder Stevenson said as he described his life and how the Lord has tutored him and prepared him to serve as an Apostle. “Balance was probably one of the great lessons. When you’re going through something that can be so consuming, what do you do to make certain that you maintain a balance of family, of profession, and of Church calling? And then making certain that you take care of yourself as well? Those are the challenges and the struggles that people face. I think that’s been a great preparation and something that really blessed us.”

More than nine years of Elder Stevenson’s life have been spent living in Asia. As a young missionary, he served for two years in the Japan Fukuoka Mission. “Missionaries develop a love for the people and the place.” Later, he would return to Asia many times on business, and then he served as the mission president of the Japan Nagoya Mission (2004–2007) and as Area President of the Church’s Asia North Area (2008–2012). “It’s really my second home,” he said. “I’m very, very comfortable in Asia.”

When a major earthquake hit Japan in 2011, Elder Stevenson was serving as the Area President of that region and experienced a “defining moment” in his life. “We knew immediately that this portended to something really big somewhere on the island. To see the destruction, to see the loss of life, to walk the streets and see it and feel it and be with people who were affected with family members that were gone and to be able to see a response and to help shape a response—that was a manifestation of the Church of Jesus Christ filling one of its divinely appointed responsibilities of caring for the poor and needy. If there were people that were needy, this was them.” He described it as a sacred privilege to be able to “go and minister and bless and organize assistance. There was so much we learned about the goodness of humanity.”

Elder Stevenson is married to Lesa Jean Higley, whom he met in an Old Testament course at Utah State University. They were married in the Idaho Falls Temple in April of 1979 and have raised four sons, who filled their home with friends, food, and “constant activity.” As a family, the Stevensons enjoy spending time together in the outdoors. Skiing, snowboarding, hiking, and other outdoor activities are at the heart of every family gathering.

When asked how this call had changed his plans for the future, Elder Stevenson spoke of this new role as simply an “extension of that commitment that was already in place. It’s what faithful members of the Church do. It changes plans, but we’re [each] part of the Lord’s plan.” Sister Stevenson, in describing her companion of more than 36 years, quoted the following scripture: “Wherefore, be faithful; stand in the office which I have appointed unto you; succor the weak, lift up the hands which hang down, and strengthen the feeble knees” (D&C 81:5). “That is the scripture he constantly quotes, and that’s how he has lived his life.”