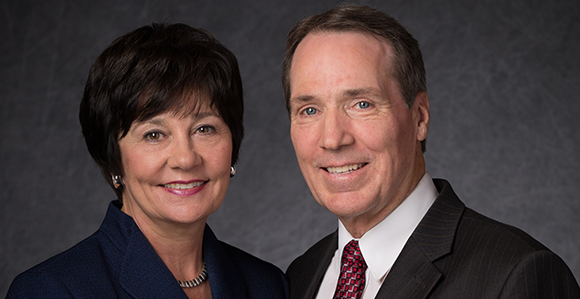 Education
Earned an associate’s degree and a bachelor’s degree from BYU and a master’s in management from Stanford University.

Community Service
Formed Sabin Children’s Foundation, an organization dedicated to addressing the medical needs of children across the globe.

In his lifetime, Elder Gary B. Sabin has had six “guiding thoughts.”

The first came at age 18 as he was contemplating missionary service: “What if it is all true?” As a result of this thought, he “committed to paying the price to find out.”

The second thought came after his mission and a marriage proposal to Valerie Purdy: “She said yes.” That thought changed the course of his life.

Following marriage, the third thought was an indication his life had changed again: “I am a father.”

The fourth came as his teenage daughter, who suffered from cystic fibrosis, prepared for a double-lung transplant just one year after her brother died from the same disease: “Nobody really dies,” he thought. Knowing “I would see my children again and that families are eternal” sustained him through this time.

“God is my Father,” was Elder Sabin’s fifth guiding thought. “Most people in the world have no idea who God is. … Our true identity puts everything in perspective,” he explained.

And finally, the sixth thought: “Service sanctifies.” Elder Sabin said that a person serves because they love, but they are in a wonderful way the ultimate beneficiary.

As a child, Gary—dubbed by some as a “freckled-face Tom Sawyer”—was an active boy. He spent his youth in Orem, Utah, catching frogs, building huts, and climbing trees. Once he tried to fly by tying a sheet to both arms and jumping off the roof of the house. “It didn’t work,” Elder Sabin recalled with a grin.

But he did have great success in baseball, tennis, and swimming. He also liked to fish and hunt and ride dirt bikes and motorcycles. He had a newspaper route to pay for his electric guitar.

“I was a regular Utah boy who liked to be outdoors,” he recalled.

During high school he went on a double date. His friend’s date was Valerie Purdy.

“I thought he was really quite nice; we became acquainted,” she recalled.

But the teenage Gary “had an idea” that she was very special.

Still, he knew there was something he had to do before he could get to know her better. He sold his motorcycle and submitted his mission papers. A young Elder Sabin served in Belgium and the Netherlands from 1973 to 1975.

“We saw the work in [the mission] grow from nothing to little units of the Church,” he recalled. “It was a sweet experience. I was so fortunate to know the purpose of life and why I was here.”

When he returned from his mission, he called Valerie and the couple began dating. They married on August 18, 1976.

“We knew so strongly we were supposed to marry each other,” said Elder Sabin, noting that this sure knowledge sustained the couple as some of their children were born with a life-shortening genetic disease, as mentioned above.

The Sabins are the parents of five children; a sixth child was stillborn.

After their second child, Justin, began having health problems, the couple learned they were each carriers of the gene for cystic fibrosis. Each of their children had a 25 percent chance of inheriting the genetic disease. Three of the Sabins’ five children were born with cystic fibrosis. “We have great confidence in the eternal plan for our family,” said Elder Sabin.

Justin died of cystic fibrosis on April 22, 1998, at the age of 19. A year later, it became obvious his little sister, Jennifer, would need a double lung transplant. The Sabins’ bishop, Graham Bullick, and ward member, Jim Davies, offered to become live donors and give part of their lungs to Jennifer. Their story is documented in an October 2006 Ensign article titled “The Breath of Life.”

It was hard for the Sabins, who wanted to donate their lungs to their daughter but were not a match, to describe their gratitude for this life-saving act. “It is hard to put into words the gratitude you feel,” said Elder Sabin. The act was in many ways symbolic of the Atonement because a life-saving deed was done for the family that they could not do for themselves.

The Sabins will always remember how their ward and stake rallied to help their family through that time. The family also learned to view life with an “eternal view” and focused on enjoying each day.

“Life is sweet when you are grateful,” said Elder Sabin. “We have learned a lot more from our children than they have learned from us. They are our heroes.”

Elder Sabin said one thing that helped the family through those years was the sustaining influence of his wife, who shouldered much of the responsibility for the children’s health needs. Sister Sabin had graduated from BYU in elementary education and served a full-time mission in Taiwan.

Elder Sabin—who earned an associate’s degree and a bachelor’s degree from BYU, then a master’s in management from Stanford University—had many responsibilities outside the home. He started and ran several successful public companies, some of which were traded on the New York Stock Exchange.

In 1993, Elder and Sister Sabin formed Sabin Children’s Foundation, an organization dedicated to addressing the medical needs of children across the globe.

“We know the Church is true,” said Sister Sabin. “We have always known that.”

Quoting the late Elder Neal A. Maxwell of the Quorum of the Twelve Apostles, Elder Sabin said the family has tried to follow this inspired direction: “Don’t fear, just live right.”