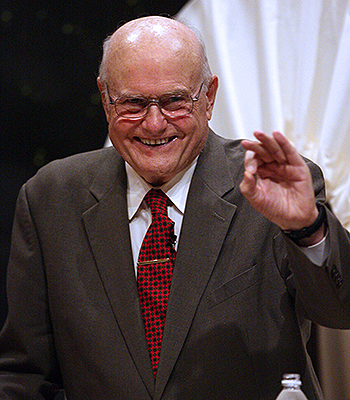 F. Enzio Busche speaks on the theme “Story of My Life” for the Evenings at the Museum series at the Church History Museum in Salt Lake City on Saturday, June 26, 2010. Photo by Kristin Murphy, courtesy of Church News.

Elder F. Enzio Busche, an emeritus General Authority Seventy of The Church of Jesus Christ of Latter-day Saints, died Thursday morning, May 28, in Bountiful, Utah, at the age of 90.

Born in Dortmund, Germany, on April 5, 1930, Elder Busche grew up with four sisters in a home built by his father. In 1939, however, with the beginning of World War II, his family fled from their home in western Germany to southern Germany, where it was considered safer and where they shared a home with several other families.

At age 10, Elder Busche joined the Hitler Youth organization before being drafted as a soldier at the age of 14, when the war was nearing its end. After being captured and taken to an American prison camp at the war’s end, he was allowed to return home.

In 1946, schools in Dortmund began to reopen and Elder Busche returned to school. He attended university in Bonn and Freiburg, Germany, before going to work for his father’s small printing business.

In 1955, Elder Busche married his childhood sweetheart, Jutta Baum. After many years of struggle and searching for spiritual truth in their lives, the couple were introduced to the missionaries. After a long period of being taught by the missionaries, both Elder and Sister Busche were baptized on January 19, 1958, in a public swimming pool in Dortmund.

Following his conversion, Elder Busche became a leader in his Church community in Dortmund. In 1977, he served as a translator for President Spencer W. Kimball, who was touring through Poland and East Germany.

During his visit, President Kimball called Elder Busche to serve as a member of the First Quorum of the Seventy. He served initially as the president of the Germany Munich Mission before being called to serve in Utah.

The gospel changed the lives of Elder Busche and his family drastically. It called him away from his home and culture, but he regularly expressed his gratitude for the gospel in his life.

“The adversary’s greatest power is to give us fear, to tell us that what the Lord requires will be too uncomfortable, too impossible to do. But as we obey, the Lord will fill us with love and inexpressible joy,” Elder Busche said in a Church interview. “When we do subdue ourselves to his will, we are filled with peace and dignity in all circumstances, no matter how challenging. This, to me, is the greatest victory we can achieve.”

Elder Busche is survived by his wife, Jutta; their daughter, Maja; their 3 sons, Friedrich Markus, Matthias, and Daniel; and 17 grandchildren.